Little known facts:
1.              1.        George Lumley, aged 104, married Mary Dunning, aged 10, in Nortallerton, England on August 25, 1783. She was the great-great granddaughter of the woman who'd broken her engagement to Lumley, eighty years before.
2.    In Elizabethan England, the spoon was so novel and prized that people carried their own folding spoons to banquets.
3.    It costs more to buy a new car today in the United States than it cost Christopher Columbus to equip and undertake three voyages to and from the New World.

How many pencils and pens does one man need? I have a square glass container. It is about 4” square and it is jammed with wooden pencils and ball point bens. Of course the felt tip markers both large and small. When a pen starts skipping I seem to want to give it another chance and put it back.


I replaced the fillers for years, now there are so many sizes it is most impossible to have a good replacement handy.  Now I DO throw pens away, but I have to be in the right mood. HA!

I bought a ‘real pencil sharpener’ awhile back. That sucker sharpens a pencil to a dangerous point, it actually has a pen point which usually breaks with the first use. LOL

Stella gave me ‘My own round eraser.’  The erasers on the pencils are so old they are hardened. My little area beside my monitor where the pencil holder sits, looks like a disaster area, Imma fix it! 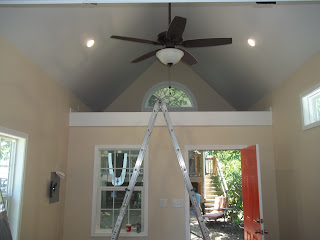 (There is a loft like this at both ends of the little house.)


I worked today installing some railings at the storage building over at grandson Josh’s place, that son Mark built. He did a fantastic job.

There is an open loft at both ends and it is 9’ high. The plans show no railing. The inspector did not come Friday and as I busied myself Imma thinking, “He is going to call me on the open lofts.  There is a national building code that requires a three foot railing on any surface with more than a 30” drop.  Although there is no way up to the lofts (other than a ladder) I doubt if he will pass it and I do not need another delay.  So I invested in a few boards to make railings. 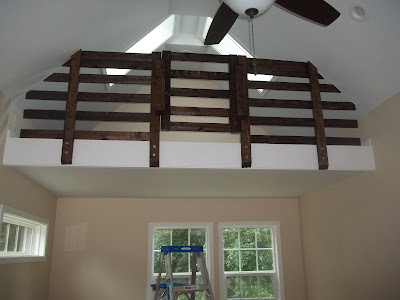 They are not pretty or classy, but they are sturdy! 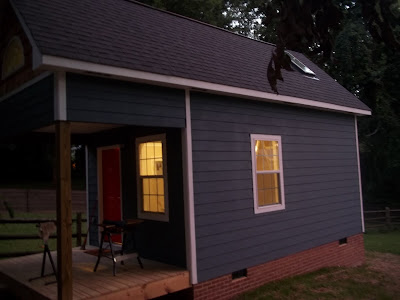 (It is a pretty little house. They are calling it the Art and music Room) 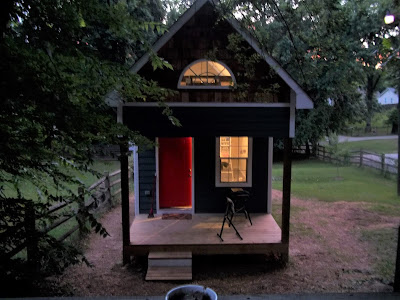 I am just meandering thru this entry. I B tired.  LOL

I was also late, I forgot to take a phone, and Sherry was worried since I was so late. Sherry and Grandson Luke had started to look for me and fortunately saw me when we passed and they turned back. At least I am glad of that.  I am still in the dog house. No tucking in tonight. ;-(. 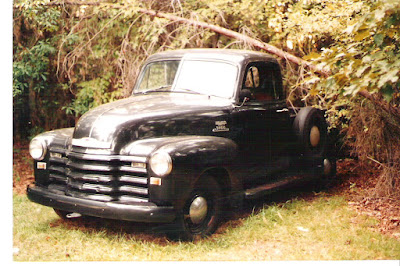 I missed this old truck today. This was a work horse. I can't remember but I think it was a '50 Chevy.
A small tree fell on it  when a hurricane visited. Of course it did not hurt it.
What I really missed today was a phone, but that is too late. (OUCH)
Posted by jack69 at 11:13 PM

love the tiny house. how sweet it is. i'm sure the tuck-in will happen tomorrow as it usually does. time and distance just got away from you tonight. glad you were safe.

I can see why Sherry would be concerned. I'm sure you won't forget the cell phone again :)

Ohhhhh A Tiny House! I would love one of those (2nd to a mini camper though). The railing looks good. Yall did a great job. But as far as you getting home late and not having your phone, I stand with Sherry! You maybe could have phoned her from someone elses phone.
Aint love sweet.
Lisa

I like the looks of that tiny house. What a clever idea for adding additional space to a home. I've seen lots of garden sheds turned in to a place for kids to play, but this is an advancement on that idea for sure. No wonder you are tired. Yes, don't forget to carry that phone and use it too ! Those that care gotta know what's going on.

My pencil crock is full also with old pencils with hard erasers and empty pens. Your nod to pencils has prompted me to clean things up again. As for that tiny house, the big craze now, it's sweet!!! Bill has forgotten his phone so many times that he eventually gave up carrying it. There are too many times I don't know where he is but that's when I turn him over to the Lord to watch. I do wish he'd remember it tho. I'm sure you won't forget yours again at least for awhile. Great job on the projects. I can't believe the building inspector still hasn't shown. Maybe tomorrow.
love n' hugs from up north where we're putting up fence around the 1/2 acre pumpkin patch. It's a two man job usually, but this time it's a one woman/one man job. My brothers are still making hay. Have a joyful week.

You and Tom ... two of a kind with your silly pens!
He honestly looked surprised the other day when I asked, "Why in the **** do you keep all these around that don't even write?" I laughed out loud when I read what you said about giving them a second chance.

The way you and Sherry adore one another, I'm pretty sure she won't stay cross long. Would be a sad world if we didn't have those to worry about us.