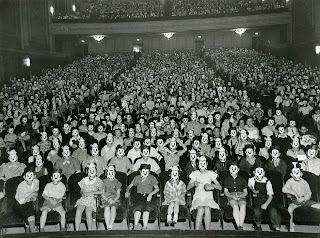 Today was interesting. I did finish the porch. Tomorrow I will have a photo of the finished product. But today Mark had some work of his own to do and I piddled around, fixed a blower for him and some other stuff. I heard some plans about going to see a rocket launch but thought nothing much of it. But soon Sherry said are you ready? I wasn’t so I hurried to get ready.

On the way to New Smyrna Beach (just below Daytona), the launch happened. Mark was driving and pulled into a shopping center and we could see the rocket as it rose.  All you could see was a Bright RED Fire. 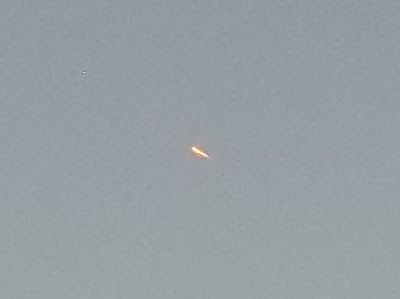 This is sort of a perspective the rocket up in the upper left hand corner its former trail down in the lower right. (Below) 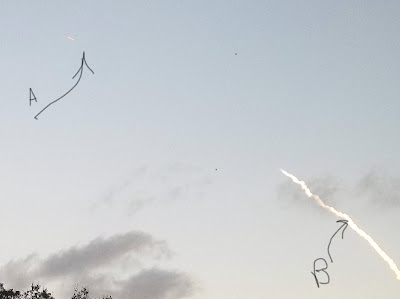 We watched until it was out of sight, then headed on to the beach. 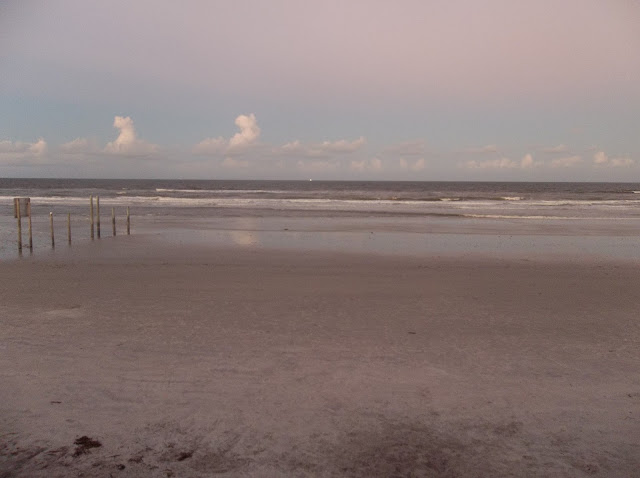 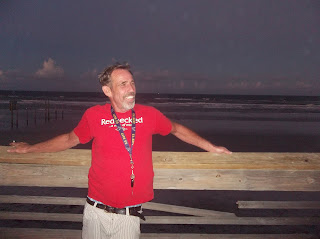 (our driver for the evening son Mark)
Mark took our picture (That is the closest I have been to
that sweetie in DAYS! (Felt good)) 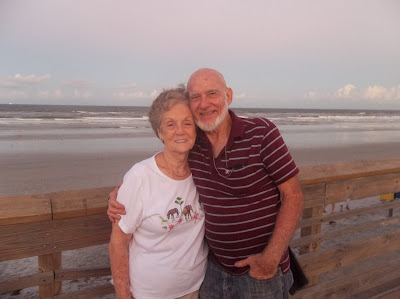 We walked a mile or so on the beach and headed back. Someone saw a sign and suggested ‘ICE CREAM’. 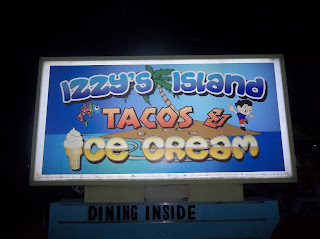 MARK had banana budding ice cream, sherry and I had twirled soft serve. We enjoyed it by a fire. 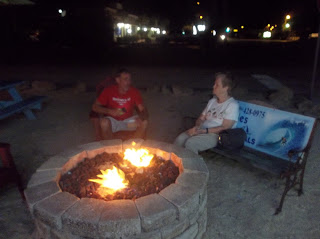 
PS: My piddling around caused us to not be on the beach for the lift off from the cape. 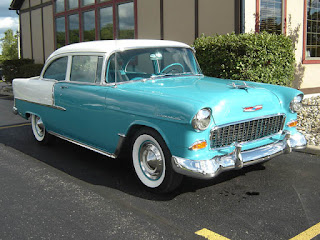 This car pops up a lot. This shot was sent to me by 'Salemslot'. The first car I ever drove on Daytona Beach was a 'fordor' twin sister of the above. I was 16 years old and drove it WWWAAAAYYY to fast on the empty beach at 2 AM. It was my BIL's car.
Posted by jack69 at 10:34 PM

It did sound like a nice day; a little of everything, some work, some adventure with seeing the rocket launch, a walk on a beach, and ice cream. Doesn't get much better than that!

What a nice day you had! Great photo of you two love birds. Sherry is a cutie.
I love stopping for icecream and its usually after a walk on the beach.
We saw the rocket launch on tv. I asked Nick if he would go up in a rocket. His reply, “Heck No!”
Boy I would though!

Sounds like a wonderful day for sure ! Thanks for the pictures of the beach. My favorite place and one I rarely get to.

Did you get in trouble for being late for the liftoff?
I love the beach - it didn't look crowded either.
Nice trip.

Sounds like you had a fun day. Jim has watch lots of rockets go up and would say "I wonder if some of our material is in this rocket". One year a tile fell off one of the rockets and he remarks "Hope it is not one of my Company's. Remember Jim was into lots of things..love life.

Nice Picture of you and your Bride, not much going on, watching the leaves fall and waiting for it to cool down, was glad you got to see the launch. take care and behave ! Gary

It will be firepit weather here this weekend. We're excited. I'd love to see a launch. That's coolus and groovy as I would have said in the 1970s :)
R

One of these days I'm a gonna catch up with your posts, Jack! :)
Witnessing launches is something I really miss about living in Florida. Crazy. On more than one occasion I remember taking my eyes off the road during 'rush hour' to gaze left (east) at the fire in the sky. So cool, how we on the west coast (Florida) could watch the space shuttles ascend.

it's nice to see a rocket launch. yummy ice cream on the beach too.

Sounds like another perfect day~never have seen a rocket launch except on tv.
love n' hugs from up north where Colleen and I took a road trip today......time to hit the hay. Phew, plum tuckered out but a beautiful color tour along the St. Croix River