Uninvited guests, some sweet some not! 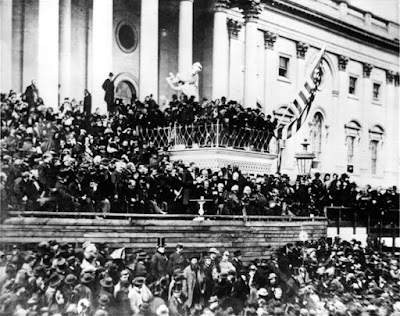 Lincoln's second inaugural address. Booth can be found near the front in the photo they say.

Today, not yesteryear.....
Today I used the printer. The print was very light so since this paper was my 1099 R I needed it dark. No problem. Under the couch I have a container that is seldom used so it is at the side, not in the drawer. When I pulled it out, it was empty.
At one time I refilled my own cartridges, I stopped when the cartridges got too smart for me, but I did not destroy the ink. I continued to use the little container but put my new print cartridges in it. Everything was gone. I looked closer and noticed the carpet under the couch was stained with ink. OUCH.
I looked still further and had blue, green, red ink in the carpet. I found the containers, they were eaten through I mean big hunks eaten out, but the little jugs were empty. I found my new cartridges they were eaten into also. All I had to say is, I hope the ink was the last thing that mouse/rat drank and if it is dead, I hope it is somewhere down in Florida.
But we had another visitor. I will back up. Probably a little after the havoc under the couch that we did not know about.
Just after crossing this beautiful bridge you see in the distance east of J’ville Florida. 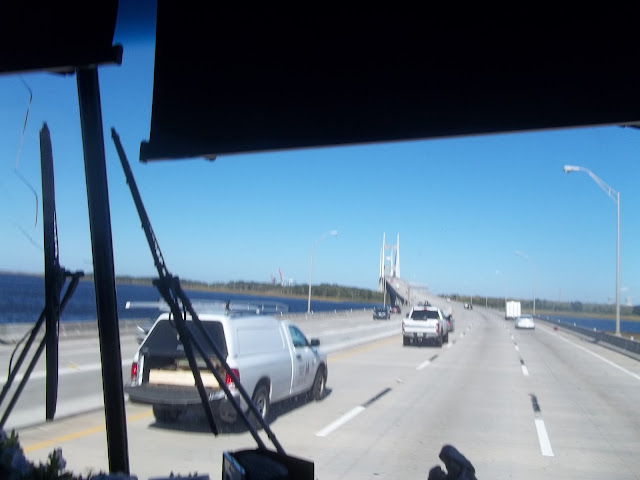 Another visitor appeared. I smiled. On my dash was this cute ‘tree frog’. He had just jumped from my Captain’s hat to the dash! I asked him how he got in the motor home. He said, “I followed the mouse in.” At the time I didn’t know we had had a mouse. I told the frog he was welcome but if he saw the mouse again to tell him he was not welcome. 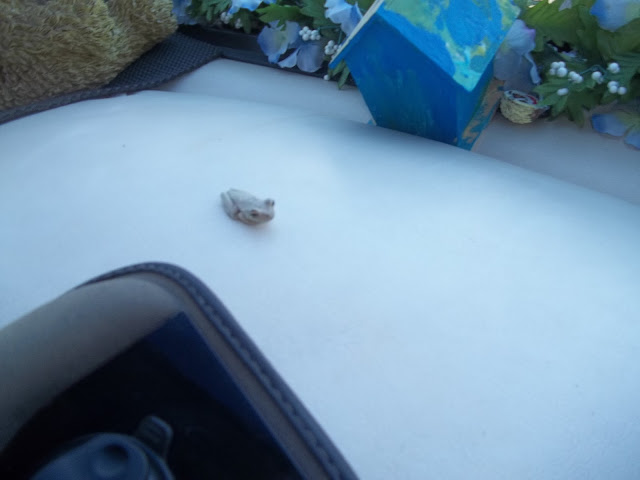 I talked to him a minute. Sherry took this picture then he jumped to her side of the dash. As she looked at the little dude he jumped about five feet, just past her and disappeared. He may or may not still be here but I wish he would have stuck around. 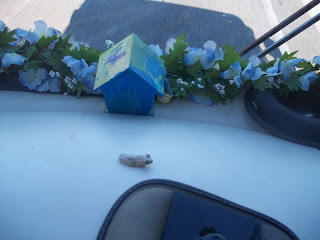 But ain’t the little guy cute this is his best side. LOL! 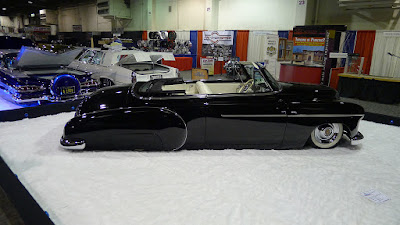 You are going to have to start charging rent for the critters who are wanting to call your and Sherry's motor home their home :)

Mice can do a lot of damage and make a terrible mess. One of my son's installed the last ink cartridge in my printer and I noticed some ink on the floor afterwards. Amazing baby wipes cleaned it all up. I don't know what happened that it leaked but will take precautions next time they are changed. Hope your future guests are only the nice kind!

LOL-ing about Betty's remark.
Knock on wood, I've not seen a mouse since we moved here in '04. But come to think of it, no reptiles either. That wee frog is adorable!!!

I told myself just yesterday, "If he ever mentions the hat I'm gonna ask", so here goes..."Whats the story behind your captain hat?" It's what makes you! I like it. There must be a story to go with it. Lets hear it.

Keep a lookout for a rainbow mouse and nude frog.
Lisa

OH and that naked frog is posed like that Chevy
Lisa

That was an interesting photo with Lincoln. I couldn't tell where Booth was though.

You had mice - I bet they had a tummy ache eating the ink - I hope they crawled out before they died! lol

I laughed to hear your dilemma with the ink, and laughed harder to imagine a multicolored mouse running around the coach. As for the tree frog, he is pretty cute. Hope he finds his way outside again., unless you prefer a new pet. I liked the 'sometimes you get and sometimes you get got.' um, did you get got? with your unwelcome visitor?
love n' hugs from up north where Christmas Eve day preparations are in full swing. Have a very merry Christmas if I don't get back on here.

I don't know about the mouse, but the tree frog was cute.