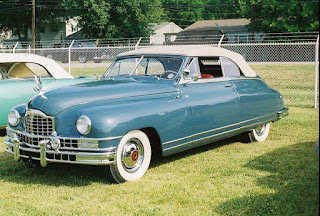 1948 Packard convertible. Strange the Packard for years matched the Cadillac and Lincoln as the elite. Even at times surpassed them.

Now tonight:
Most of our family is in the North Carolina area.  We do get together as often as possible. WE have a grandson in Utah and one in Oregon.  I try to keep in contact with the ones on the west by letter once a month. I dread to think that our around the USA trips are coming to a halt. I really want one more trip out that way, even my girl is sorta onboard for next year.

Of course we sightsee on the way. On our walk tonight we ran into Nephew Jerry and wife Debbie. They are also walkers.  They were still excited about a trip to Jackson Hole and Yellowstone they took a couple years ago.  We had a lot in common to talk about and it was such a joy to see the excitement of travels and walks they have taken in Montana plus others.  We did not delay them long but it was such fun just to chat.

Jerry is the oldest son of Lefty, Sherry’s oldest brother. I always admired Lefty.  As a Marine, he was wounded on Iwo Jima in WWII during the landing there. He never talked much about it.  Returning service men after WWII have many tales other than the war. Lefty bought a monkey passing thru some island at the end of the war. He actually got it off the ship with him and brought it home.

That was the talk of the family. The monkey liked Lefty and family but Sherry declared the monkey hated her. And was mean.  LOL  She said Lefty sold it to one of my cousins who dealt in animals over in Lowell, many years before Sherry and I met.  I never heard of it.

Lefty once had a roach coach business.  When he was ready to do something else we bought it from him. We ran the business for a few years.  Oh yes,  Once when I thought I was ready to settle down and go to college Lefty sold us a house for $3000.  We lived there until I changed my mind about college after a couple semesters (surprise), and joined the USN.

I have a lot to thank Lefty for, most of all his dedication and service to this country.  In the last several years we have bought a house on the same street Lefty and family lived on for the last part of his life.   I never passed that house without thinking or saying, “That is the house Lefty built. And raised a wonderful family.”  Lefty’s family is one of the few in our family  that DOES NOT have the traditional ‘Black Sheep’.  Cadoos to the grown kids: Butch, Ann, Becky and Jerry.  A family for the books.

Sorry.. All that from a coincidental meeting on a walk.

Ps: SMILE…
DJ (age 4) stepped onto the bathroom scale and asked: 'How much do I cost?'

Black Sheeps in families can be okay, especially if they end up as prodigals. Lefty does sound like a good guy and friend. Glad you ran into them during your walk.

Never met a family member walking where we live - but it is different here and I don't have that many relatives! lol

Nice memories and you were very complimentary about his family.

Nice visit you had with Jerry and Debbie. Our family and friend run-ins are usually in the grocery store or each others homes........as for They Say, Mom's doc and she have always said, Honey works for everything...........
love n' hugs from up north where we're in for a week of rain

I'm guessing y'all don't have mosquitos in North Carolina? Were it not for the dogs needing to 'go' I'd be inclined to stay INSIDE!
'Had to smile about Lefty's monkey, because one of my favorite pix of my dad, he's holding his monkey aboard ship. What's with monkeys and the U.S. Navy?

Thanks for taking us along on another (virtual) stroll!