from an old computer 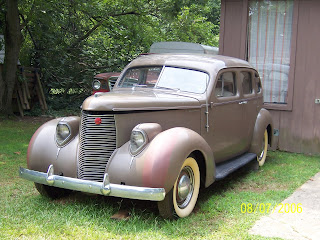 1938 Studebaker President it was a part of Jim & Shirl's collection

This is an old computer. I am finding stuff I wrote about 8 yrs ago:

Quote:
I have a Pollyanna picture of married life; I think it should be forever. I am not sure how many animals and fowls mate for life, but Tucker tells me that Canadian Geese do. Not all animals do and now it has reached the point where near half human marriages in the USA do not last.
I do know that it takes a lot of give and take. I know a marriage is not 50/50 all the time. Sometimes it is 10/90. There are times one partner, for the sake of the marriage, says I am sorry when in their eyes they have done nothing wrong. If it is a good match there will be a reversal of that and it, 90/10.  Hopefully if you stay married long enough it will even out. It is the wise, or cool head that says, “I am Sorry”.
Sherry and I have been married 54+ years, I will admit she has given more than I.  In the past few years I have tried to make a conscience effort to make some of that up to her.
I feel sorry for someone who is miserable in a marriage. I have enough common sense to know there are some folk who are HARD to live with.  There are people who should never get married, they are too self centered or just do not know how to share.
There are some who are IMPOSSIBLE to live with. It is a pity that sometimes children come before the realization, that this was all a mistake. Especially, if the divorce is nasty and mom and dad are calling each other names.

Strange I should run across this on our 62nd anniversary.  I have said it here many times. My girl is a dream. She has put stability into a fly by the seat of my pants sorta guy.  I have been sorta successful at the many things I have tried, but I have to admit she handled changes like a champ.  Like the time in ’58 I had been on the job at the Charlotte Observer two weeks and I came home to tell her I just joined the USAF, we leave in a week.”
All she asked was, “Where to this time?”
“Biloxi Mississippi, you will love it!”
“Okay, I’ll start packing.”

No surprises today, it has been lovely. Her favorite restaurant is the Red Lobster, so there we ate early today. 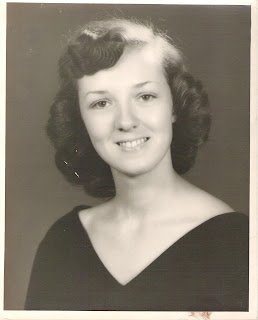 My girl a few months before I trapped her!

Oh well, thanks for stopping by the old people’s house.

Nite Shipslog
PS:
The Coach sits in Atlanta, more news Monday.  Computer geek called to say he could not get into the computer. Will take it back to factory settings. He can save no aps  nor data.  That is sorta good to know, I GUESS!
Posted by jack69 at 9:29 PM

Last night I meant to say we are STARTING on our 63rd year. To clarify my mistake, this is our 62nd anniversary! So if you were sending Sherry condolences it has ONLY been 62 years. LOL

Happy Anniversary To you and Sherry!!

a shame you won't be able to save the data in the computer. but at least it'll be useable. marriage is indeed all about give and take. happy anniversary.

Happy Anniversary Jack and Sherry! I liked what you wrote, Jack, those years ago. So true about marriage. It is sad when two people who love each other so much end up hating each other; not good if they are still raising children together. Marriage is hard work, but worth it in the long run :)

someone very close to me
got married this past Friday

I'm not sending out any condolences for sure. I'm sending out love and congrats to my favorite couple. Glad to see my favorite place to celebrate is also yours. Red Lobster is always my choice when I have one. I'm not so sure it was a coincidence that those words of yours from years past happened to come up on the computer for you today. Loving is caring and sharing and I think the two of you are very good at that !

Happy Anniversary to a sweet couple that sets a great example of love and marriage. Im on my 2nd and last marriage. My first marriage was an abusive marriage and happend after I said I DO. It lasted 6 months. I am now married for life. I Love my man and he no doubt loves me. I think marrages sould be 100/100.
I wish you and Sherry many more anniversaries! Love and kisses keep your motor running.

Such wise counsel from someone so young. (*smile*)
Ya. Once upon a time I was one of those 'self-centered, hard to live with' girls … who had no business being married. I'm SO thankful the two of you are the Real Thing … and serve as a Great Example to others.

That's a great picture of mom. In all actuality the divorce rate statistics are skewed because of the number of times some individuals marry. Elizabeth Taylor and Mickey Rooney each skewed the stats wildly.

13 divorces between the two of them.