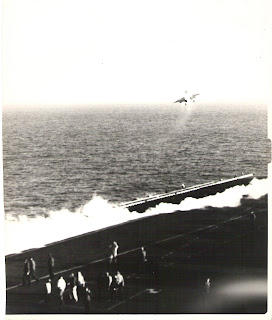 Launch of an A-4 from the waist catapult off the USS Independence CVA62. I slept right under this Cat. 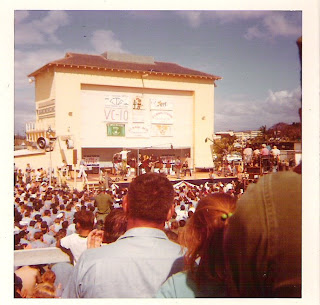 The Bob Hope Show at Guantanamo Bay. Featured Charlie Pride, and Alan Shephard the only person to golf on the moon.
Today's entry................

My internet friend Chuck, was in an assisted care facility. He was a veteran who had lost a leg in France after ‘D’ day. His blog said: “I am in an assisted living facility, translate that Old Folks home.” His Blog was “Dribbles by Chuck”. I did not read Chuck every day, but when I did I learned something. He passed away and his daughter was nice enough to add the last entry to his AOL Blog. Entitled:
“Chuck Ferris has left the building”.

That was so thoughtful of her because Chuck had a large following. (Jun was nice enough to tell me, I had missed it.)

Reading his Blog I got a new view of ‘Old Folks Home’. Chuck was happy. Seldom did his folks visit, but he handled it admirably. He had lived his life, now was making the best of the last of it. I miss “Chuck”.
Chuck would say: REMEMBER PEARL HARBOR! (Dec 7th)

I think the only thing I can say is I hope I have a good outlook on life after I or my kids put me somewhere. I would rather die in my sleep, but we do not always get our druthers.
Ray Campbell. Successful preacher, story teller and chalk artist. Ray got old. I visited him in the Stanley Total Living Center, Stanley NC. IT is an old folks home, but not like I remembered. It did not smell of urine, and it was clean. Ray, my mentor, did not know me, As he so succinctly put it, ‘I’ll kick your ass!”

I countered, “This is Jack, you wouldn’t do that would you?”

His answer was, “You bet your ass I will.”

Before Ray was a preacher he was a prize fighter. His mind had reverted back. But As a kid I remember him saying, ‘you think jumping rope is sissy, let’s see you do this’. He would do that boxer stuff three times under your feet cross his arms and all that stuff. It fascinated us boys.

He would take a cigarette and keep it in the air bouncing it with his fists. Then he would let it drop to the ground and stomp it, and say, “I know grown men who will let that little thing beat them, we won’t let that happen will we?”

We all said, “no”, but most of us got hooked on cigarettes, but I never forgot his illustration. I was a long time whipping it, but RAY,” I did it.”

He died there and I do not feel bad at his family for placing him there. He got so he could not take care of himself. But he was strong and in shape at 80, he could have hurt someone and not meant to. Stanley Total Living Center is a nice clean place.

Q: What causes the tides in the oceans?

A: The tides are a fight between the Earth and the Moon. All water tends to flow towards the moon, because there is no water on the moon, and nature hates a vacuum. I forget where the sun joins in this fight.

Q: What are steroids?

A: Things for keeping carpets still on the stairs.

Q: What happens to your body as you age?

A: When you get old, so do your bowels and you get intercontinental.

Q: What happens to a boy when he reaches puberty?

A: He says good-bye to his boyhood and looks forward to his adultery.
Posted by jack69 at 11:11 AM

Really, Really great entry! Thank You, for reminding us about Pearl Harbor Day.

We were reminded about Pearl Harbor day at church today. I read Chuck's journal from time to time and had much admiration for him. We have a new nursing home here that is such a nice place and they do so much for the people who are able. I'm sure it cost an arm and a leg to live there.

The three assisted living homes we entertain are very nice. They seem to care for the people. I remember Ray Campbell very well and he was a character but enjoyed life. I don't think I knew he was a boxer. I don't like to
think about getting older. Can't we just all
stay here and pay someone to take of us.

Just wanted to say, You and Miss Sherry have a great time on your trip. Just don't get to close to the edge of the boat.

Nobody realizes what a hard thing it
is to allow your parents to go to a home
that isn't yours. It is an agonizing
decision and the heartache continues all
the time they are there. We had Daddy home
with caregivers until we could not longer
do it safely,(falls and lifting continued
even after he was in the nursing home,
however.) One has to go through it to
realize the stress. A serious subject
with so many aged now.
I love your chilren's quotes. Ah, to be
young!

I think its good that your friend was at a place that was safe and clean for him; you always hear horror stories about places not quite up to par; you know I prayed that my mom would have a peaceful death and the Lord answered that prayer and at 85 years old, she was one of her only family of 10 kids that did not go into a home or assisted living; so who knows, if you pray to die in your sleep (which is what I think would be neat, fall asleep here, wake up in heaven); maybe the Lord will answer that prayer :)

enjoy the week ahead

Sherry is BEAUTIFUL ! i have always thought so. This picture shows her off real good. She looks so active and healthy it just puts me to shame. lol fat and fluffy jun

The oldr I get, the older I feel and if aNYONE SAYS DIFFERENT i WOULD LIKE TO KNOW THEIR SECRET.
Lucy