Cruise on the "Monarch of the Sea" 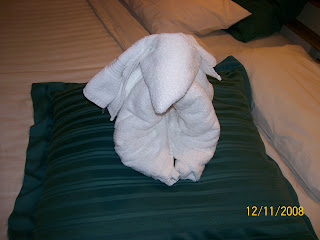 This is our 'towel' lamb. 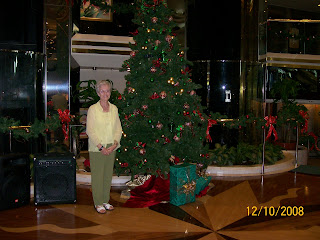 This is my Christmas Present. 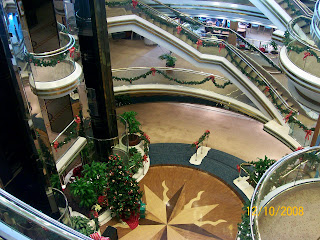 This is looking seven decks down to a small dance floor. 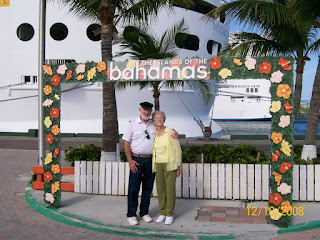 We walked an hour or so in Nassau then headed back to the ship. A lady was nice enough to take our picture. Sherry then took a picture of her and her mother.


Okay, Cruise Report. I just confirmed my contention. If I could have had my girl aboard ship, I would still be in the US Navy. WE had a great time.
This stuff is old hat to your guys who have been on cruises, but new to us. To start with the cruise was reasonable. I believe it was $278 per person for a four day cruise. The check-in is sort of like boarding a plane. The security checks etc. We carried our luggage aboard, not knowing anything about luggage check it. It was not bad. There was a buffet on the 11th deck until the rooms were ready.
We heard complaints about how small the staterooms were. Shucks we had no complaint there, the stateroom was bigger than our bedroom. Also the bathroom was big enough to turn around in. We were satisfied with that. I saw sailors polishing brass, made me feel good, I like that. We rode the elevators some but we did a lot of climbing the ladders (stairs). We slept on the 2nd deck and ate most our meals on the 11th. So we climbed some. We did a lot of walking on the prominade and eleventh decks.
The entertainment was good. Comedians, impressionists, singers, dancers etc. I enjoyed it but understood very little that was said, of course. I loved the impression of Jerry Lee Lewis, Fats Domino, Little Richard, Liberace & They must have a piano tuner aboard because he beat that thing to death, but he was good.Frank Sinatra.
To be honest one of the most interesting entertainment features was towel folding. You that have been aboard understand that. They can fold a variety of animals and dolls. We had a lamb on our bed the last day. The rabbit was cute also.

I was amazed at the beauty of the ship. WE were on the ‘Monarch of the Seas’. Oh also a first for me, I sailed under the first lady captain of a ship that size.
Our first port was Coco Cay. Sherry and I had just got ashore. We located a secluded rope hammock. We had just figured how to get into the thing and Sherry was going to show me some tricks, when she was embarrassed by a native sticking his head thru the Palmettos, he grinned, smiling like he knew the trick. Then he said the Captain wanted us back aboard because the ship had slipped her anchor, and we had to sail. (Doggonnit maybe one day she will show me the trick.)
Thanks for coming this way.
Nite Shipslog
PS:

Read through these children's science exam answers …… :)
Q: What is the fibula?
A: A small lie.

Q: Give the meaning of the term 'Caesarean Section. '
A: The Caesarean Section is a district in Rome
Q. What does the word 'benign' mean?'
A: Benign is what you will be after you be eight.
Posted by jack69 at 7:11 PM

Glad you are back. I see you didn't need the money to get you out of jail. I never got the
money you mailed me. If you can get a taxi into
town I will send money for gas it is cheap now.
I will get the real report form Dr. T. about
your behavior. I bet you were called Captain
lots. Now stay ashore for awhile.

Welcome back captain jack and your fair Lady! Shirl I dubbed him that from the very first time I saw a picture of him in his spiffy hat he likes to wear. lol
I have never been on a cruise either. You made it sounds so nice I might try it one day despite my fear of sea sickness.
I think I would like to go on a cruise with other single oldies but goodies and maybe find a nice man to swing in a hammock with one day. Naw , i better leave well enough alone, pun intended! jun

Welcome back Jack and Sherry. I'm so glad you talked your way out of jail, I had my fears that Shirl wouldn't send the money...:) Thanks for coming by the blog and for the nice comments.
A 'towel lamb'? I thought you had caught some kind of seafaring creature...ha. take care, Sheila

Will you be folding towels in your spare time now? So happy you two had a nice time and the pictures are great. I've never been on a cruise but my sister and her husband went on one paid for by their kids, All ten of them. Their luggage with their dress clothes was lost so they didn't have them for the formal night but they let them in anyway.

So good to have you back. Have never been on a cruise What impreses me is the happiness you and Sherry share with each other. It sounded like fun. To bad that native stuck his head in. Sherry is just going to have to show you that trick at home. Thanks for visiting my blog and no 2 cigarets a day is not bad. Believe this when I say I do want him around a long time. Luc

Glad that you two had a nice trip and arrived safely back home. No I have never been on a cruise but have always want to go on one. LOL on the hammock trick. Helen

lets try this again! my computer does not won't to work this morning. Glad you are back and it looks as if you and miss sherry had a great time.

Welcome back glad you two had a great time. I haven't been on a cruise I have been deep sea fishing a few times. I would enjoy the cruise more, maybe some day. Take care, jean

Welcome back! Sounds like you and Sherry really enjoyed yourselves. Shirl must have sent you a get out of jail free card. I love the pictures and the one of you and Sherry in the hammock on your sidebar well that's just priceless. I see another entry gonna head that way and read it.
Debbie

Love the pictures...now I wanna go on a cruise..the price wasn't bad at all...wonder if that is a discount for this time of year?

Are there cruises to the Hawaiian Islands? I am so dumbfounded when it comes to travel..cause I haven't been too many places...lol

I was just scrolling down my dashboard and saw your picture, and boy oh boy does that ever look mischievious. Poor Shirl Lucy

you both look like you had a great time! so neat it was an enjoyable adventure for your first cruise :)

You are so lucky to have someone to cruise with! I still am looking for someone to go on a cruise with. My husband and I had planned a cruise for our 25th ann but he had heart bypass surgery instead. My girl friends want me to go with them to either Alaska or the Greek Isles and I think a short cruise for me would be best first. Lindie