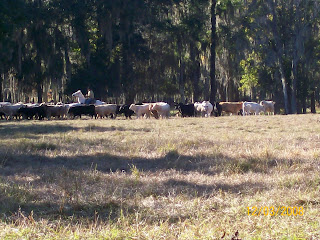 I had no luck, getting a picture of the dogs, they were very fast. 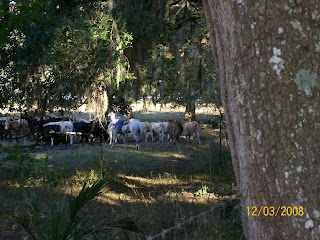 He brought the cows into this little hammock, He and the dogs were able to round them up and start them all in one direction. 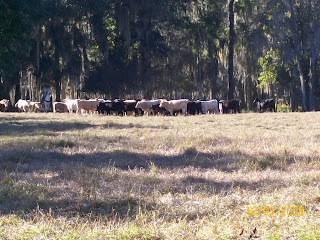 Most fields here are green, this shows up more brown. Coming back from out West Sherry would talk to the cows here in the East. You guys just don't know how lucky you are with all this green grass, your cousins out west have to hunt for everything they eat. HA!

I had over looked one aspect of President Elect Obama’s campaign promises. I liked the idea of normalizing relations with Cuba. For years I have been upset at our policy of acting like they did not exist, while playing up to other peoples of the world who were actually anti American. So I am FOR normalization of relations with CUBER (JFK pronunciation).
If he normalizes relations, he will have done something every president since JFK should have done. If you are concerned about someone, you can observe them as a friend much easier than as an enemy.


NOW to important stuff! I knew I should have kept my mouth shut about that heifer I had my eye on. Somebody OUT THERE, told the cowboy on the ranch next door. Yesterdeay as we were walking, He was on his white horse with his three cowdogs driving the heard to the far side of the ranch. It was no fun seeing supper being run off by the three dogs. Oh well, maybe they kept me from being hanged. Everybody including the Cowgirl, Paula, warned me.

This Florida Cowboy, sometimes called a Cracker, did not use his whip today. The dogs were very efficient, with the help of the cow pony. It was interesting. Western Cowboys carry lariats or ropes (according to what I have read) to haze cows in the dorection they want them to go. The Florida Cowboy uses a whip. The whip does not touch the cow as a rule. Just the sound of the ‘Crack’ keeps the unruly critters in line.
Anyway thanks to SOMEONE I will have tomato soup again. LOL
Nite Shipslog

PS: (I think these came from Shirl, I USED them once, but bear repeating))
Summary of Life

GREAT TRUTHS THAT LITTLE CHILDREN HAVE LEARNED:
1. No matter how hard you try, you can't baptize cats.

2) When your Mom is mad at your Dad, don't let her brush your hair.
3) If your sister hits you, don't hit her back. They always catch the second person. (VERY TRUE STATEMENT, PERSONAL EXP.)
4) Never ask your 3-year old brother to hold a tomato.
5) You can't trust dogs to watch your food.
6) Don't sneeze when someone is cutting your hair.
7) Never hold a Dust-Buster and a cat at the same time.

9) Don't wear polka-dot underwear under white shorts.
(This happened to me in the fifth grade, mama made the pantalooms I wore as the trumpeteer for May Day. (Except The underwear was striped))
Posted by jack69 at 11:10 AM

Jack I hear tomatoes are very good for men. you gotta protect that prostrate!
somebody did you a favor chasing off all them cholesteral filled artery clogging cows.
now barbecue, thats another story.it s supposed to be bad for the blood pressure but it is so worth it in yumminess.
take care now and stay away from the cows if you know what's good for you!

Jack I forgot about May Day I was a purple egg
my dress was made out of purple crepe paper.
I have never seen Cowboys round up their cattle.
It must be an interesting sight.I have seen the
ducks round up their little ducklings and get
them acoss the road. The traffic will stop and
wait until they are all on the other side.
They also stop the traffic in parking lots.
Glad the cows got away. (Remember Cholesterol)

No it wasn't me who turned you in but I bet John would. Like the pictures.

so was it a corgi that you couldn't get a picture of since it was so fast with the cows??

You need to stay away from stray cows and not be wearing striped underwear under white shorts LOL. Get yourself into trouble every time. Great pictures on the side of your blog. Helen

I had chili tonight with a good ol peanut butter sandwich and crackers...