Folks you have to be there to understand the enormous task of recovery after a hurricane or major disaster. We went to the Katrina area pretty soon after the disaster, yes it was organized  and unorganized chaos.

Now, the e-mails ‘leaking’ out of FEMA itself show they were not prepared for the disaster, this time any more than before, mainly because Sandy hit densely populated areas they say. FEMA officials on sight told FEMA personnel them selves, to ‘sight see’ and do not go into the worst damaged areas. for 4-5 days.

We are very giving people in the USA. As soon as a disaster hits Organizations, individuals, churches and  charity groups of all kinds start giving and sending ‘stuff’ food, clothing and supplies. Unless you are there to see the results, you cannot understand. Picture a Truck arriving in a neighborhood with cloths. People are anxious to replace what they are wearing. But if you are size 8 and cannot find anything but size 5 or 15, things get tough. The volunteers have no time to set up tables so they start passing stuff out, many times by the box. If the guy in front cannot use it it goes over his head to the next guy etc. When it gets to the end and no one can use it, it stays on the ground. 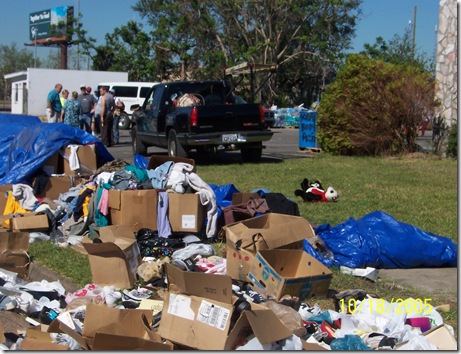 When the truck leaves, there are piles of new clothes and shoes scattered all over. Most of the time no one picks it up to refold it and besides by now it has at least one or two foot prints pressing it into the mud. The first pile I saw, I honestly thought, how ungrateful! until I took time to think. We saw many piles the same.

NOW COMES THE NEWS MEDIA, filming the pile and discoursing how there must be a better way, bad mouthing all the assistance as being unorganized. My LORD, of course it is unorganized, it’s a disaster. It takes time for things to get organized in the disaster area. 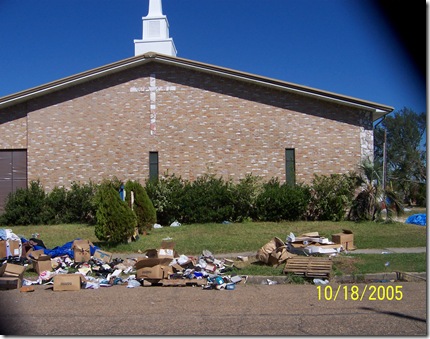 (Things donated,  we did try to repackage some of this!))

Things work well on paper, but in reality you cannot predict human nature. I mentioned only one small problem, the clothes. We saw a truck load of frozen bread, someone had donated, a great gesture, but no one had gas or electric, and some no houses to cook it in. so most of it was lost. I wish the media could understand, you cannot organize chaos in three or four days. Like Bush or hate Bush, his administration done as well as the present administration. The FEMA officials admitted in their own correspondence, they were not prepared for Sandy. 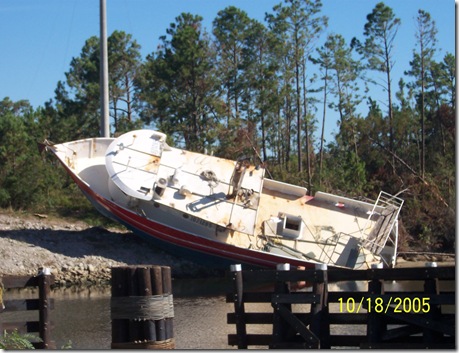 (Back Bay in Biloxi)

All I am saying is like most situations, you must be there to understand it.

Natural disasters are terrible to deal with.

It is hard to give a guy a break when you just do not like him. 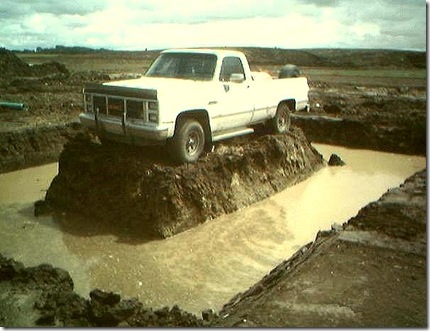 Disaster, don’t make your girl mad, if she owns a back hoe! 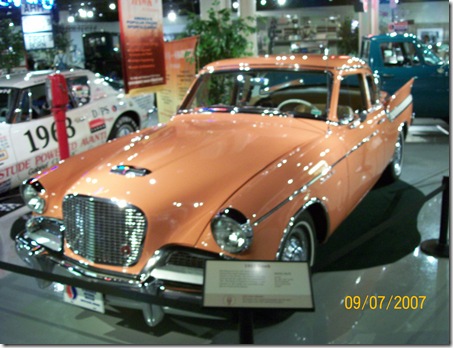 From the Studebaker museum in South Bend, IND

I totally agree with you, Jack, that we need to be there in situations to really grasp the magnitude of it. I guess for me the "funny" thing about FEMA and Sandy is that our president was front page and all over the news promising help and that things would not be forgotten yet a good 6 weeks later, another person I know online who was in Pennsylvania and experienced damage is still trying to deal with cleaning out the massive debris left. Makes you wonder what if anything FEMA is doing to help those that need help. I do agree though that we are generous people in trying to contribute to help others in their tough times when natural disasters like this strike.

You KNOW that «Louis» loves those Studebakers...
but your photo shows one reason Studebaker closed. When they introduced the Lark - they quit offering the Hawk as a hardtop. They sold it as a pillared coupe only - right at the height of the hardtop craze - and the Hawk looked far better as a hardtop than as a coupe. They could have sold thousands more of the hardtops but they once again showed their talent for building the wrong car at the wrong time...

It's sad when we see that kind of stuff. So many needing help and the waste of donations at the same time. Anytime a disaster happens it is chaos. It' takes a long time to recover too. They always say we should be prepared but how do you prepare for the unknown. Hope all is well there with you all. I'm off to do some Christmas shopping today.

Jack is this the tornado that hit Florida yesterday? I think it looks devastating, but probably so much worse in person. Prayers to those people. sandie

Been there...done that...!
As much as you'd like to send supplies...sometimes it better to conate to an "established" charity..I know i appreciated the food card to replace the contents of my refrig....after Frances...
ps.....Max & Mia forgave me this AM after several cookies..
Up here in the clouds....Linda

Thank you for the insight into this tragedy. I had never thought of how the clothes that were donated might be passed from one to another and then end up in a pile on the ground. It is understandable that during a chaotic time like this, things happen that normally wouldn't.
Regarding the media, don't get me started on them. In my opinion, they have divided this country. I don't trust the media much any more at all....especially the "mainstream" media.
Thank you, again, for your insight into what is a tragic situation.
As a people, we can take care of our families and each other, and given the chance, we usually do.
Smiles and hugs,
Jackie

I like to donate to help people in time of need. I would think maybe a gift card to hand out might be a good idea, but wonder if they ever got it. It’s so sad to see so much going to waste. Take care. Jean

I have never been in a situation
like that but I do understand
how people give things and most
of them as we can see end up on
the ground. It is pitiful but that
is what happens...

It is so sad to see just how good intentions go awry. It's discouraging when donated items go unused and later trashed. Our country although generous, is so unorganized from the top seat on down. Stay focused on our Lord - the one constant in our lives!
'love & hugs from afar'