This is a touchy subject

When will you Die. I heard a man once when he was upset at not finding the proper papers, Insurance and deeds, etc.after his father’s death,  say, “Dad thought he was going to live forever.”

That got me to thinking, in a way we all think we will live forever. Think of it. I doubt if anyone reading this seriously thinks they will die today. Maybe next year, next month, next week or even ‘I could die tomorrow’.  We always think of the term tomorrow, but as I have said on here, ‘Tomorrow never comes.’ So effectively we think we are gonna live forever.

Now with that out of the way, The above thinking is when you are up and around, maybe bad health, but still getting around. The thinking above is appropriate, and is what we should think. We should not go around gloomy, thinking I could die today.

I have had a friend and an acquaintance, who chose their time to die.   When I talk about that Sherry doesn’t like it. But She and I do have a living will, we do not want to be kept alive by artificial means. WE know that there could come a time when we will not be able to make a decision and we do not want our sons to have to make the decision to remove the machines.

At deaths I have heard of terrible accusations by siblings, ‘YOU KILLED MY DAD!’ there is enough pain for someone must make the decision, without bearing the brunt of someone’s anger.

The times I am talking about is when YOU or I know, we are about to be a burden, a vegetative state. Would you  end your own life?

A nice guy, a man I met only once. A successful business man, learned he had inoperable cancer, no chance of  real success by any treatment. He put his house in order. Everything taken care of, then took his own life. He had seen cancer up close and now he was seeing it personal.

I have no stones to throw. His wife was devastated. She would have gladly taken care of him, he knew that, but he knew she would suffer either way, he took the way out he thought was best all round.  Not sure I could do that, but I am not positive it is wrong.

I have used the theory that no one is in their right mind when they take their own life, so they are not responsible.

It is proven by a lot of politicians and ministers, you can justify about any position, IF YOU PUT THE RIGHT SPIN ON IT.

Don’t get the wrong idea, I am going to live forever, so I won’t ever have that problem.

I did near one old man say, if he had to die, he wanted to be shot by a jealous young husband……

(For me, it would be Sherry, the jealous husband wouldn’t get the chance. How low can they go 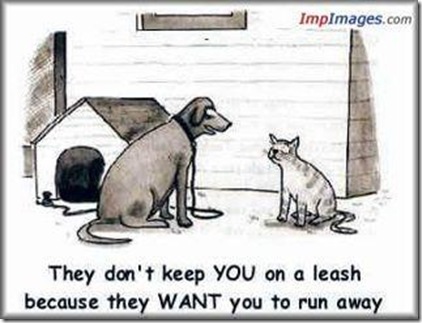 Here's hoping that you live forever, my friend. Life is much nicer with good people like you in this world.
Hugs,
J.

LOL with the dog and cat cartoon! I can't imagine taking my own life, but I don't fault anyone that does either, Jack. I think there are a lot of tormented people out there who think it is a solution to their pain and suffering or in the case of the man you knew, he perhaps thought it was a noble thing to do to save pain and suffering all around in his final days. I know those that are left behind after someone takes their lives are guilt ridden and wonder if they could have done something different to prevent this from happening.

I do think we have to be prepared that we are going to die since like I said before 1/1 of us are going to die in our lifetime. The odds are pretty much against us living forever this side of eternity. In saying that, we need to make preparations for when the inevitable happens. Living wills are great if they are carried out. Hubby's mom had one and hubby's dad, who was her power of attorney because of her dementia, could not honor her wishes not to have her life prolonged because he could not bear to let her go. I think those we put into positions of power of attorney need to be strong enough to make that decision based on our wishes when the time comes.

When hubby's dad was in such a situation where his life would not have quality if prolonged, hubby and brother went through each point of his Living Will and agreed at the end that he would not want to be kept alive so they stopped treatment (which was the advice of the doctors too). In that case since it was a mutual decision between the two of them, there was no accusations afterwards.

It is a touchy subject indeed but it is one that has to be dealt with. Like I might have mentioned too before, my mom prepaid for her funeral years before she died and when she visited me once and gave me the information in case something happened while she was with me, I didn't want to really hear about it because I thought she would live forever, but in her wisdom, she made sure I understood what was to be done just in case something happened. We need to be just as wise ourselves I do believe.

Jack I knew of a man once that took his life and also kill his wife. They were both in their eighties. I’m not sure why he did it, but the word going around was that she carried a gun, and had told her neighbors she was afraid he would kill her. We don’t have a living will, but know that we need to make us one. This was a good read as always. You and Sherry take care. Jean

Death is a certainty for all of us and I think it's a good thing that we don't know in advance just when that will be. It is good to be prepared and save our families a little grief. I always think I must still be living because there is some job left for me to do. The hard part for me is seeing someone younger die. Right now I'm alive and will just try to enjoy the moment for all it's worth. My cup of hot coffee tastes pretty good this morning. Hope you all have a great Monday!

Deep conversations make me nervous but we do have living wills. At least our kids do not have that burden come our going down hill. One thing we are finally attending to that should have been yrs. ago, however, is sorting out the property ends. What a mess.
BlessYourHearts and Merry Christ-mas

I would not kill myself because I feel it is against the Bible. But I do believe sometimes you can for a split minute in time have a crazy moment.

Now I do have a living will and I have informed everyone no life saving measures on me if there is no chance of a good life where I would be dependent on others.

My son is a doc and promised me he would do that.

I feel when God calls me home I'll be ready.

We have living wills as well.

hmmmm....
«Louis» thinks he won't try to turn the Vachemobile S70 (made by Volvo) into a lead sled like the Volvo you show...

You know how I feel about all the
papers being in order. I have my
Obit. written and when things
change I get it out and make the
changes. Having to downsize and
probate lots of wills and write
Obit. you can never be to
prepared.

Oh, I love that cat/dog cartoon. I have the will made out & the funeral paid for. I know it will happen & I don't want anyone else having to be stressed by it.