Not in my area!

I remember times in my life counties and municipalities were in search of areas to put a trash dump, today it is called a ‘Land Fill’.

Everyone knows we need a place to put trash, but no one wants it in their backyard. Everyone knows they should throw less stuff away, but it is more trouble, and a lot of work. Of course Sherry and I do not ‘can’ and never have on a  measurable  scale.  Both our families did. I remember shelves lined with green beans, tomatoes, pickles and Corn.  We seldom had a tin can to throw away, the jars were washed and mama bought new rubber seals until the two piece jar lids came out, then she only bought the round cap.

Every time I see one of you bloggers that still ‘can’, it brings back good memories, and makes me proud to know you!

That is just one example of the reason we have more stuff to throw away.  All this was brought up in my mind as I  read of a community griping about an ugly cell tower in their community. One of those that makes an attempt to look like a tree.  I would be willing to bet that at least 99% of those folks use cell phones and we all want good reception, but the tower should be in the neighboring community not here. 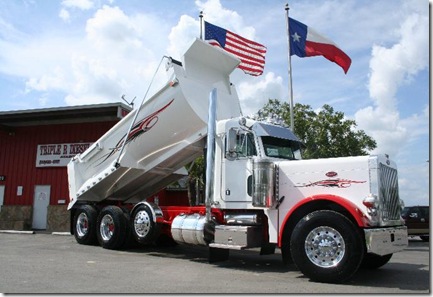 (Picture from the web)

An eye sore to one, is a beauty to others. Mark and I built a house for a fellow once. It was  a nice little 2BR house. He owned a semi-based Dump truck, the big ones. Some thought it was ugly parked in front of the house. That guy thought the truck was beautiful and loved to see it in his front yard. In actual money, he had paid more for the truck than the house. LOL  I personally thought they all went together well.

As I have heard, that is why they make two kinds of ice cream: Chocolate and Butter Pecan.  LOL

Beauty is in the eyes of the beholder! ( who ever originated that, said a Gospel Truth.) 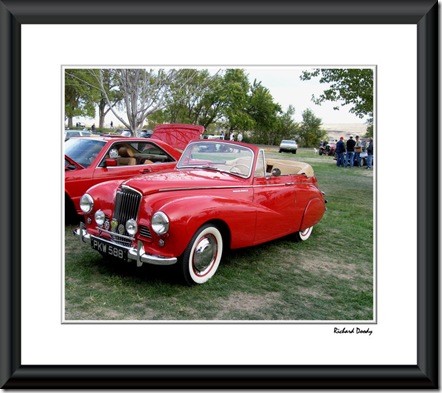 1951 Sunbeam, Love those fender skirts….This is a beauty!

Beauty is in the eye of the beholder. And what is one person's junk is another person's treasure. I have read where people go to the dump in their neighborhood once a week and exchange items! lol
sandie

computer doing its own thing.

Think I got it fixed. You know
me and people's yards. Do anything
you want to in the back but just
keep the front presentable. It
doesn't take that much effort.
They ruin the looks of the whole
neighborhood and make it difficult
to sell a house with junk houses
there. That is my opinion and I am sticking to it.

I'm laughing and remembering about Mel having a water drilling rig on the side yard. Our neighbor called it an eyesore and the inspector from the city called it a decorative piece. I planted morning glories on it and it truly was. lol

I know when we lived in Montana, people couldn't store boats or RV's in their front yards, probably something to do with people thinking they were eye sores out there (or maybe someone on the city council had storage units for boats and RV's LOL :)

Honestly, some of those cell tower trees do look like real trees, especially the palm tree ones here!

In our area we do have some huge land fills. The closest one to me is out in the country and back off the road so you really don't see much except for a huge mound that is covered with grass. I've never seen a cell phone tower disguised as a tree. So far all of ours here look like what they are, a cell phone tower. On the street where I live, all the telephone, electric and cable lines are in the back yards so the street itself is free of lines...I guess someone thought that looked better. Yep, we all see things differently. Hope you all are keeping nice and warm there. We are much colder here today after having a little warm spell.

I love "Canned Vehision", grew up on canned foods done by mother and us kids, we had corn and red kidney beans we canned, called it succotash, when times were lean we always had "Suck-OH-Tash", to this day I shuder thinkng about it, we have a massive Land Fill in an adjoining county, we take huige truck of trash up there 24/7, it has a constant large flame burning from the methane gas and the buildings around it are provided heat and lights from a methane generator.

True, no one wants any thing "in their eyes" unsightly. Me, after living in this neigborhood with the Pack rats of all pack rats, nothing is going to bother me to much. I HOPE

Most cell phone antenna is hidden behind large advertising over here. Yes, many neighbourhoods did argue about their construction.
An interesting entry, thank you. Please have you all a good Thursday.

I remember an elderly gentleman from the food pantry telling me he barely had any garbage at all...he didn't have enough "things" to have garbage. ~Mary