Update, yep another one

Friday we stopped in to see our home.  It sure looks sad. I think it misses us.  We have been very close for the past many years.  We have only left it to go on a cruise or two.

The secretary told me the machine shop had just called and the head was ready to be picked up.  (We were hoping the head had been done two days before and they were buttoning it up), but that was not the case.

So I am hoping that Monday the mech will be putting the engine back together.  When I see all the parts, power booster, manifolds, fuel lines, electrical stuff, nuts and bolts that have to go back in it, I hope they don't leave anything out.  LOL  I was hoping for last Friday, now I am hoping for Tuesday or Wednesday at the latest. They have had the coach for two weeks now, WE MISS OUR HOME!

WE have had a good visit with the family. Stella has a new hideout over by the tractor.   There is a mail box and she now has a 'Secret Friend' ;-)  who leaves her mail.

We have missed only two days walking 4-5 miles.  Sherry is enjoying her old school mates and folks she has known all her life.

I have finished a book, it is now being edited/proofed.  This one is entitled "The Appalachian Trail" sub title "Over 2000 Smiles (and a few groans).   This one has generated a lot of interest, it is a historical novel. (My mind is gone, I think I have already put that in the blog)  If I have told it, blame it on being homeless for two weeks.

Anyway that is where we stand, just waiting.   At least we have a swing, and a great place to crash.

History, in December 1955 I had already been kicked back from joining the USMC underage. And January of 1956 would try again, this time make it at the age of 17. 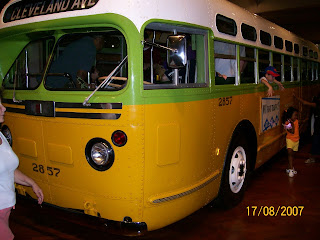 This is the bus that Rosa Parks was riding Dec. 1, 1955 she was asked to give up her seat, and refused. 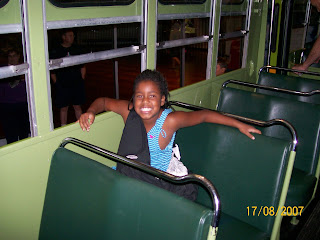 This the seat  where she was sitting. 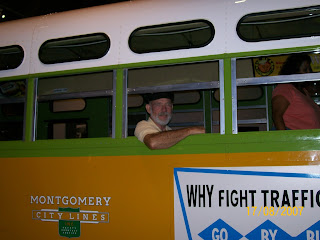 Yep, I had to sit in the same seat.
Rosa was one brave lady, no matter what your stand. To refuse  to give up her seat in the 1950's.

I'm glad Rosa Parks didn't give up her seat. I'm glad she was brave not to; she worked a long day, she was tired, why should she have given it up? I would have wanted to sit in it too myself.

I do miss your daily updates, Jack. In fact I went back to make sure I hadn't missed anything when I was wrapping up the A/Z challenge and I hadn't.

It is a lesson in patience with you and Sherry waiting for your home to be fixed. I hope it will be ready early next week so you can get rolling again.

I had my own lesson of patience over something here......but that's another story to be told so very soon!

Sorry to hear that the repairs are taking so long. Glad you do at least have a place to stay and family around to pass the time with. Sitting on the swing isn't a bad occupation.

Oh, bummer ... I'm sorry your home's taking so long to get better!
That's wonderful about the new book. I do look forward to reading it!

PS - Like Betty, I went back yesterday to make sure I hadn't missed anything. You've spoiled us!

Things are coming together for you guys Jack. I know you'll be glad to get back into the motorhome. It's a pain being displaced. And the book. I want a copy.
R

It always seems to take longer for any repairs then thought. I can imagine how much you miss her.

Rosa stood for all of us that day. I hope your home is fixed soon. It's hard to be missing it, I know.

I love the secret hideout and mailbox! Sounds like so much fun.

Dog gone it! They need to hurry up on the wheelestate! Get Sherry in there! Haha.
Lisa

I love the title of your latest book!
I can't wait to read it.
As you and your love wait for your home to be reassembled, I'm glad to know that happy times are your companions. Sending you both love.....
J