I don't want to alarm you!

Before we start, (ref YESTERDAY'S BLOG ENTRY) Sherry said, "I have a picture of you  guys in the rain" 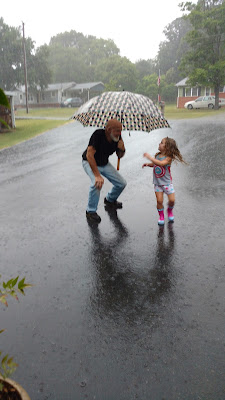 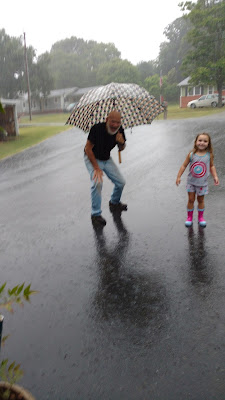 Just dancing in the rain!

Copied from an article on AOL concerning hand sanitizers:
"We're not trying to alarm people," said Dr. Janet Woodcock, director of the FDA's drug center. "Obviously ethanol and humans have co-existed for a long time so there's a lot that's known about it." 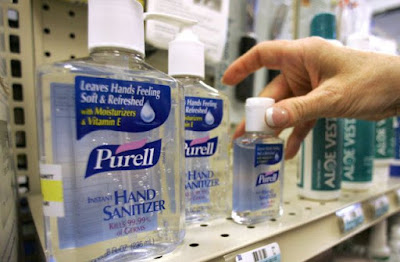 They are saying that after continued use ethanol is showing up in the blood stream.

I am not a prophet, I do not claim any extra ordinary knowledge other than I hope I use common sense. In my short visits around hospitals I am seeing hand sanitizers EVERYWHERE!  Even airports, and my girl has a small container in her purse (along with thousands of useable items,LOL). 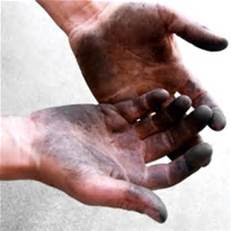 It bothers me because  for years I washed my hands in gasoline, kerosine and WD-40 to remove grease after working  on a car or lawnmower, etc.  Then I read that it could enter the blood streams thru the skin.  When I saw so many folks continually using the sanitizers it did bothers me, I have used it on occasion, but never on a regular basis. 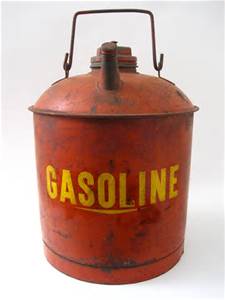 Once I learned it was dangerous, I started using GOOP,
It might have been as bad! 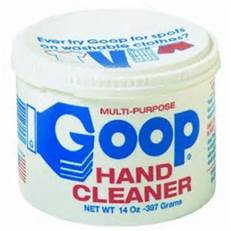 Headlines such as, "Don't be alarmed!"  Causes me to think of an old joke, "Don't get upset, but they are lowering a piano from the third floor and it is just above your head and it looks like the rope is unraveling."

That is my public service announcement for today. My advice is keep your hands in your pockets if you need sanitizing find some Lye Soap.

This song was recorded on old "vinyl records", long before the days of either tapes or CDs.

PS:  Mama did make and use lye soap at our house. Every hog killing season.  Lye soap is a lot of pork fat (IN CASE YOU DID NOT KNOW!). 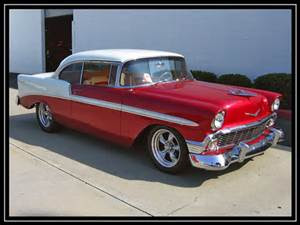 1956 Tudor hardtop Chevy.  There was one of these in GITMO, I wish I had bought it and brought it back.

New things are being introduced all the time and few know what long term effects they might have. According to all the things I've done in my life, I shouldn't be here at all. Good old soap and water works for me but there have been times I've used sanitizer too. I love the pictures of the rain dance ! What fun !

I use hand sanitizer every day as I handle money at work each morning and afternoon. In Phlebotomy school, apparently hand sanitizer was enough to use under the rubber gloves. Ive never really been convinced that it works but its good in an emergency. But I often wonder, "Just where does the dirt go?"

Such cute pictures of you and Stella playing in the rain :)

I rarely use sanitizer; wash my hands as often as I can. I should think about using the sanitizer towels at the store on the shopping carts but I just haven't gotten into the habit of it and haven't been sick in a bit, so must be doing something right.

You cheated a little, you have an umbrella. :-) Cute pictures, Stella is a little beauty. We had thunderstorms and lightning last night. Had to stay up later than I wanted for it to pass so we could take doggies out. Have a great holiday weekend! Sheila

Pictures of you and Stella in the rain are PRICELESS. So sweet. Interesting information about the hand sanitizers. We used GOOP or LAVA soap for hands back in the day.

That may be the cutest photo I've ever seen on the Ship's Log! ... I agree with Lisa, it's frame worthy!

Because I seriously LOATHE getting water under my rings, I keep a little bottle of hand-sanitizer in my desk drawer ... love its aroma! (I feel the same way about nail polish and felt-tip markers. Ya, I be weird!)

Very cute rain picture. Sure wish it was raining here today, it's really hot. I didn't know that about the hand sanitizer. I have it around and use it sometime.