Peanuts are one of the ingredients of dynamite.  (Because I knew this, I answered a trivia question lately ;-) )

"Stewardesses" is the longest word typed with only the left hand and
"lollipop" with your right.

The average person's left hand does 56% of the typing.

Okay, here goes. An entry with no designated time frame….

We visited Monticello once. I believe the cost was $3 or $8 for the tour.  We paid with a $10 or $20 bill and received two $2 bills in change. At first I was surprised, but then realized why. If you are familiar with the $2 bill you know Thomas Jefferson is pictured there.  So the change was a PR thing and I liked the idea.  We also kept those $2 bill for a while, but somewhere along the line they were spent.

Since I do not have an internet just now, I cannot check, but at one time our country produced some oversized $5 bills. I have seen a few of them, they are about ½” larger both ways.
(1914 over sized $5)

My brother-In-law Elmer had a few of them but they were stolen during a house break-in.  He really regretted losing those. He lost a lot more, but I remember him mentioning them the most.

Grandson Ben gave Sherry a Confederate bill once, she still has it. We have a few Old bills and one mint set of $1 bills, a sheet of them about 2’ square. You can order them from the Mint, these were given me by Steve Helms, my best friend Sonny’s son. If we ever move into a brick and mortar home again, I am going to hang them on the wall as a picture.

I thought in my will I would note that behind the ‘picture’ are enough numbers for all the kids and grandkids. At my death there is to be a drawing and the winner gets the sheet of bills.  Of course if Sherry were to order a sheet of $100 bills, now that would produce some interest!  LOL

Robbie Cook, a dear OLD friend of mine from my early teens ‘folds money’ as a hobby. We have 4 $1 bills he has folded for us into shirts and pants.  They are attached here on either side of our printer. I like’em, Thanks Robbie. 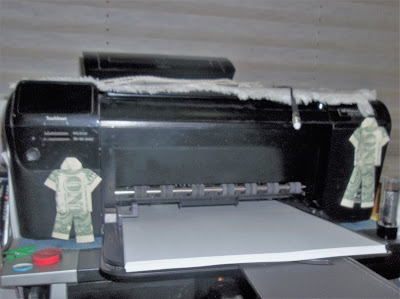 If the cashless society happens before my demise, I think I will miss carrying some money in my pocket. ‘Do you hide a bill or two in your wallet?’ HOW IN THE WORLD WOULD ANYONE HAVE A YARD SALE WITHOUT CASH?

Those folded cash chaps are adorable!

He didn't have much, but my late Uncle Edric used to send each of his nieces and nephews a $2 bill on our birthdays. I'm going to look and see if any remain in the hope chest. (Now, having a Confederate bill would be really something!)

Yes, I still carry a few dollars here and there. Back in the 80's (before everyone carried a cell phone in their pocketbook) I had a co-worker who kept a $20 bill scotch-taped to the roof of her glove compartment.... emergency $ in the event she broke down.

I carry a few dollars with me because I hate to use my debit card for less than a 10.00 purchase. I use my "wallet" app on my phone sometimes. Its great to just point my phone at the register and "ding". It pays.

When I was a kid, I would walk around the neighborhood selling candy bars when the school had a fundraiser. I came home with a silver certificate Im sure was given to me by mistake. Daddy caught it and bought if from me for.... a dollar. I didnt know the difference and he did. He later told me what it was worth. Im pretty sure he still has it put up for me.

Still dont have a dime
Lisa

So true about garage sales if cash isn't used. They would probably be nonexistent then. I remember hubby got a tie that was folded with dollar bills. Too cute and clever!

like those dollar bills folded into outfits. definitely cool.