Something about a NAME!


Little known facts:
…If Barbie were life-size, her measurements would be 39-23-33. She would stand 7 feet, 2 inches tall.
…On average, people fear spiders more than they do death.
…Thirty-five percent of the people who use personal ads for dating are already married.
…In Tokyo you can buy a toupee for your dog.

Names
There have always been men and women with a penchant to give their kids ‘unique’ names. We had a friend once named ‘Jinks’ McCumbee. Sherry talks about kin named ‘Yank’ Brigmon and Donald ‘King’ Hawes.  My mama knew a girl named Zoomer.

I have friends, James Dean Page and Elvis Jennings (Both named before the notoriety of their namesakes).
Grandsons Matt Dillon Darnell and Luke Vegas Darnell and Now a great Grand, Jude Atticus Darnell.

My dad and one of his eight brothers were named after Frank and Jessie James.  Both turned out good.

We had in our area a kid named Jessie James Gibbie and he was always on the Police blotter.

It was years before I could ‘live’ with my name, Jackie, comfortably. More than once in my youth I was told, ‘That is a girl’s name.’  I felt like the song, “A Boy Named Sue” before Johnny Cash sang it. Yeah, and then I went and forced the name on our first son! ........ OUCH!

Any real Zingers for names in your life time?  (231)
Nite Shipslog

Now, honestly, I do not know the size shoe this bike wears, or if the right shoe is on the front or not!!! 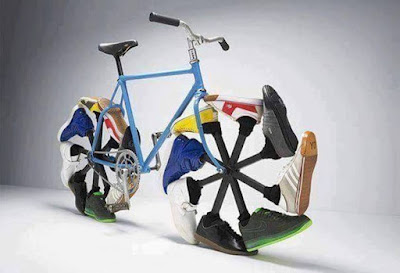 I am not sure a bout riding that Bike, but I do know that below is a great way to show off classic vehicles!!! 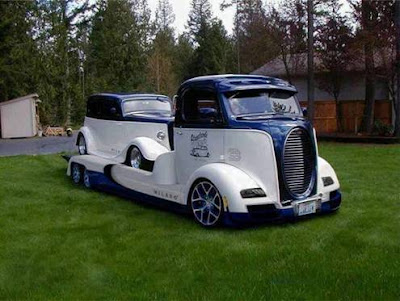 Gosh, I can't think of any novel/humorous monikers in my family tree.

Nevertheless! I never tire of hearing my son and DIL tell the story of when Troy was overseas and Lois (then girlfriend) gave him the telephone number where she'd be babysitting Saturday night. Arriving early, Lois overheard the mother on the phone, "You must have the wrong number; there's no-one here by that name."
A few minutes later the phone rang again: "No, I just told you, there's no 'Lois' here."

Aghast, my DIL had to inform her neighbor, "That's me; I'm Lois."

See, Lois says she was in first grade before she learned her name wasn't "Susie." Seems big sister thought she should have been named Susie and the name stuck. To this day, everyone in her family and her hometown still calls her Susie; even her Facebook page is listed as "Susie Patterson"!

we have a benjamin franklin in our family tree.

My niece was Bitsy Gail and our neighbor was Tippy Miller. Nothing more interesting then those. My name was Sookie Sal when my Mama got mad at me.

I can't tell you all the interesting names I've come across in my years of typing medical reports (mainly because of patient confidentiality). The interesting ones are the ones that have an apostrophe in them like D'Smith (not a true patient). How can you get a young child to learn how to spell their name with an apostrophe in it??? I'm glad we kept with traditional names for our kids and I'm so thankful grandson has a traditional name too. Step granddaughter has a bit of an unusual name and when DIL was pregnant and they were discussing names, I thought "oh Lord, please let it be a normal name." Thankfully it was (and so Biblical; bit of a clue, he was associated with Moses). I think parents need to think twice of the names given to children; they might like it but will their kids be teased about it over their lifetime?

These days I rarely hear any one call me by name. I'm ma or grandma most of the time. When I worked I still had a name, but those days are gone. Thankfully I do have some friends that still use my name. Never had any unusual monikers but I do love being called 'ma'.

No crazy names in my family. I don't think. I have an uncle Jackie. I have an Uncle on each side named Jim. My husband has an Uncle Jim. He also had an uncles James John and John James. Confused yet? haha.
Oh and my Husband has a cousin he hasn't seen since childhood. Her first and last name are the same as mine.
And I met a guy named Elvis Presley. Hes showed me his license as proof.

My name is used a lot. When I little I thought I was names after Shirley Temple. Then Mother told me no it was one of her friends growing up.
Most people call me Shirl which is Ok with me I like being called Shirl