2.    The katydid bug hears through holes in its hind legs.


I forget the energy of kids.  Elsie and Stella went to Carowinds Theme park today.  It is on the NC/SC border just below Charlotte. They were gone about 8 hours. Enjoying rides, Water Park and games. Just a few minutes ago before I started this entry, they bounded up the steps to the motor home still excited. Reece, Ben and his Dad, Jack Jr came in sorta dragging. LOL. 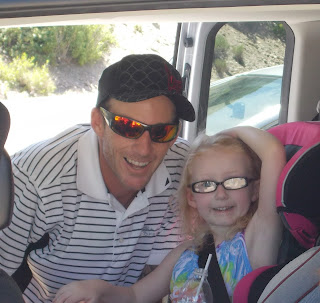 (This is Ben and Elsie 4 years ago, I have not shot any of them together this year but I will remedy that.)


This time is SWEET. Looking out the MH window and seeing Elsie and Ben here in NC, makes one want them near.  But their lives are settled in UTAH, and I would not attempt to encourage a change, that is, I would not initiate it.


There was a time that families were in the majority like the Waltons on TV. All in one area.  Many times in the same house or on the same farm. But now marriages, jobs and wanderlust separates many family members.

My dad & mom’s families started in North Georgia. Between them they had about 16 brothers and sisters. They mostly stayed within a 200 mile radius. North Georgia to Southern North Carolina. Usually it was a day trip to visit an Uncle and Aunt.

I guess the practice of using titles was dropped a few years ago. I always referred to mama and dad’s brothers and sisters i.e. Uncle Roy or Aunt Ann. I think a couple of Vernon’s kids call me Uncle Jack.

Many of our funeral processions went 150-200 miles. I always wondered how the police in a town knew to escort us through small towns. As a boy I noticed people would stop on the street (men white and black, would remove their hats as the hearse passed), all cars stopped for the funeral procession.

With the heavy traffic now I understand it is against the law to stop and impede traffic, in respect for a funeral.  We older folk from down south are finding it hard NOT TO STOP.  I do realize it is dangerous now.

Times change as so does my mental map, I started with our visitors and ended with funerals.  What a jump!
Nite Shipslog 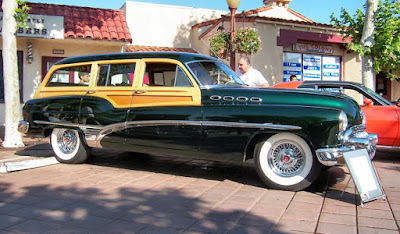 Above is a 'early '50's Roadmaster Buick Below is FDR's Plymouth Phaeton. 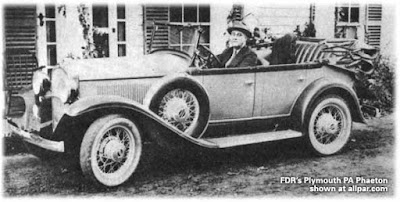 I followed a blog for a bit with a guy who worked as a hearse driver. It was fascinating how they set things up with people parking attending the service so it was easier to get them all in the funeral procession to the cemetery.

Sounded like the "young ones" had a good day! It is hard when family is scattered across the country. We chose to relocate down here to be close to son/family. If they up and move somewhere else, we're not going to be chasing after them. May be hot here, but we got a plan that carries us into retirement quite well, so we'll stick with it.

My nieces call me Aunt Betty though its okay if they don't. My nephew calls me Betty and its okay he does :)

sounds like your grandson and his daughter had a fun time at the water park. we still stop for a funeral here in the midwest.

Oh we always still stop for funeral processions, but I've never seen one on the interstate. It always touches me when I'm in the procession and see other's stop. It is much appreciated. But I guess it is a safety issue in heavy traffic as people hurriedly try to get over. I often long for times when family was closer. I wish we could just ALL pick up roots and head toward the coast somewhere. Sounds easy but not that easy. I find even driving to Mom's 1.5 hours away is a lot of effort. It's 3 hours of a day when you consider the return trip. So we talk on the phone a lot but one day I'll be making more trips down. Happy 4th!

The energy of the young is amazing! I guess I was once like that but it's been a long time for sure. It's always great to have them together, but like you mine are spread around the country too. Making great memories for those young ones is now our job. Takes lots of pictures and enjoy!

Andy tried duplicating every move of Syrus when he was about two and could not do it over half an hour and Andy is athletic. Just toting a baby around on my hip at my elder years has gotten very challenging and he's just a peanut. I guess that's why God made us parents at such a younger age....lol. Up north we still pull over in respect for a funeral procession. Some things should never change.
love n' hugs from our glorious weather up north...a safe 4th to you all as you enjoy your grandloves and the boys.

Like yours, Tom often speaks (wistfully) of his large, extended family -- where grandparents, aunts and uncles lived in but a few hours proximity of one another ...armies of cousins becoming one another's best buds in a minute's time.
He still feels a measure of guilt for moving his children away from their grandparents when they were very small; and today, neither seems to long for that sense of camaraderie.

When I chose to move west, I never dreamt I'd miss my family so much. 'Doing my best now to make up for lost time!

I think I come from a strange family. Three on one family married three of another family so there were lots of double cousins. You would think we would have been close but we weren't. Maybe because they were all older then me. We called all our aunts--aunt, except one, I now wonder why. The uncles we didn't call any of them uncle. Wish I had ask more questions.

I still stop for funeral progressions if I come across one. I follow the same rules as I do with emergency vehicles. If its a four lane road, ill usually just slow up. However, I will alway turn my radio down. Not sure why I do that but I just do.
Wouldn't it be nice if all families were like the Waltons?

If I pass a funeral her in the country, I always stop until it passes. If I'm on the interstate, it's too dangerous, but if I can stop safely, I do.
Good one Jack.