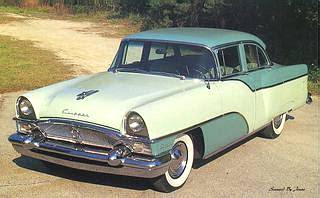 1955 Packard Clipper
(to be clear, there are honest people in all professions who get tagged because of others stupidity!)

Today: I thought about Used Car Salesmen were MOST untrusted in the 40-60’s era because of the many ‘misdirections’ they could come up with selling a ‘lemon’.

So I see a change over the years, and I agree, I find it hard to ‘believe’ a professional politician. That aside, I am looking at the reputation of the Used Car Salesman.

In the 50s men would go north and buy cars ‘cheap that were eaten up with rust. Bring them south, using body fillers and a new paint job. Thusly temporarily covering terrible damage that would return to the dismay of the buyer.

Searching just a few minutes, I learned those old tactics as obsolete as the dinosaur. So I must admit, in my research of this ‘problem’ the new tactics are more verbal, but just as real. I will suggest from now on someone buying a car do their own research to recognize the NEW slick sales pitches I have just read. They are simple to find.

They have names now, one called the ‘SCREAM’. That is when the customer returns, realizing they have been taken and how the ‘manager’ (THE GOOD GUY) handles it by demeaning the salesman, in front of the buyer (THE  whole procedure planned and expected) and offering the ‘fix’ (along with a freebie) that was also planned.  Much more complicated than the old saw dust in the tranny!

This post let me know how OLD I really am, and that technology exploded and at the same time con artists and ‘shysters’ have NEW tactics. With a little research, I realized ‘I know nothing’ of the latest sales world. :-O
Nite Shipslog

I don't think I could be a sales person if it involved doing unethical things. Seems the big thing here at least for cars is they don't want to haggle a lot with price but want to go with "how much do you want your car payments to be" and then work some magic deal around that. Thankfully because hubby works in purchasing, he's real good about doing research so he's all prepared when we go in to buy a new vehicle and usually walks away with pretty much the deal he wanted. If he passes before me, I'm just going to lease cars. I hardly drive at all and every 3 years or so I can turn it in and get a new model, don't have to worry about major repairs, etc.

I have never been able to trust a car salesman. I do not trust any mechanic either except the one I married.

Ha! After he read your post yesterday, Tom was telling me about the sawdust trick!
New or used, I desperately dislike having to deal with car salesmen. I was kind of surprised to see bankers on this list. No surprise the politicians and journalists. How about timeshare salesmen? (At my last workplace, someone - rightly - commented, "You can tell when they're lying because their lips are moving.")

Ouch! I’m not sure how my journalist peep got on this list. All the ones I know try to get the story right. I’ve mess up, but when I do, I to make it right.
R

That's a cool old car! I guess I'm not surprised about where politicians rank these days. I've been thinking they should start requiring a personality test of some sort before allowing people to run for office. Weed out the knuckleheads and people in it just for their own gain. But then who would be left to run for office?? 😉

I've never owned a new car and all the ones I've had were used. Thankfully I made good choices and I guess the car salesmen must have been truthful ones. All the cars I owned have given many good years of driving. That's not to say they never had any problems, they did because eventually things do wear out. But that comes with normal wear and tear. Like you I'm not up to date and the latest sales tactics. But I don't have any intentions of buying another car either.