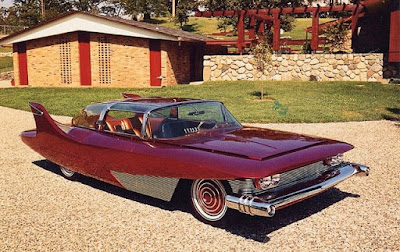 Bobby Darin's Dream car, a few of you may remember Bobby! ;-)

Now…
I have heard it many times:
Walk a mile in my shoes before you criticize and abuse…

On another forum I have read a lot of criticism of leadership and other humans. At times I may have carried it a little far with my sons until one said to me, “Dad, you give everyone some slack except me.”  I had to think a good bit about that and decided he was pretty much on target, and I tried to change.

THAT said, I have known 4 people that committed suicide. I also follow ‘Sean of the South’ whose dad took his own life when Sean was 11.

One was very unusual, my cousin, a wife and mother. No one knew what was going on in Willie May’s head, or what it was like to walk in her shoes. No one could share her thoughts no ‘justification’ because she would not allow it.

And then there was John. What a man. Tall and handsome. Retired from a prestigious job. Respected beyond most men. A wife, son, beautiful home and on the outside had the world by the tail. He was a good conversationalist and knew how to listen. Truly a very unforgettable man. Even his closest friends, golf buddies and his pastor had no inkling, we were all FLOORED at the news of his suicide. What would a walk in his shoes for a week have taught?

One was so horrible it could never be explained. Someone close to my in-laws tried to kill his two sons, crippled them for life, but succeeded in killing his wife and himself.

One a successful business man, happy father and husband. I think I know why, he had walked a mile in the shoes of those left behind by cancer. When he was diagnosed with terminal cancer he knew something not all did, he had shared a walk with someone close. He had nursed his first wife thru cancer until the end and witnessed too much pain and suffering. “I THINK” he did not want his present wife to go thru that. AND right or wrong…He had been in those shoes.

Be gentle with others, you never know what they are going through in life, or ‘inside their head!’ Try to be understanding. Life can be GOOD!

PS: I have always thought that ‘thinking of suicide’ is normal, but contemplating it is not. I could be wrong. Do you  have an opinion?

PS2: A family associated with one of our bloggers was hit so hard they started a suicide prevention program., when one of their young folks chose it.
Posted by jack69 at 8:48 AM

It is always a tough thing when someone takes their own life. I thankfully have not had it in my family though my daughter did try to a few times and thankfully didn't succeed. From what I have read and heard, it does leave those behind with so many unanswered questions, the main one "why." I do agree; we need to treat people kindly with compassion because we really don't know what is going on in their lives. I think most of us do think at least once in our lives about possibly taking our life, I know I did during stressful times, but I would never act on it. I know the healthcare profession takes it very seriously if they hear that someone is having thoughts of harming themselves.

Whoa, this is a toughie. Fortunately, I haven't known anyone personally who resorted to suicide … but have witnessed the grief left in their wake. Thank goodness my son sought professional help -- but I know he and a few of his 'brothers' are affected by the sheer number of veteran suicides every day.
Personally? I can't fathom every feeling that hope-LESS. Perhaps if I were diagnosed with ALS or Alzheimers. Yours is a good reminder to be compassionate, even when we don't know the details.

PS - Not so much while he was alive, but yes. I LOVE Bobby Darin.

Oh my goodness Jack that is tough and sad. I agree - don't judge others unless you walked in their shoes for a few miles!

Such a thoughtful post. Yes, we don't know what's going on in other's lives and we never know if we can be a force for good by just being a listening ear or giving a smile to someone on the street. I'm sorry for your loss of friends and relatives. They leave with questions unanswered for survivors to try and understand. We should always take anyone's threats or thoughts of suicide seriously and try and help if possible.

Oh. These precious people. What unknown hell they had in their lives that led them to take their own lives.

I do not think I can write more.

You are so right, we can never know what others go through and that is reason enough to always be gentle and kind to all. Thanking of others that have been touched by this terrible tragedy is heartbreaking for sure We can only encourage others that life is worth living, no matter what.