For today:
Leaving my 'giant' sculpture work, the dragon head, let's go to the Badlands of South Dakota.
The actual project began in 1948, but the plans were years before. The Native American leaders wanted the white people to know they had heroes also. This thought grew after the work on Mt. Rushmore was in the works.
Long story, The carving of Crazy Horse. He is the Uglala Lakota Warrior most famous for the Winning of the battle of the Little Bighorn. It was undertaken to depict a hero of the American Indian. When it is ever completed it will be the 2nd largest sculpture in the world.

Korczak Ziolkowski began the actual blasting in 1948, over 70 years ago. He died in ’82 and his wife Ruth took over as CEO along with her 7 children continued the project until this day.

The Indian leaders along with Korczak, refused money from the Federal Government.  A fear that again our government would ‘take over’. After all we didn’t have a great track record. Millions of $ yearly have come in as donations. When we visited no one could climb the mt for a close look. Now they charge, and with a guide you can go on up to the face at certain times. 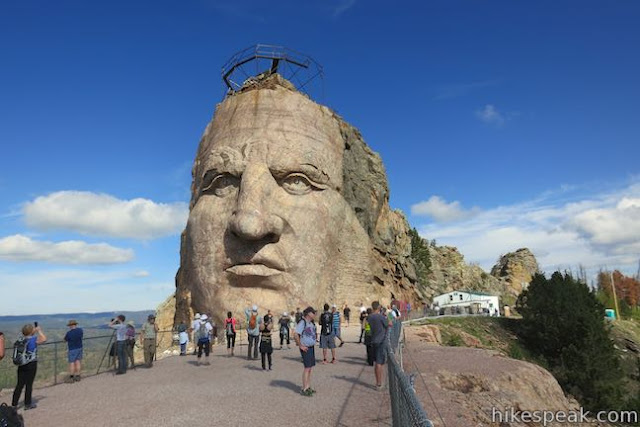 Obviously the work is slow, it has been in the works over 70 years and only Crazy Horse’s head if actually detailed. At least one of the Ziolkowski children has become a certified sculpture. She has even modified some of her dad’s plans. 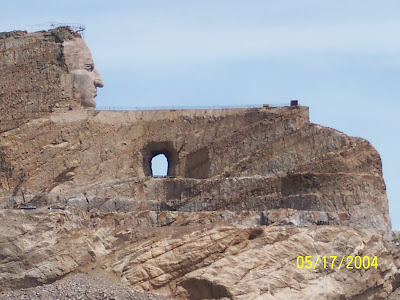 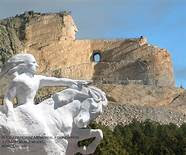 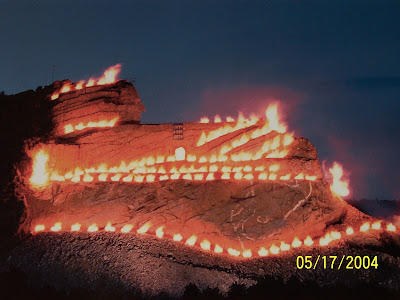 Talking about a lifetime project!!!!
I read the other day that a travel agent listed Mt. Rushmore as one wasted trip and suggested you do something else on your vacation.  I disagree. If you ever go to Rapid city, you should take in Rushmore, Stugis!! (My sons say), Deadwood, Custer National Park, and Crazy Horse.
We have enjoyed it at least 3 or 4 times. The Crazy Horse project may be a two life time or maybe three project. But remember it is not financed by the gov’t. but private donations as a whole.
If you  have visited the area, did you think it a waste of time?

Why doesn't glue stick to the inside of the bottle?
Posted by jack69 at 8:11 AM

I've never seen either crazy horse or Mt. Rushmore. So I'm thankful for the post of yours so I can see it. Little did I know it was still an ongoing project. Looks finished to me. Thanks to folks like you I've seen more of the world than I every could without leaving my chair. Just call me the arm chair traveler from Ohio. Thanks Jack!

I did not think the visit to Mount Rushmore and the surrounding area was a waste of time. In fact, it was one of our family's funnest vacations! There was a lot to do around the area for families and we definitely enjoyed seeing both Mt. Rushmore and the progress of Crazy Horse. That was back in oh my goodness 1999! We laughed because you could take a rock home for free (at that time) from Crazy Horse. We figured it was a way for them to get the rocks removed while they were working on the sculpture!

Like 'MA,' I also am an armchair traveler but from WI. You have taken us to many places and we appreciate it for sure. I have never been to the Dakota's but do still wish to go and see how magnificent these carvings of lifetimes are. Thank You again for taking me along, via my chair.
love n' hugs from up north where the winds are blowing in the 30's. It's going to be a chilly Packer game tonight

I would love to see all of the things you mentioned. I would really like to see our town build a new Catholic church before I pass on. Some times it's the small things that mean so much. Thanks for the story of Crazy Horse's sculpture. Blessings, xoxo, Susie

Best I can tell from my parent's home movies, I was about 3 y/o when they visited Mt. Rushmore. I don't remember being impressed … but then, I remember very LITTLE from that season of my life. LOL.
Never heard of the Crazy Horse sculpture. Oh man, how they're captured his scornful expression! I wouldn't turn down a chance to visit!

I’ve never been to the Dakotas but Jilda and I promised ourselves that we go.