IBM & USPS both learned a lesson 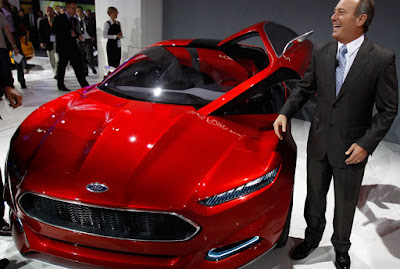 The future Ford EVOS
And now (My apologies in the beginning for a boring post!):
I was in on the ground floor of computers.  The forerunner of the digital world was IBM. Very High Tech machines that punched and read an 80 column card. A combination of punches in each column would represent a number, letter or special character. I was schooled to operate and repair the Key punches, sorters, printers and collators.)

(Above are a combination of all the punches used on IBM crds. the first ten columns are 0-9, A-I,J-R, S-Z and special characters)
The IBM card was the center of ALL corporations and our Government was the #1 user.  If you bought a US savings bond or received a Government check, it was on a form that was actually, an IBM CARD. The IRS even had a short form on an IBM card. I filed using one. It could be printed and processed at speeds of 2000 cards a minute. 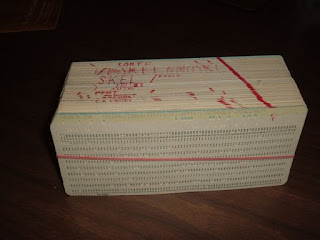 This is approximately 400 cards  (We would write on the top of the cards a description, after that you could tell if the cards were out of order)

IBM became a name to be reckoned with. They became so positive they had the business world on a string, they could see past cards. Their engineers were designing smaller and better cards. IBM is one of the largest companies in the world that learned a lesson, “YOU cannot sit back and say no one can touch us. 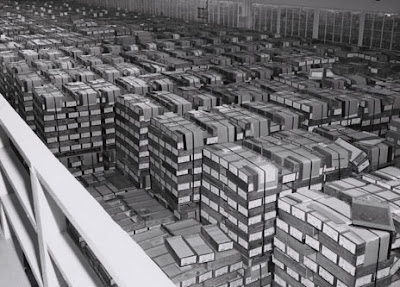 (This is an actual picture of some of the millions of cards holding history in the National Archives, each box holds 2000 cards.)

BUT kids like Gates and Jobs set the world ablaze with ‘Windows’ and ‘Apple’. Leaving IBM scrambling to stay afloat.

Businesses learn that complacency will destroy you. You only have to look at Roses, Sears, Grants, Kmart, etc. I am amazed at one fact. Sears became tops because of a thick catalog and mail orders. Now, basically Amazon is the same, just a different avenue.
Our postal service, at the wrong time, decided there was little profit in shipping packages. Now UPS & FEDEX has paid for fleets of planes and trucks just to deliver packages.  It is hard to stomach, but today USPS  is losing money and works part time for Amazon.
Nite Shipslog

Taken from a collection of notes left in milk bottles for the milkman, Enjoy:
**Please leave no milk today. When I say today, I mean tomorrow, for I wrote this note yesterday..
The last of notes actually left for the Milk man in England.... No one knew what 'cheap milk was' so I am assuming it it what mama called blue-john, what was after the cream was lifted.


And Amazon these days has its own fleet of drivers and vehicles to get their deliveries accomplished. Its amazing I can order something on Amazon and in some cases I can get it delivered the same day with no expense thankfully due to Prime. They know how to market and what the customer is looking for.

I am so old school...I do not trust the high tech way of life. Can not keep up with it . I see so much that technology can not fix...so I lack interest. I do remember using a punch card to clock in at work. LOL. Then it was on to gate clocking. Blessings to you and yours, xoxo, Susie

Makes one wonder if Amazon will too see it's end just like IBM did. Nothing every stays the same. Everything changes.

Life is like a tornado, changing too quickly, picking up everything in it's path and giving it a fling to make way for the next 'tornado' of change.
I remember also punching in at Control Data with punch cards similar to IBM's. What's new today is old tomorrow. Technology is fascinating and scary at the same time with too much change too fast. I thought your entry was very interesting. You haven't written a boring entry yet.
love n' hugs from up north where the sun shines through chilly air.

Im still trying to figure out Amazon. Home shopping would be nice.

From the coast
Lisa

Despite having (almost) failing Keypunch in my Junior year, I found this really interesting! You've cited some strong examples, what happens when someone or something becomes complacent. Come to think of it, that word leaves a bad taste in my mouth. Like Ma points out, each of us has room to grow and flourish. Those who don't are the architects of their own demise.

It is a quandry. The conflict from two worlds is about to happen. Amazon is a powerful entity.