Every Life has a story, some are short

1956 Packard Predator  Also never made it to production.

And now:
When my oldest nephew Howard was born in the mid 40's. I loved to visit my older brother and his wife. Ruth was going to be a REAL mother and that is what she became.
Odis was a dry humor comic at times with a sly smile. But I remember once that stung. I was only 5 years old & Howard a baby, when Od said, “Jackie this boy will be flying airplanes before you drive a car.” Howard and I were friends as he grew up. He became a business man, a good husband and dad.
He was 36 years old and I heard he was sick and went to see him. “Uncle Jack, the doctor says I have killed myself.”
“WHAT?”
“I came in last week after midnight making sure the carpet was laid and complete in a new house. I was hurting in my chest, thought it was gas. I did some jumping jacks, pushups and other exercises. The gas would not go away. I didn’t wake Helen, just drove to the hospital.”
“WHAT?” I mouthed in disbelief.
“The doctor says I have done irreparable damage to my heart.”  At that time he was walking around at a display he had set up for his dad’s fleet of giant model ships, for a newspaper or magazine shoot. He looked as healthy as he ever did. 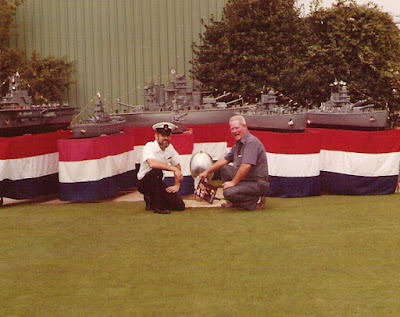 Me and Odis in front of his fleet.  Below is Howard talking to the reporter. 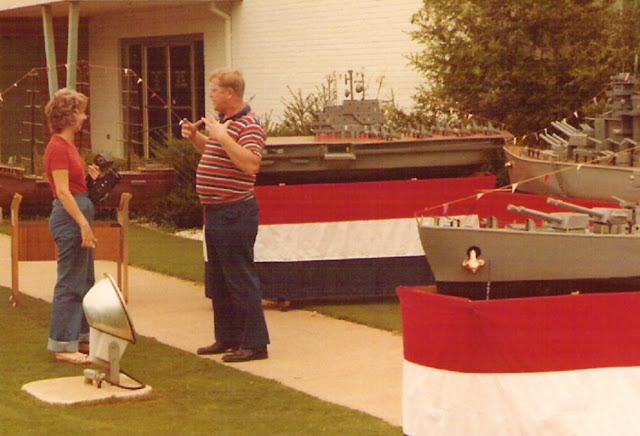 He was gone in a few weeks, his life story is amazing but short only 36 years long. His sweet wife Helen, and kids still miss him terribly and that was over 40 years ago I guess.
In that 36 years he went from a helper in a fish Camp (Fish Restaurant to anyone outside this area), to building and owning his own Fish Camp. Then to the Carpet business. Howard had a great business head, I am sure the rest of his story would have been fantastic.
I enjoyed writing it, but most of all reading your great comments on the entry of 'occupational stories'. It hit me later. Yes, not just occupations have stories, but every life is a story, sadly some are ‘short stories.’

Taken from a collection of notes left in milk bottles for the milkman, Enjoy:
**Sorry about yesterday's note, I didn't mean one egg and a dozen pints, but the other way round.
Posted by jack69 at 9:50 PM

How tragic! (I was going to say 'heartbreaking', but that unintended pun would have sounded flippant.) Wow, 40 years ago? I can't help but wonder if today's modern medicine might have afforded Howard more time.
My new part-time job has certainly given me pause to consider mine and my loved ones' own mortality.
Love how your words are, even now, keeping Howard's memory alive.

how very sad about Howard. but it's good to know he had a good life while he was here.

Yes some have shorter stories than others. we can only be thankful that they were part of our lives even though just a short time and became a part of our story too.

Sounds like a great guy and love the ship display.
Yep its “Fish Camps” around here. Everyone else calls them fish houses or fish restaurants.

He left a legacy of good friends like you. Too young to go.