Autos of beauty
I was ME in this truck! 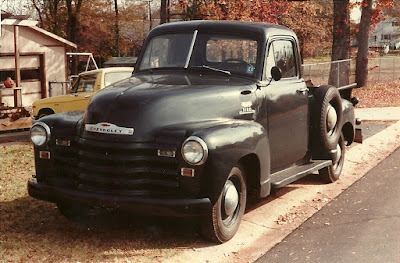 For today:
At one time I was me. I have heard from my youth: “Be yourself, everyone else is taken.  So I tried to be.  I remember a movie, “Rebel without A Cause.” The coolest dude ever was the shy/reluctant star, James Dean. Every boy I knew wanted to be him, and thinking they were being themselves. LOL  He was the ‘coolest’.
He died young in an auto accident. James Dean was a good race car driver. Film producers always stated in his contracts, NO RACECAR driving until filming was over During the filming of  ‘The Giant’ he traded his Triumph  for a Porsche 550.  He was driving it to his first race after filming in the Porsche, when he collided with another vehicle and was killed, cause of death a broken neck.
While everyone else was trying to be James Dean movie star, James was trying to be himself, he loved cars and speed. He died at 24. A week before his death a friend commented, “Jimmy, you drive this thing, you will be dead in it within a week.”
Being ‘YOURSELF’ can be precarious.  AT times you must do it in secret. LOL
I must admit, watching ‘other’ people who claimed to be ‘finding themselves’, can be confusing. During the Peace-nik- flower-child times I thought folks were silly. I am still trying to wrap my mind around the period of ‘jailing’ or ‘pants on the ground’ time. THEN THE piercing or enlarging the ‘zero’ earlobes gets next to me. I was raised NOT to be tattoo’d, I was ‘Being Me’ and got a USMC emblem on my upper arm. DAD-gummit I was  grown (17), Of course I was brave and hid it from mama!
It makes me sad when someone (IMO) has everything to live for  & does something stupid. I can think of many, but  John Denver comes to mind, dying in his experimental Rutan Long-EZ plane. Anyone, but especially those with apparently so much to live for, surprises me, gambling with their lives to be themselves.
There is a long list of famous youths who gambled and died..
I have no idea where this is going but I am stopping. This 81 year old man might be banned by NASCAR while trying to enter a ’55 Chevy in the Daytona speed trials. Maybe I am just remembering what it’s like to be ME!
We all wanna ‘be our-own-self’ at least one time before the Bell tolls! LOL

It's one to be yourself as long as it docent hurt you. I don't think we need to put on aires and pretend to be anyone else. Although many do, I'm just me but don't take many chances, I want to be around a few more years.

So many, especially young people, think they are immortal and will live forever. So sometimes they take big risks and risks I certainly wouldn't want to do! I don't get the earlobe thing either for enlarging it. I did hear it made good money for plastic surgeons when people didn't want the enlarged holes any more and tried to have them cosmetically fixed.

Well I think in some ways it is good to be yourself - but in other ways - it can be selfish - true?

I agree with Betty: So many of our young people believe themselves to be bullet-proof. I've never cared for high speeds - even when I drove a Corvette I'd take a good bit of teasing because I refused to 'let it loose.' Heartbreaking when you hear of a young person's untimely death from sheer recklessness. But too, the not-so-young - I'm thinking of Houdini. That sort of adrenaline I just don't get.

I think that being yourself can be very difficult as we have to be responsible too and they don't always go well together. It's good to be yourself as long as you don't hurt anyone else. I find it hard to understand the real me, but I was raised in a strict home and had to obey a lot of strict rules and values. I think I would have been different if my family was less strict, but I am pleased in some ways that my parents were strict as it has always made me honest and that is probably the real me. There are a lot of people these days who do not know what truth and honesty are, and some of them are leaders of our countries.

PROBABLY THE MOST IMPORTANT MESSAGE YOU WILL HAVE EVER READ, NEXT TO YOUR BIRTH OR DEATH I WOULD SAY.... said...
This comment has been removed by a blog administrator.
February 5, 2020 at 1:38 AM

You might have some spam there, Jack! lol
You are so right- it takes time to 'find yourself' sometimes. Especially when you are raised to be what someone else wants you to be. There is a fine balance between being yourself and ignoring 'niceties' and what one should really do.
As a people pleaser, it took me a long time to stand up for what I wanted to do and to say NO sometimes to doing/being what someone else wanted me to do/be.
Great post. Diana

It isn't always easy to be true to yourself, but it's important if it's important to you. I do my best to be true to myself...I do try to be/do God-pleasing but I Know I don't always. Life gets hard but we do what we can in the moment. It is sad the time wasted being someone you are not. Good one Jack. You always make me think.
love n' hugs from up north where I just cannot warm up today. Stay YOU

Today, Portugal is the Biggest Racist country that i have ever lived in. I feared for my life there and i consider myself lucky that my family got out alive! I have never lived in such poverty (Sopas dos Pobres everyday) 40% unemployment rate and 60% of the population earn less than $932 USD per month, and that’s considered Middle Class here! Within the European Union it is the worst of the worst place to live in.

The bottom line is the bulk of the People in the poor country of Portugal exist in a brainless comma that is fed by Ignorance, anti-Spanish hate, and severe Racism of pretty much everybody that isn’t Portuguese! And, Portugal started the Global Slave Trade in 1441 so it is definitely NOT a safe place for Blacks!!

I found important websites that explain the Severe multi-generational Racism and Hate that exist in Portugal today, and i highly encourage all to read them and spread the word in order to avoid innocent, and desperate people from living or visiting there. Get educated on the Truths about Racist Portugal now.

I HEREBY ALERT ALL PEOPLE ON EARTH TO NOT BUY FROM PUTUGAL, DO NOT SPEND YOUR HARD, EARNED MONEY GOING THERE AND BOYCOTT ALL PORTUGEE STORES IN YOUR AREA! DON'T BUY THEIR GOODS OR WINES!!!

THESE XENOPHOBIC RACISTS HAVE TO LEARN AND THE BEST WAY IS TO BLOCK THEM ECONOMICALLY!

+++FEEL FREE TO ADD MY BLOG LINK AND PICTURES TO YOUR BLOG OR WEBSITE FOR FREE! IT IS IMPORTANT TO TELL PEOPLE THE TRUTH ABOUT PUTUGAL!!+++