She said,”I know we just met, but take off all your clothes!” 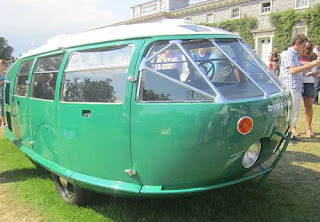 The 1933 Dynamaxion Three of these built. three wheel car with front wheel drive and rear wheel steer. Did not go over well.....

For today:
Yes, the pretty lady said just that, and Sherry standing right there! She was the nurse at the Hospital Emergency room. Yeah I finally gave in, I didn’t know you had to get nekkid at the emergency room.  I was told later it was because I was suffering ‘Abdominal pain’.

The Dr. was a former Navy man and called me chief thru out the 4 hours I was there. Two blood works, urine sample and a Catscan. Nothing could be found that was wrong. The only thing left was the unseen word, ’STRESS’.

I have had a few worries lately, but can’t imagine it being enough to make me this miserable. He asked if I wanted something for the pain and for the first time in all my years I said YES!

Sherry wanted to stop by Tony’s Ice Cream place, so we did. She had a bologna sandwich and me a hot dog (all the way). I celebrated with a butterpecan milkshake Sherry had a cone of Chocolate/p-nut butter.

My report for the day, Hope you all are well.

I am thrilled you are okay.
If it keeps up though get a second opinion.
Stress can do a lot of damage if you are under stress.
I am like Sherri - peanut butter and chocolate!!!!!!!!!
sandie

Glad you are doing better. I absolutely hate going through tests and more tests , only to be told you fine, just suffering from stress.

Stress is Dangerous, My Honey really tries to keep any and all Stressful Situations under control, I do not deal with stress on pretty much any level as it has put me back in the Hospital !!!! I take an Anti Anxiety Medication, .05mg of Xanax, Been on it for years now !!! Keep your cool and relax, Behave yourself, hope you didn't walk around in that hospital gown ???? Love and Blessings from the stormy, snowy North Country!!!! Gary and Anna Mae

• My doctor prescribed an Anti-Anxiety medication for me to take as needed while I was going through all these procedures I've had. It really helped me if you aren't feeling better soon give it a try. Glad she didn't find anything wrong and hope you feel better soon. Jean

What a homely vehicle! :)
In all seriousness, I'm sure it took a lot of moxie to go to the E.R. Glad they didn't discover anything alarming, but it had to have been a stressful
time. Bologna sandwiches and ice cream sounds like a fine antidote! Take good care of yourself, and listen to Doctor Sherry!

Glad all is good with your insides... Hope the stress level goes down as nice as the hot dog and shake! I'm glad you got checked out and hopefully the rest of the weekend will be good. Take care Jack!

Jack, you should take up Yoga.
R

Glad you got checked out, Jack. I agree with Sandie who mentioned getting a second opinion if you aren't doing better (honestly I would check in with a family doctor if you have one in the area). Did what they give you for the pain work? I'm wanting a shake and a hot dog about now :) Do stay on top of things and don't let matters rest if you think more needs to be done and investigated!

Take it easy and rest. Hope you are feeling a 100% soon.
Sending love from Opp,
Sheila

Gosh, Jack, hate that you're tummy is all wrapped in a knot. Take a walk, breathe fresh air and turn the rest over to the Lord. Do get that 2nd opinion tho if this keeps up. Find ' Jack ' time to relax. Bedside humor is always good ~ and of course, Nurse Sherry is a sure cure for what ails ya.
loven'hugs from up north where Andy and 3 of his boys will be up for a long past due visit. They sure have busy lives so we take what we can get.
Feel better our dear friend. Hugs to Sherry too

Glad you went to the doctor. And It is nice they couldn't find anything wrong, but yes, stress can do terrible things to us without us even realizing we are stressed out. Try to take it easy and forget what's worrying you. Just let it go. The good Lord can handle our problems much better than we can anyway!

Sherry made a great choice on the bologna samich. RO’s has the best. However, I am not a fan of their ice cream (yes Im still American).
I hope your stomach issues get better. Get to feeling better soon.

sorry to hear they couldn't pinoint the source of your discomfort. if it continues i'd get a second opinion. you hang in there. stress does cause various problems so they might be on to something. take care.