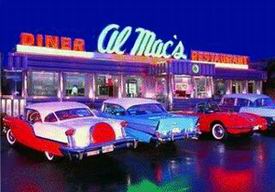 And the diners or the 50's
For today:
I only see Zorro on film. He is never around our basement except when I am gone. I catch him on film. He is heavier than Stormy D and has a fluffier tail.  He is also built closer to the ground.

Zorro eating and Stormy watching from her perch. All you see is Stormy’s shining eyes on the left.
We heard some odd noises from the basement  and I went down to investigate. I found Stormy D at the small spot I leave under the door for her to go in and out. Of course we have a grey cat and Zorro that come thru also, but there has never been a noise.

I move the trail camera around because I am concerned about raccoons coming in. I placed the camera outside for a couple days and we did have a coon come to the small hole but couldn’t make it inside.  That made me wonder if Stormy was guarding that hole. She could easily defend her sanctuary by swiping a nose with those sharp claws.

She said all was well so I got on the floor and petted her a bit. I like to have the camera around. Sherry did not know I had the camera and took a minute to pet Stormy:

How sweet Stormy is protecting her baby from the raccoon - right? What a mother!

Glad both are doing well and there have ben no coons in the house.

Awwww! I hope there's another book in your future, featuring Stormy D?

Looks like Stormy is eating up all that attention. Don’t worry about Zorro. He’s a tom cat. They prowl.
Glad to see your in a better mood.

So sweet! I'm glad you are taking good care of them. Are you going to get her fixed? I hope you're feeling better and you and Sherry have a wonderful weekend!

Love your video now if you could have made it.longer. You and Sherry are looking good so is the cat. I made it back home this afternoon and could have kiss the floor. I'm on my tablet.and it keeps.putting periods I went back and removed them for a while, but a lot of trouble. Take care, Jean.

Cats are incredible. I love the clips from your field camera.
Hope you guys are well.
R

Stormy and Zorro are looking good! Well fed and taken care of for being feral :) Loved the clip of Sherry petting Stormy!