More women in my life


Autos of beauty, by women. 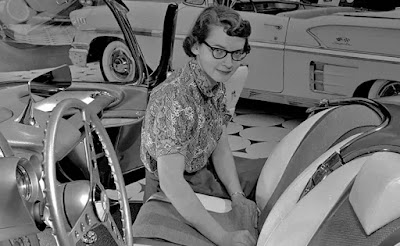 Ruth Glennie and the Fancy Free Corvette concept.She did the Corvette make over in '58

For today (Friday):
I have expressed my love for my mother-in-law Susie, a couple times. So if you have read, you know I hold her with the highest of praise for so many things. Her traits as a Christian and one of a frugal mill worker and housewife were very prominent in a woman who dodged the limelight. 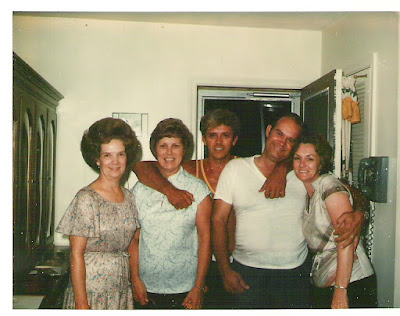 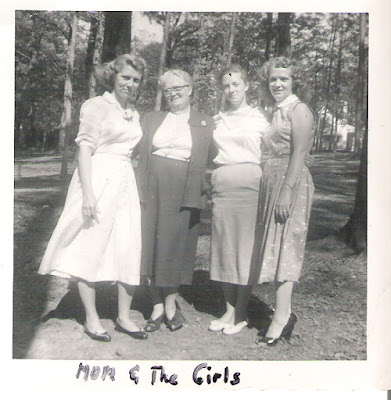 Above is Lennie, Susie, Sherry and Colette, Below is  Wiley and the girls 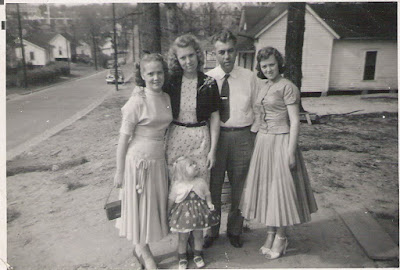 Susie had a great relationship with her daughters. I have taken note of  Lisa, who blogs here. She has a great relationship with her daughter.
I just want to mention Lennie and Collette, Sherry’s older sisters; physically, opposites.
Lennie was the oldest girl in the family She was the kind as a girl that could tie cats tails together. Sherry has told of her protective nature there on the mill hill. She could fight or throw rocks if a younger sibling was threatened or mistreated. Lennie was a mother of two and was married to Elmer.  He owned a catering truck and Lennie assisted even she could run the business. She had it all the times Elmer’s guard unit was activated.
The quote I remember most from Lennie. A local man had left his wife and the subject was being discussed. She said, “Elmer, if you  ever think of leaving me, you better tell me because I am going with you!”
Colette looked very fragile. She was a small woman and never seemed to gain any weight and kept her school girl figure. Like her mama and sisters, she was tough as nails. Where Kat and dick were our RV traveling buddies.  Colette  and her husband Sonny were ‘in RV’ traveling companions.  Our first trip however was in our Chevrolet towing a pop up camper. WE made a trip to California and back, we were all working at the time, and arranged 2-3 weeks off. Colette was just a joy to be around. 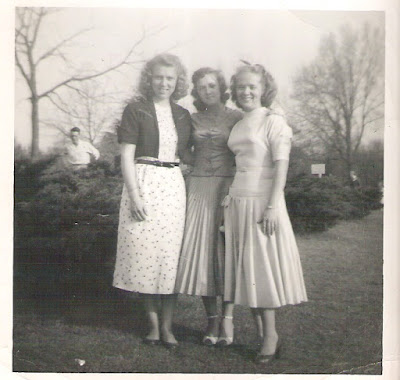 Lennie, Sherry and Colette
She raised a son and daughter, they are so much like their mom and dad. Willing to give you the shirt off their back and never ask anything in return. On every trip she insisted in sharing all the expense.  Very strong willed and ALWAYS would tell people, “We would have always gone to the beach on vacation. Since we have become close to Jack and Sherry we have seen a lot of the USA,” She loved to say when a place was named, she loved to say, “Been there, done that!”
Not long before she passed with cancer, we took a long trip from Belmont to the west as far as Mt. Rushmore. Then down toward Kansas and back.  Colette never needed any fan fare but was an anchor, a wife and mother.

WE three Sons in law learned when you  married on of the sisters you got the family!


Tomorrow I will talk about the happenings around here.

Family is so important for us also. It becomes our united front no matter what. With this virus, once again our ties are greater than ever even tho we can't be hugging and sharing a peck on the cheek. We saw Mama for the first time in nearly a month and she's doing fine, looking her gorgeous self while holding down the fort at the farm. She says even tho there will be no Easter celebration at the farm this year, we will have our fun and family time when this is over. Life throws curves sometimes, Big curves, but we all have turned it over to the Lord to get us thru. Your family is wonderful. You all remind me sooo much of my own.
Love n' Hugs from up north where we stay safe at home like you. Always sending hugs and prayers.

I was never blessed to have a brother or sister, so I 'drink up' all you write about yours and Sherry's! Like Ma's children, it's so refreshing to hear when grown kids not only love one another, but LIKE each other, too.
Sadly, you don't hear about that so much; in fact, Tom's son and daughter who live in the same city barely speak.

I'd say you inherited a great family. Photos say so much.

I think it is neat with the relationships you had with your sister in laws and their spouses!
That is to be commended these days!

I love your stories. My big brother Bill had quite a scare this week so while I was getting to talk with my other brother Ed during this lock down, the three of us kept in touch and with my big sis Mary too. I worried about my brother being hospitalized but I worried for my SIL Joyce. Although she was a farm girl growing up I hated to think of her all alone in their house.
I love the Lennie quote! Our daughter Noelle has a friend Mary. When she and Stuart had their twin sons after having a single boy and single girl Mary told Stuart, if you ever get any ideas of leaving me I am coming with you!
I treasure the three siblings I have left. I pray for good times to return so we can all gather together.
Your stories of these women always make me smile. Thank you so very much for sharing them.
Please stay healthy and safe. Take care Jack and Sherry.

This one, to st me is the sweetest post ever written; YOU have a way with words...do so enjoy the love you have for your extended family! Love and warm hugs from Chobee, Glenda

This one, to me, is the sweetest post ever written! So enjoy your siblings stories and hearing about Sherry's family, awesome JACK!!!

What a wonderful bunch girls. Sherry and her sisters sticking together is something I'm sure her mama loved to see. What a wonderful family you married into. Lucky you !

You are blessed to have such wonderful women in your life. They are all.beautiful.