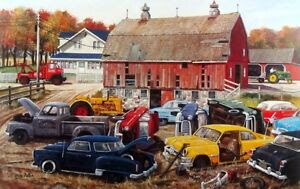 Now, Friday..
I miss life on the road and the compact quarters. Sherry has mixed emotions, misses some of it. She did not start a nomadic life style until she was 18 and married me. I had already lived in 7 different towns, attending 4 different schools while she lived in Belmont and kept the many of the same classmates thru school.

Uncle Oscar was a memorable nomad. He mostly stayed in the same 4 states, but after leaving Lockheed in the mid 40s he moved his family around following his dreams. He ran a garage, used car lot, a bread route, a grocery store, did a few years of upholstery until he bought a garage and junk yard. 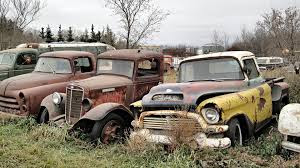 This time when we visited Uncle Oscar I knew he had finally made it. Now it was fun to visit Uncle Oscar. Dad, and Oscar would talk as they sat around a 50 gallon drum converted to burn used motor oil. I don’t remember Oscar doing any work while we were there, but boy did I have a time. I drove every junk car in the yard.  I raced some of them, I day-dreamed of driving thru the mountains and dodging bears. I imagined folks in the junk cars around me. We were on highways, dirt roads and high bridges.

Many times on visits unless there were cousins there, I was ready to go in a short time, but not at the junk yard.
The junk yard, playing in cars, was a boy’s dream. 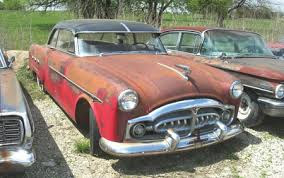 I was told Oscar, ‘was never the boss.’ No one around knew he owned any business. When he had his own car lot, people would dicker. I was told he would say, “Let me call the boss about that price, I’ll be right back.”  He would fake a phone call, return to say something like, “He can’t do that, but he will come to this figure.” 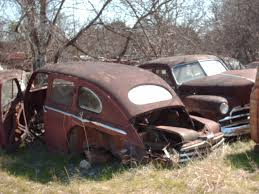 (I located a desert hiker here on the internet. I was attracted by some great photography of the desert. BUT I hate to say it, the JUNK cars he discovered in the desert hooked me. the silent beauty of 1920's trucks at times stuck. Spre parts & Pics caught my eye)
https://sparepartsandpics.blogspot.com/2020/04/clarks-pass-hike-back.html )
There were several other nomads in our extended family. Daddy was early in his life. Of my siblings, Kat married a preacher and they traveled over the world. Their last years were RVng with us; driving out west and to Alaska.

Most everyone travels some; any special places or unforgettable people?
Nite Shipslog
Posted by jack69 at 10:12 AM

A junk yard is a fun place to look around you never know what treasures you might find. I can imagine the fun you had driving all those cars. Maybe this is where your love of cars began.Most of the traveling I've ever done has been to visit my children and some have lived in far off places. I've been as far west as California I flew there though and didn't see many sights on the way there and back. But enjoyed the trip.

So I am confused - are you two done with your traveling on the road - or are you just on hold? It is in your blood I know.

I'm not especially fond of old vehicles … but the way in which you've woven your memories. Yessssss! (I wonder if 'our friend' Sean would be interested in this story.

I feel darn blessed to have seen so much of this old world and met some unforgettable folks … but I'd be stumped to pinpoint just one or two. Certainly, Glacier Bay and Tuscany are right up there.

All those old cars were once "loved" by their owners and taken on many an adventure I'm sure. Wouldn't you like to know some of their stories? We were a bit of nomads ourselves, living in various Western States. I think my favorite place, even though it was cold, was Montana. Good friendly people and beautiful scenery. We contemplate going back there to live though can't get past the cold LOL (so what do we do? Live in the HOT desert :)

we've been nomads on and off during the past 40 years. lived in maryland, pennsylvania, ohio, illinois, indiana and michigan. oscar sounds like quite a character. you were lucky to have him in your life.

I loved having ' Oscars ' in my life. There was Fred and Maureen who ran a lighthouse museum in Jersey, Cecil the peanut, cattle, oil man in TX...we still visit him. He and Bill really hit it off. He never shows his oil production end of things to anyone but he showed Bill. We also hunt there sometimes and share a whole lot of BS. You'd never know the fella was a very rich man, he's as genuine as yourself. Daddy is at the top of the list. What can I say. He was the best. He always said that you're a lucky man if you can catch a gal out of the swamps of Agenda township. He caught Mama and "what a catch," he'd say. There are so many more 'unforgetables' in my life, too many to mention. And of course, my Bill. He's made an interesting life for our family. Can't praise him enough, lol, except when he hits my 'irritation' point. lol........and we do love our junk cars n' trucks.
loven'hugs from up north where we've been busy lifting the southeast corner of the barn so she lasts another 100 yrs. Stayin' busy and safe.