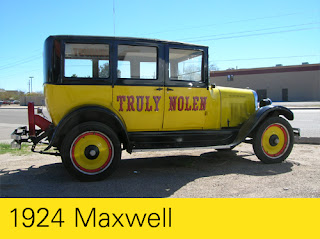 Truly Nolen was a far sighted man.  He ran an exterminating company in Florida. You could see cars like this all over Florida, parked in HIGH Visibility places. He must have owned at least a 100 of these. 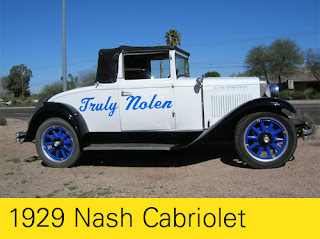 I am feeling better. Thanks for your concern, I do appreciate it. Your comments and advice are not lost here but the 'small' stubborn streak I DO NOT have (but Sherry says I do) might have shown up. However, right now I am holding my own and haven't said any  many bad words.

I have some pictures of the home improvements (cats later). 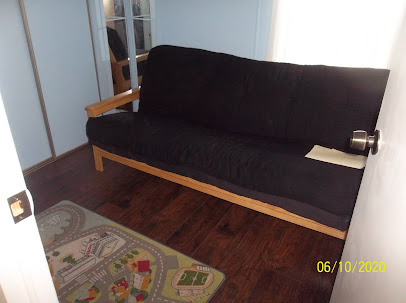 Son Mark brought this Futon for the small Bedroom (aka computer room). My kid's exercise rug on the floor where I do my exercises at night. 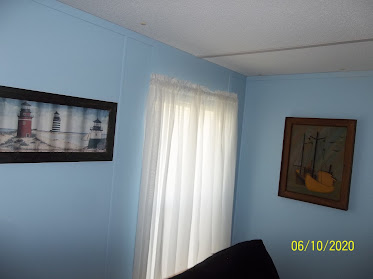 Two pictures hung here. the light house pic did not come out well but it is painted on corrugated metal giving the effect of Waves. LOL 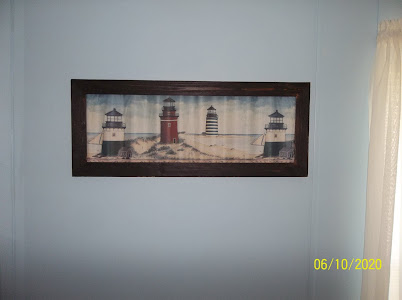 Below is a picture added to the Master BR. & Sherry came up with an idea for curtains on the narrow windows. 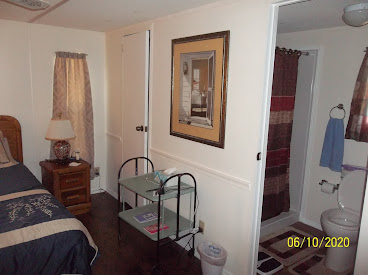 Below is the living room. Mark brought all of the pictures (except the light houses) and had a nice mirror that wasn't too heavy to hang.  We like the layout. 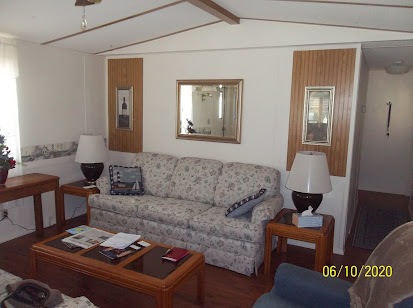 Sherry picked a nice arrangement and it fit well in the living room as well. 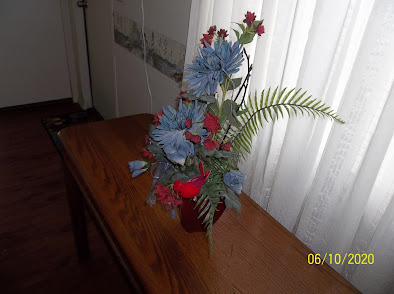 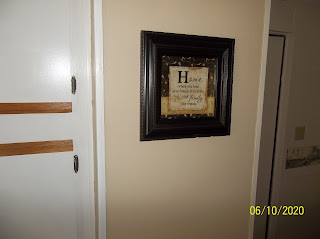 Above in the kichen area and below the other was added to the wall in the living area. 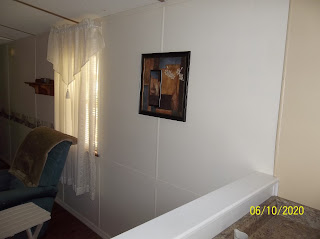 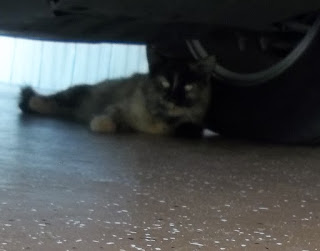 Update, Scruffy is now named Lucy. Sherry wasn't happy with the name since Lisa said the calico was most probably a girl.  Lucy still won't let me pet her, but it took a month before I got to pet my 'Stormy D,' may she rest in peace.  I got the above picture under the car. Sherry got the one below when she came out. 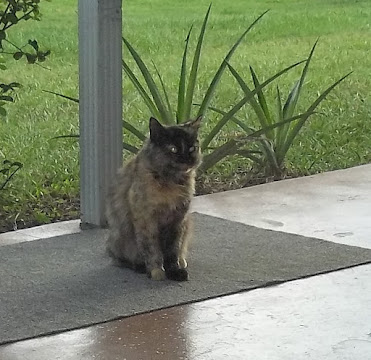 Tux (Aka Tom Tuxedo) on the other hand will let me pet him and I checked his paws yesterday, he still has his claws, so he most likely doesn't own a real home. 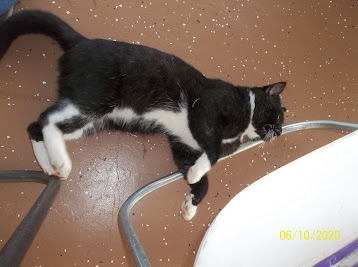 He will roll over and over to let me pet him. 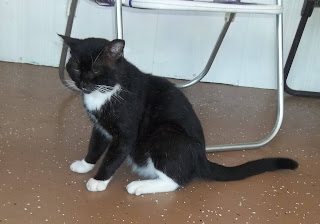 You would normally see the coach behind me and not the neighbor's trailer, but we did deliver the coach to the RV hospital (aka Coach Crafters) today. 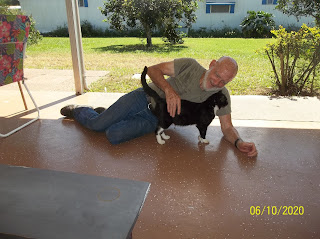 Sorry for the over load of pictures, but for some reason things are moving faster tonight.

And YES, to son Mark's question (BTW he is NO CAT person), 'Okay dad have you ordered the cats a hundred pounds of food yet?'

Not yet, but I was supposed to have 16 pounds delivered today, Amazon let me down. LOL

One more picture:  The kitchen cabinets after I finally got pulls and knobs installed. 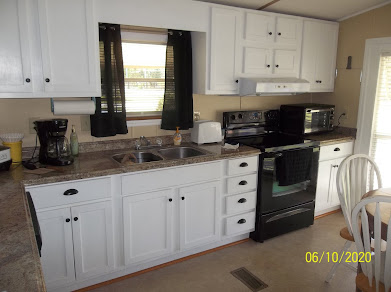 Thanks for  your time and patience.  It is sweet having people stop by whether they leave comments of not, but of course we do enjoy reading all comments.

You and Sherry are doing a great job of making that place your own! Love the kitty pix ~

You and Sherry have made this house into a HOME! I love it. And you have found cats already? Amazing. Love the kitchen cabinets too.

We will always miss Stormy but glad you have other cats to keep us entertained :) Love the kitchen! Actually the whole house!! Everything looks really good!

Your home is so pretty. Sherry is a great decorator and you sir are a great artist. Love the light house picture!.
Our camper is sitting across some permanent homes here in the campground this time. Last night we heard some excited women as one of their cats had came back after not being seen since February. She was a big black cat and acted like she had never left. There are a lot of strays over here and they are fed regularly by the locals. They are fun to watch.

Sunny and warm on the East side.
Lisa

Your home looks beautiful! Nice job! I think cats smell out cat lovers. My Granddaughter had a tuxedo cat..Sammy...and he was the nicest cat I ever met! He disappeared and looks just like yours so I'll have a happy thought that Sammy found you! Take care and I'm glad you're feeling better.

Your new home looks wonderful. Very warm and inviting. Adding all those touches like pictures and flowers really makes a difference Glad you are settling in and feeling better !

What a difference those accessories make! I've seen some signs/paintings done on corrugated metal - neat effect. Mostly, I'm loving the black-and-white kitchen. Oh, and Tom has the same shower curtain in his bath. (Great minds, LOL). Thanks for the tour! Now, please go put your feet up!

Those are some really nice Pictures of your House and it looks like I could walk right in and be very comfortable !! Nice Decorating Job by your Honey ! Glad the Motor Home went to the Shop so you don't over confident and try to drop the Engine and overhaul it ! LoL ! Take care of those Felines!! sending down Love and Cares, Gary an Anna Mae

Every time I blink, you've added even more charm to your lovely abode. And cats, more cats found you. They know a cat lover when they see one. I'm so glad you're feeling better. I'm particularly glad you turned your coach over to someone else to fix. It sure takes a load off your plate. Relax and enjoy the fall air.
loven'hugs from up north where we cut and vac sealed our lil' pig today, next Bill will be smoking bacons and hams. Yum.

Jack, You know cats are like kids...once you feed them they never leave. LOL. I like Tux, he is so cute. Your house is becoming a home. Getting it's character. Blessings to you and Sherry. xoxo, Susie