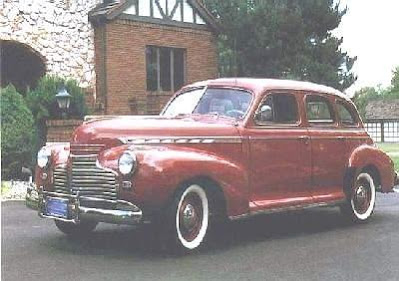 The 1941 Chevy fordor (4DR) The car my dad drove to the First Campmeeting I remember, 1945, except his was Black of course.

Growing up I cannot remember our family taking a vacation like I think would be normal. Since my dad was a preacher he considered our attendance to Church conferences and Camp Meetings as vacations.  I was good with that.

Did you ever attend Camp Meetings? In our part of the country many ‘religious’ families along with the pastors treated Camp Meetings as a vacation. Oh yes, it was a time for boys to flirt with girls while the grownups were inside the tent, worshipping and enjoying the freedom to praise the Lord.

Camp Meetings were so crowded, “I could seldom find a seat.”  It was sort of a game for us ‘rebels’ to walk around the tabernacle or Tent in groups of boys and girls. Laughing and talking.

I was fortunate, my dad and mom did not keep a tight leash on me at camp meetings.  The area around the meeting place was policed by ministers that volunteered to be ‘watchmen’ to sorta herd youths, back into the lighted areas should they wander off into dark places.  It never happened to me of course. LOL

The church leaders had enough sense to know young people; so the snack shop(s) remained open during services. There some daring young boys that would buy a girl a snow-cone or Pepsi.  I honestly never did get up the nerve to ask a girl, but I did talk to many preachers girls my age that I knew. We did have a lot of fun.

There were times Dad would take us camping over night with family.  Usually it was Uncle Irvin and Aunt Bert and their kids Bobby and Sister (Mildred).  That was a fun time.

BUT we never went to the beach and lived in a hotel for a week. I am sure dad could not afford it.

Come to think of it, Sherry & I seldom took a ‘Vacation’ with our boys other than sleeping in a tent in a state park.

I am always enamored at men like Myra’s dad who saved and took vacations that only other dreamed of. I think that was so far-sighted. Even trans-Atlantic ships were not exempt. I still smile at Myra saying the boys in France called her a ‘boy-girl’ (I think) because she wore pants.

Anyway, was there a vacation you remember as a kid?

PS: I mentioned my cousin, Mildred above. She was called Sister. I thought that was her name for years.  My best friend Sonny had a brother that everyone called Brother, I neve knew his real name.  Did that ever happen in your family?

Aw, thanks for the shout-out! My parents were certainly not wealthy; and in fact, worked 3 jobs between them. My isolated home town had 'nothing' in the way of entertainment -- and 99% of the time daddy was at work on the 3-11PM shift. How they looked forward to their summer vacations! The most memorable? Criss-crossing this old USA in his '53 Ford, usually to Florida where his brother pastored a church in Sarasota. I vividly recall a deli in St. Pete (Wolfies?) where he'd always buy me a banana split. They also featured an "all you can eat" desert bar. After 8-y/o me had gone back for the 3rd time, some random man yelled, "Call the doctor; she's going to burst."

LOVE the memories you painted of the camp meetings. The easy camaraderie you enjoyed sounds like something out of a Hallmark movie. :)

Mom and Dad had four kids. I remember vacations to the beach were free for signing up to listen to time share seminars. So one out of three days of vacations were sitting all day in boring seminars. Lol.
We went to church camp every year. They were fun and yes, a lot of flirting going on.

PS Daddy ended up buying a time share after all us kids left home.

Our vacations were always to se my grandparents on their farm and that's on of the best memories I have. Never went to a church camp but did a few reviiaos that were similar. Thanks for jogging some good memories for me today !

We were 9 kids in the family so we never did take ' vacations ' like smaller families enjoyed. We did, however, go to the lake nearly every weekend and during haying season, every night. We thought we were in heaven which we were.! Mama would pack a picnic lunch of course, enough sandwiches and cookies for she and dad and their kiddos. We'd have a blast. The lake was 22 miles away so there was always a head count before and after each time in the Chevy Suburban. When we kids were old enough, we'd get to go to Camp Luther Bible Camp.......there too was so much fun meeting and playing with new friends. Thanks for spurring such fond memories. Life was and is grand.
loven'hugs from up north where we're having another gorgeous day in the upper 60's.......feels more like Sept. than Nov. We'll take it!!!

I remember church camp...the best time of my youth. I still long to sit on boards held up by cinder blocks in the woods( outside church) I had a couple years where I got to go to church camp and get away from all my sibling...it was the best. I love my family, but as the oldest girl, I needed that break. Blessings, xoxo, Susie

Never been to a camp meeting, they sound like fun though with getting together with the added bonus of some preaching and singing :)

We didn't take many vacations growing up. In fact only one that I remember. We went back to Pennsylvania from California for a 2 week trip to see family. I was 12 at the time and it was my first plane trip :)

Ah, Camp Meeting. That was indeed a wonderful annual tradition in our family. My mom's dad was a preacher, and I had an uncle on each side who was a preacher. And, yes, Camp Meeting was our vacation most of the time. We did take one 'actual' vacation I remember, in 1966; and we spent about half of it in a cabin at another state's camp ground (but not when Camp Meeting was happening!). Those are terrific memories.