Gasoline? Nah I am missing saltines crackers, shelves are empty! The first Ford electric car (not sure how long the extension cord was!)

And now some thoughts for today:

Our lives  have been in an uproar lately. Not talking about the electrical storm last night, but the economy and supplies. With all the turmoil over in the Ukraine, I feel sorta silly mentioning the price of gasoline.  I did write President Biden with some suggestions concerning oil.  I dropped a little reminder that back when President Jimmy Carter had established the Department of Energy we all thought it was to organize and work to make us energy independent and efficient; back then we were too dependent on Arab oil.  I was hoping our President Biden would now turn that Department loose to do the job for which it was created. To his credit he has given more permits to drill on public land in his first year than former president Trump..  I also asked him to reopen that danged big pipeline installation.

Now I find that while I slept, zzzzzzzz   we have increased our dependence and now even buy oil from Russia, WHAT?  DID the department of Energy forget why they were created?  That bothers me.  Now before you think I am blaming just the democrats, that isn’t right. Since Carter we have had both colors, Blue and red in office. So there is room for a sharing of responsibilities.

I Mentioned to Mr. Biden that most of us know electric, hydrogen or nitrogen cars are coming in the future, but until then we still need gasoline and diesel to run this country and to allow me to drive around and appreciate the USA.

Did I mention crackers? I am guessing that millions more of Americans are eating  Chicken Noodle soup now and expending our supply of crackers.  I love crackers; in soup, with cheese, with p-nut butter heck, I love ‘em crumbled in a glass of milk. 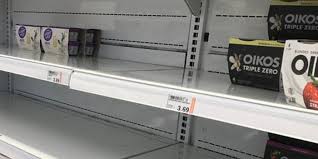 Is there a good substitute for the saltine? 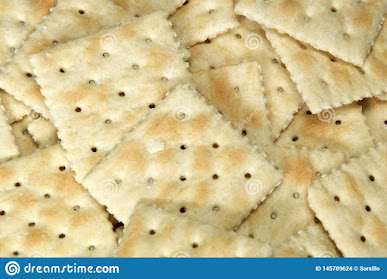 BTW I did get an answer back from the White House. I was thanked for my input, and it would be considered and that the White House always wants to hear from interested citizens. So there. My advice is on the Front burner I bet!

11. MOSES DIED BEFORE HE EVER REACHED CANADA THEN JOSHUA LED THE HEBREWS IN THE BATTLE OF GERITOL.

Ha! I'm certainly surprised you got a response from the WH -- but wouldn't hold my breath Joe's going to extend an invite for further consideration. (Wouldn't that be a hoot!)
Saltine shortage? That's a new one! My son's an indy distributor for Little Debbie -- and since this whole mess began has struggled to get even one-third of his bakery orders.

THERE IS NO SUBSTITION FOR A SALTINE ~ EXCEPT MAMA'S BISCUITS!
**************************************************************
However, I'm Joyous enough to have seen that photo of Sherry again. She looks like she did when Jack, Jr was a pup and Mark was "on the way"! Our family has never forgotten how YOU came out to the farm [with a blizzard approaching] when David Luke was eager to bust out of Mama's womb, and saved our Dad from driving into Moberly Hospital on snow and ice!!! You're revered for saving Mom from having Kenneth say "drive like Hell, you'll get there!!!
At this point in time, I've had (Sherry commented on Facebook) both eyes done; can see out of the left (first one) blind on the right (only 3 days - I diligently do my eyedrops) and gonna be fine! Just cannot see right now. And, furthermore, I get your posts via email ~ but there is like 18,000 [no joke]
that most should be sent to trash. So, due to time constraints, I cannot get to my emails. I know you Darnell's love me, in spite of myself. God Bless, love and hugs, Glenda

Our saltine shelves are pretty empty here too. I don't get it! Oyster crackers though are still in abundance :)

Nice that the people at the White House took the time to respond to your letter. As for the gas situation I think we can all afford to cut back on driving some. It's the least we can do. We did it during the last two years being forced indoors due to the pandemic, and we can do it again if we have to. As for the saltines, our pantry is stocked with crackers so I haven't had to buy any lately, thus haven't noticed there is a shortage. Hope you find some soon though.

WE don't have many shortages here, but groceries have gone up in price a lot. I think twice before I buy them now and often go for the off brands instead. Dollar stores also offer better price on some things. I try to check out all of them for the best prices before I buy. Thankfully there are many stores close by and I don't have to travel very far and don't use much gas.

It just cost Bill $62 bucks to fill up his single cab chevy plow truck...it should last him til spring as the snow slowly melts. Our shelves haven't had the salted Saltines for a long time. We did try the wheat ones which were ok. The Oyster crackers take a lot of tiny pieces of cheese tho...mouse size. lol
Like 'MA' said, the dollar stores prices are a bit better. They don't have Saltines either, but try the Zesta crackers...
Loven'Hugs from our north where we woke to minus temps again and it's still cold at -11. We're hoping for sap tapping weather so Andy's family can maple syrup. We have way too much snow in the woods yet to bother this year.