The IBM Card and the Chad 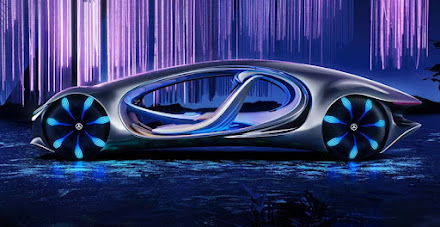 This is the result of IBM & Daimler for a futuristic car.
Update:  Friend Victor asked had I eaten Haggis, Negative, I will stick with Livermush, besides, Haggis is illegal in the USA… really!
Some thoughts for today:

I was wondering if you thought about the word I mentioned previous. I thought a few of you might remember the word, ‘chad.’  It made the news many years ago in the presidential race between Bush and Gore.

This is an IBM card, there was a period of time the world centered on the IBM Corp and its famous Card. Most businesses and Government paid by check which was an IBM card. All Government bonds were on IBM cards. Many places we worked used the IBM card for time cards. And Florida  used them in elections for ballots.

The card has 80 columns, each column has 12 positions. Combinations of these punches can easily be read by we who know the codes. For instance an ‘A’ is a 12-1 punch in a column, etc.

There were also colored top cards, left corner cuts, right corner cuts and no corner cut cards to further define the card. In business the card was punched then passed to a verifier who uses the source document to re-key  & verify the card. The verifying machine cut an ‘OK’ notch on the 80 end to show it has been verified.

The small punched chip is called a chad. They go into a chad box in the key punch machine.

The catch was IBM made cards with all the holes pre-cut 98% thru the card.  This allowed for a human to hand punch the card using a punch, there in lay the problem, not all the punches were pushed out, half punch you could say leaving the ‘hanging chad’; so some votes were not counted properly. 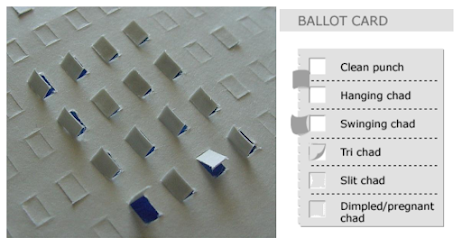 Personally I believe MOST people who work our polls are good honest people just like you and I. I know they want their candidate to win, but also want an honest count. I trust them. 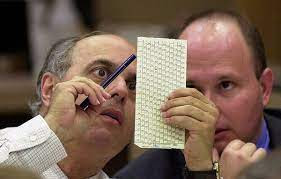 The punched card ballot was a good idea in theory, but it was not good in practice. TOO many voters had no idea that not pushing the stylus all the way would cause a problem.

In searching the word 'chad', I learned a lot. Most about the country of Chad. Then there was a UK slang term, I will not discuss here. ;-O.

YES, there was a time IBM was king of the electronic world. Management never saw the demise of the card until too late. (One of those things TOO BIG TO FAIL). There was a ‘secret’ IBM plan to make an even ‘smaller card’. A former shipmate working for IBM research, was assisting in its development. 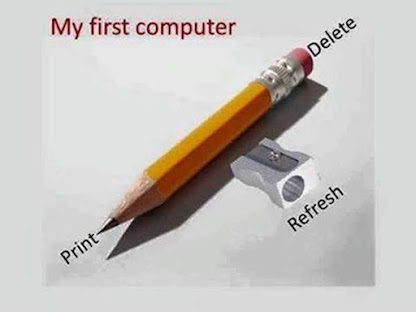 Friend Buddy sent me a pic of his first computer, I happen to know it is his present computer!

Can’t say I remember IBM cards. Must have been before my time.

Thanks for the explanation. I didn't know what a chad was, but now I do. It's been awhile since I've seen an IBM card but do remember seeing them. We can only hope all people are honest and that are votes our taken care of properly. I would think they are all checked out before working at the polls. I believe that every vote counts and wouldn't miss the chance to do so.

Whew, that election chad scandal brings back memories. To tell the truth, I wasn't so sure of the details ... thanks for 'splaining!
My one-and-only brush with key cards occurred my senior year high school and merited me a (generous) "D." Foolishly, I thought b/c all office-related subjects came easily, that Keypunching 101 would too.

I did not know haggis is illegal in the USA. I wonder why.

I knew however that epistles are the wives of the apostles. Also that King Solomon had many cucumbers.

Thanks, Jack, for the explanation about the chads! I know it was a big thing in that election! I do not remember seeing/working with IBM punch cards. If they were around when I started working, maybe who I was working for didn't have use for them?