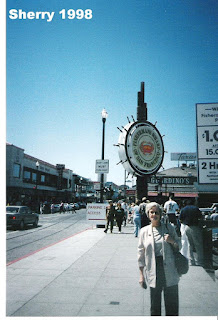 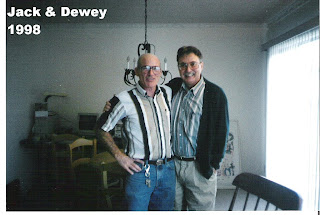 Me & My cousin Dewey (referred to by some as the Nut). San Francisco also. 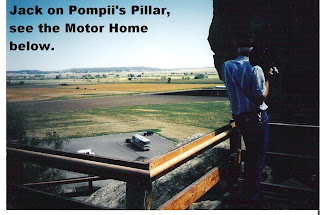 From atop Pompii's pillar. Land mark visited by Lewis & Clark.

You don’t have to be religious to ‘GET THE POINT’ sometimes. Jim Page, a dear friend forwards a lot of stuff to me. Most I cannot load through the cell so I can’t read it. Every once in a while I get a good one I can read. One that has a hidden message in it. Many of our conversations would be null or void if it wasn’t somehow discussing someone ELSE’s short comings or a neighbors ignorance.
Shoot, the RV park doesn’t escape my sharp eye as we walk i.e.
**** ‘Hey sweetheart that RV isn’t level, wonder how they live in it like that?’
****‘You would think they would have the courtesy not to park so close to their neighbor, their awnings almost touch.’
****‘That lady always rides her bike on the wrong side of the street.’
****‘Why would ANYONE buy an RV that color?’
****‘Why would they park right beside us, there are plenty of open areas?’
****‘That is a dumb looking man in that van, he just sits there all day.’
****‘She walks the dog, her husband is picking up the poop (or vice versa).’
Now I would not be so discourteous to do that all in one walk, but over the year she could probably write a book about what I say.
One guy that did not level real great. Come to find out had only one arm. Oh, and the dumb looking guy? Yeah, you guessed it. He is a dummy. Sherry tells me the lady travels alone since her husband passed away. Her daughter insists that she carry the dummy so it will not look like she is traveling alone. (Shirl came to our house a few years ago with an ugly guy in the car with her, I forget his name, but we all got a kick out of it.)
Now for the story Jim sent:
A young couple moved into a new neighborhoodThe next morning while they were eating breakfast,The young woman saw her neighbor hanging the wash outside.'That laundry is not very clean,' she said.'She doesn't know how to wash correctly.Perhaps she needs better laundry soap.'Her husband looked on, but remained silent.Every time her neighbor would hang her wash to dry,The young woman would make the same comments.About one month later, the woman was surprised to see aNice clean wash on the line and said to her husband:'Look, she has learned how to wash correctly.I wonder who taught her this.'The husband said, 'I got up early this morning andCleaned our windows.'And so it is with life. What we see when watching othersDepends on the purity of the window through which we look.Now I like that story because it is the GUY who brings light into the subject.
Bible scholars will remember the ‘mote and beam’ parable.
Thanks Jim, This was worth passing along.
Nite Shipslog
PS:
‘VINNIE!!!’ THAT WAS THE NAME OF Shirl’s dummy.(I think)
. Some things to think ponder:
*****No one ever says "It's only a game." when their team is winning.
**** I've reached the age where the happy hour is a nap.
*** Be careful reading the fine print. There's no way you're going to like it.
**The trouble with bucket seats is that not everybody has the same size bucket.
Posted by jack69 at 3:38 PM

Cute story...ha. I like the oatmeal cakes too. I eat them more than moon pie. But that's a pretty good meal - and RC and a moon pie...ha. Actually I rarely eat a moon pie but I do like them, and I will try the sundae. I know you can get the mini ones during Mardi Gras. Take care, no more moon pie talk, I promise. Sheila

Sorry you have a cold too! The bug is going around every where....

Guess you put me in my place. Some men are observant. Doesn't it just drive you crazy when something isn't level? lol

Old Vinnie is up in the Parham's attic. They did get him a new set of clothes. He has had
jobs house sitting for people when they go on
vacation. Vinnie protected our Guest House but Deany would not stay there he looked so real
I took Vinnie home. It must have looked funny me caring Vinnie taller that I am across the lawns taking him home. Remember when I brought him to see you and the Hardy Gang I said I am not riding back to Charlotte with Vinnie in the front seat. You put him in the back fasten his seat and away I went. Good entry. We are all
to quick to judge.

now why didnt i think of getting a Vinnie? i coulda got rid of my ex a long time ago. he was about as useful as a vinnie, just taking up space. lol
i like to mind my own business. My neighbors are safe from my scrutiny. in fact if they want to mind MY business they can gladly have it.

oh I liked that story with the laundry; good to remember; kind of like the splinter in someone's eye that you can't see because of the plank in your own eye

loved the picture of Pompey's Pillar! the way the picture looked, it looked like you were writing on it too; perhaps adding your name for historical significance :)

Somebody sent me that email last week. I think it was Terri that sent it to me. How true it is. I know we aren't supposed to judge others and I try not to but I think we all do it to some degree without realizing it as such.
I bet Shirl had a blast with Vinnie and probably felt safer on the road with Vinnie riding along.