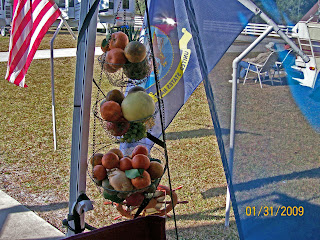 We are volunteering to help cover the porch of a parsonage at Lake Panosofkee. So far it has been great, we have been paid in Fresth fruit. I took a couple pictures. 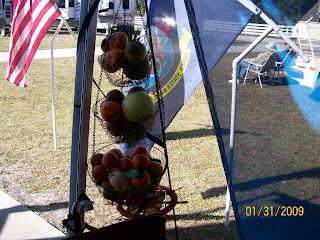 The above is the outside hanging basdkets the below is a close up of some of the fruit. The rusty orange is a juice orange the 'Hamlin' it is so juicy a dozen makes a quart of juice. Delicious! 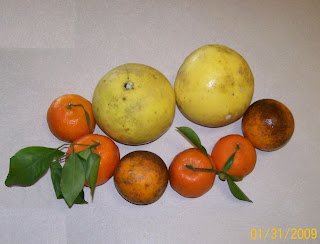 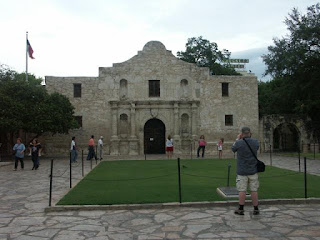 This is the famous Alamo, Remember the Alamo!/ Remember 9/11 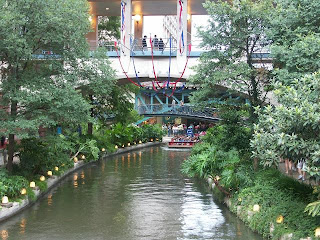 This is a scene from the famous river walk, a very relaxing walk by the river, lived with shops, we know it is a tourist trap, but we got some good food there and enjoyed the barge ride. It is a great place to visit, but not where Sherry wants to live.

Well I am among half of the USA citizens who desires to live someplace else. The only thing is I (we) do it. That is the latest pole. Fifty percent of our citizens want to live someplace else. Want to know something else? Over 25% of them want to live close to Shelly Marie and Big Bull. Us Americans love the Alamo!
My girl thinks San Anton is the most beautiful place we have visited. We love the river walk of course, all us tourists do. I have always wondered, do the locals ever just go and sit at one of the tables to watch us tourists?
Traveling is in our blood, but we know we cannot always do that. WE are noticing limits now as we get older. It would be nice to travel until you are ready to pass on, then head back to the home pastures to be laid to rest. That is a fantasy.
I should have my latest book in hand within two weeks. It should be on sale now through Amazon. It is called Rags. I will put it on sale here at $11 including shipping.
I started a book of short stories called, “Tobie’s Tales”.


I have set it aside to write one for the seniors who are approaching retirement home status. I have learned a lot. The main thing I have learned is that it is EXPENSIVE with a capitol E +. I am toying with the idea of trying to contact 15 seniors who want to form some type of consortium and build a nursing home. I have the land (3 acres) left (I think). I will explain the I think.


About 2 years ago a Tower company approached me about building a tower on our remaining land. They would pay us $500 a month or 10% of the profits. It sounded good to me. I signed a 99, that is 99 year lease. They gave me $10 to seal the deal. The $500 would start as soon as the tower was finished. I haven’t heard from them since. I have written, nearly said bad words etc. I read the contract, they have until this March to start the tower, it is not started yet. So If I have the land, I think I will see what we can do about that. It should be fun. If we can do it. The tower folks had a slick salesman, sounded like my signature was all that was holding up the tower. Hahahahaha on me and gullibility!
Nite Shipslog
PS:
MISSISSIPPI . . . The young man from Mississippi came running into the store and said to his buddy: "Bubba, somebody just stole your pickup truck from the parking lot!"
Bubba replied: "Did you see who it was?"
The young man answered: "I couldn't tell, but I got his license number."
(That is how I feel about the cell tower contract, very dumb!)
Posted by jack69 at 1:27 PM

I remember the Alamo and Riverwalk well. The only time we went there was when relatives were visiting. I think I went 3 times in the 4 years we lived there. Have a great day, Sheila

It is hard to believe you signed this deal.
We can go to City Council and tell them not to
approve it or to the people and tell them they
don't want it in their neighborhood. If I had not signed the contract you drew up in blood on Girl Scouts Honor I would be good and not stir up trouble when I moved back to Belmont I could help. I have been good so far but it is hard to keep my mouth shut. The City does not inforce any of their codes.

you've been busy to have Rags almost ready to be available to buy!! count me in when you get it; you still have my address?

I haven't sent that info yet for your seniors book; I keep remembering it but forget to write it, what does that say about my memory and getting old??

never been to Texas; maybe one day; I hear parts of it are very nice

You are really at work writing. I never been to texas but, I've seen that river walk in a lot of movies and TV shows.

We never go to the Alamo or the river walk anymore. I did live very near all the Missions when I lived in San Antonio and drive near them often now. Shelly Marie's home looks very arid now days. We need some rain. Count me in on Rags.

Well now Jack, It is reALY A GOOD THING THAT YOU BOTH LOVE TO TRAVEL. Joe and I were just talking last night about the few vacations we have actually gone somewhere, and we both cemmented that once we said maybe we better head for home, we went. Loved going but loved home more. The good part is being able to see other parts of the country through your blog AND OTHER ONES. Lucy

We went to the Almo and river walk once while visiting Sheila I think we made it to San Antonio 3 times while she lived there youngest son still lives there we might make it back again.Lol. take care jean

If I were to ever live somewhere other than Kentucky...which I doubt I ever will...it would be either Tennessee or Florida...I love Tenn. and have been there several times...never been to Florida but from the pics I have seen it is beautiful!