I am toooo OLD 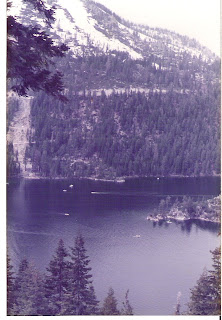 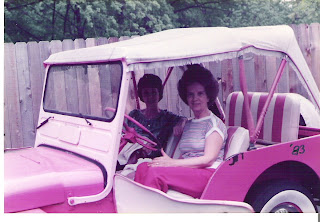 Sherry and Colette in Elvis's famous Pink Jeep!
Todays confused entry!
Does your family have a traditional meal on New Year’s day?(I noted Shiela does, see her blog) Sherry’s family did, I don’t think our family did, I just e-mailed Shirl to ask. If it was at our home, I missed it or the significance of it. Anyway today we had some green leafy veggies and black-eyed peas. I don’t care for hog jawls which was traditional in Sherry’s family, we did not have them.
Got Shirl’s answer. Negative, we just ate well, and we did. Mama was the best cook in the world bar none. Could make a meal out of practically nothing, and it would be delicious.

Ever been torn, family wise? I always thought, watching our sons as they grew up, that their lives would be like ours, And like that of our parents. Joined to a spouse forever. As we grow up we are taught by actions or verbally, some things you do and some things you do not do. When you see society changing, your mind does not compute. WE were always taught, you get married and then engage in sex, and then have children. Now I see the world (OUR FAMILY) going against my ‘biblical’ principals I want to cry.
Mostly because of confusion within my own mind. I hate the word divorce. IT has invaded our peaceful lives 4 times. That is still hard for me to understand.

Our very good friend Juanita said something the other evening that has stuck with me. She gave advice to people from her own experience. I love this man, and I will do anything to keep him. What ever it takes.
I realized that is what has made our life together stay together. During a time of crisis, one of us said that exact thing. Not always the same one of us, but one of us kept a straight head.
Now don’t get me wrong, I do not think two people should stay together when one is abusive and will not stop, or when the marriage is just naturally destined for failure. I am talking about when you love each other, but natural mistakes happen, or there is a misunderstanding. Someone has to give to make a marriage work.
Don’t misunderstand, ours has not been a storybook marriage, but it has been danged close. I had hoped the same for the whole family. I have settled in my mind, we all have different mental make-ups. A lot is society, giving the idea, try marriage, if it doesn’t work then back out. That has graduated to the idea of living together to see if you are compatible. There are times when I think I wish Sherry would have been agreeable to that, but then I don’t know. It is all too confusing for an old man.
460 words and I ain’t said what I started out to say.
Nite Shipslog
PS:
(Something I wish my grand kids could say)

Why some sports figures do not need a job involving their mouth!

Chicago Cubs outfielder Andre Dawson on being a role model: "I wan' all dem kids to do what I do, to look up to me. I wan' all the kids to copulate me.

"New Orleans Saint RB George Rogers when asked about the upcoming season: "I want to rush for 1,000 or 1,500 yards, whichever comes first."
And, upon hearing Joe Jacobi of the 'Skins say: "I'd run over my own mother to win the Super Bowl," -- Matt Millen of the Raiders said: "To win, I'd run over Joe's Mom, too."
Torrin Polk, University of Houston receiver, on his coach, John Jenkins: "He treats us like men. He lets us wear earrings."
Posted by jack69 at 3:04 PM

Well Well Well I am out of words. If you can believe that. I have talk with people who eats
that meal on New Years and has not had good luck. I think Jim's mother had that meal but
there again I don't remember. I don't guess
it was custom if I don't remember. Sometime my
mind takes a vacation but it does return. It's off today.

Happy New Year! My family has black eyed peas in some form. This year we had something called Hoppin John. So good! I used the ham bone from New Years Eve and added the peas and seasonings and put it over rice. On the other subject, I feel blessed. My 2 daughters are still married after 20-22 years to wonderful men. It might just be coincidence, but, my sons in law had parents that were still together, as did my daughters. I think having an example of parents that work out their differences is helpful. My younger daughter told me recently that she never thought she would love her husband more than the day she married him, but that every day just increases that love. Am I lucky or what!! Lindie

you said a mouthfull there captain jack!
my two oldest married the first loves of their life.As a matter fo fact they did combine habitats before marriage. lol
my third oldest has remained celibate waiting, wisely for God to send her a dream come true.then there is the one engaged to potty mouth living with her future father in law Mr. potty mouth senior.
GO FIGURE! lol
by the way. we had pizza for new years, and leftover turkey soup . the aunties had blackeyed peas , collard greens and ham hocks I am sure. that stands for luck , money and health. I just trust in God , that works for me. lol

Jack you are not old. Wait a few years. We never had a tradition that I liked on New Years as far as food. If we could afford it my dad loved oysters in ANY FORM INCLUDING RAW, "YUCK" but we would have oyster stew on New Years Eve. I ate the milky stew and gaVE DAD ANY OYSTERS THAT POPPED OUT. Lucy

my mom always made sauerkraut and porkchops for New Year's Day; we now eat whatever we decide so that custom kind of died out in our house (mainly because my hubby doesn't like porkchops).

I totally agree with you Jack about divorce; people need to stick together unless there is abuse; people need to go into a marriage with the attitude that through thick and thin they will stay together, no ands, ifs, buts. And I may have mentioned this before, but I think I know why God hates divorce; it is what divorce does to people; tears them apart; tears the love they once had for each other into sometimes hate where they can't stay in the same room with each other; I just don't get that. We have our moments (okay years) but me/hubby decided long ago we were going to stick together and make it work and keep working on it until we made it work and that with the grace of the Lord, we keep together.

Our New Years meal was what ever my Mom could find to cook for all of us. She was a great cook too.
Well I was taught the same things you were but somewhere along the line I had a mind of my own. I have no regrets about being a single parent because I do have a wonderful daughter and my parents didn't disown me like some parents have their children. Gary is divorced from his first marriage, they simply got married too young and it didn't work out, they were still kids themselves.
We have a good marriage and I'm thankful for that but I don't think there is any such thing as a PERFECT marriage or PERFECT family. It does take alot of give and take on each spouses part and alot of love for each other.

P.S. You worry too much about your word count, lol.

Nope...no traditional New Years meal here...didn't grow up with one either..like Mom said...Grandma just cooked whatever was available and it was always yummy..as is my mamas cookin.

I've been married 13...going on 14 years...in this day and time we must be doing something right...cause it seems now a days people give up so easily and call it quits... we've had our share of ups and downs but somehow we make it through...and always end an arguement with "I love you"... it might be hours afterwards but we do..LOL