Do you Make you bed? 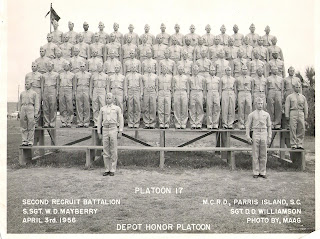 This is my boot camp graduation picture. So I did graduate from something. I am the one in uniform, I also held the position of High shooter. I am 8th from the left front row. I told mama it was because I was important, but they put the smallest guys up front.

I remember when making up a bed was a terrible chore. Now it is not so bad, with the heavy bed spreads that fit. Now days some folks do not make their beds. I know Paula in Texas does because she spilled the beans once on her blog. We normally do here. But the last two days have been an exception, I have been in and out it. It is nice to be able to do that. I am not what you call really sick, just washed out as my mama used to say, what ever that means.
Now in the USMC especially, there is a rule. You make your rack (bed) first thing. Top or bottom bunks were no big deal, just time consuming. And when I tried you could bounce a silver dollar on mine. AT Camp Geiger we marched to chow every meal and ‘straggled back to the barracks’. The last thing the sergeant would do in the mornings was tour the barracks, then call us to attention and march us to chow. Once I decided to change the Corps policy. I did not make my rack. After the Sgt. Called the Co. to attention he announced, “Darnell, fall out!”
I said, “What’s the problem Sergeant?”
“You did not make your rack.”
“I’ll just mess it up again tonight.”
“Yeah boy, and If I let you go eat, you will just get hungry again.”
They marched off without me. If you try hard you can understand Marine Corps logic.
Sometimes I still wonder why I stayed an E-3 for eight years. Oh well, sometimes I am hard to understand. LOL
Well it is off to bed again.
Nite Shipslog
PS:

Will Rogers died in a plane crash, with his friend Wylie Post, in 1935; he was widely known and a beloved figure of his time -- as a political sage and as "just a good ol' country boy." These are some of his"philosophies."
**The quickest way to double your money is to fold it and put itback in your pocket.
*** There are three kinds of men: The ones that learn by reading. Thefew who learn by observation. The rest of them have to pee on the electric fenceand find out for themselves.

*** If you're riding' ahead of the herd, take a look back every nowand then to make sure it's still there.

***Lettin' the cat outta the bag is a whole lot easier'n puttin' itback.

**** After eating an entire bull, a mountain lion felt so good hestarted roaring. He kept it up until a hunter came along and shot him.
Themoral: When you're full of bull, keep your mouth shut
Posted by jack69 at 4:55 PM

My bed covers are so heavy they don't move. When I get up they are still in place. So I just
spread them up. The Boys would say I am going to get right back in them why make them.
I don't line the decorative pillars up unless company is coming.

I have five brothers and some in the navy, marines and airforce.......I got so used to seeing my brother spit shine their shoes and being so immaculate with their rooms, etc. It certainly was not like that before they left for the service. LOL

I occasionally do not make my bed when I'm not feeling well but being brought up by a strict Italian mother and coming from a family of 12. Yes.......I made my bed every day. I also passed that strict rule onto my children, however, I don't believe one adheres to it. They are adults now and have been on their own for a while so they are no longer under my house rules! LOL

I remember Dad talking about making the bunks and they had to be perfect and spit shining his shoes for morning inspection. Dad said you learned to do it well because you had to do it over and over again until it was perfect. I don't know if he ever miss breakfast because of it or not I'll have to ask him.
Sometimes I make the bed and sometimes I don't. It's not made right now but it needs to be because Gary is rough on the covers when he's sleeping, tosses them every which way. Now if he falls asleep on the couch or in his recliner I don't have to worry about it. When I get up the covers are pretty much in the same place they were when I went to bed. I guess I'm just lazy, hahaha. Nobody sees it but us anyway unless Jacob stays all night and he's rougher on the covers than Gary is, they're in knots a few minutes after he goes to sleep.
I like the one about the men peeing on the electric fence, hahaha.
Well Jack I didn't know you were sick. I hope you are feeling better soon. I guess there's viruses and colds going around everywhere. Get well!

hoping you feel better soon!! when first married, we sort of made an "unofficial rule"; last out of bed makes the bed; I'm an early bird, my husband a night owl; I bet you know who has made more beds over our 28 years of marriage

get plenty of rest and drink lots of fluids :)

Ummm...I guess I will be honest and say...our bed is only made when company is coming over...most of the time...lol Unless we just feel like making it...but I look at it this way...we're just gonna mess it up again :)