Friends from the Frozen North! 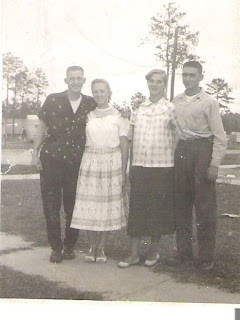 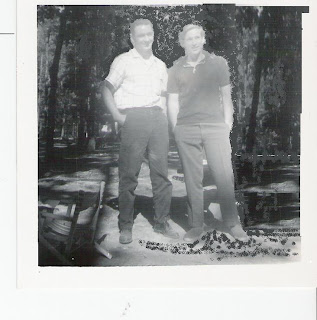 Bad picture, but Dal and me mid life. 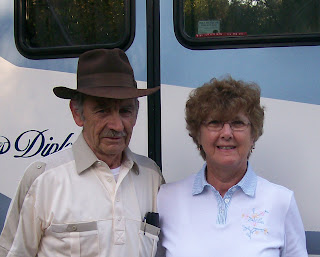 I met this guy called Dallas, in 1956. He was down for a visit from Red Lion, PA. We were both on vacation; fully government paid, at Pleasure, Island S.C. The time was filled with so many fun things to do we did not have much chance to really get acquainted. WE chatted some, but mostly we just stayed busy doing those many fun things. There was a Rifle range for all the practice you wanted. The many fun obstacle courses to run were unbelievable. There was free hand eye coordination training available. All in all the time was spent productively, relaxing in the sun.
I had never known anyone by that name, I didn’t know you could name a person after a town. I had never met anyone named San Antonio or Belmont. Why not San Diego or Kansas City? Anyway once the vacation was over we went back to our homes for a short spell. Both of us decided, at the urging of the government, to spend some time in and around Jacksonville, NC.
We renewed our acquaintance and were able to get to know each other much better. He thought his girl friend was better looking than mine, she was cute, but no way was she better looking than my Sherry. So we both decided to marry the girls and bring them to J’ville, NC. To prove it. We did that. The girls liked each other and we all got along wonderfully. It was a great friendship and it has lasted over fifty years.

Dal and Marion just left today. They came up to buy our lunch. They are just returning from a cruise out of Tampa. They will be in Florida for a day or so more then back to Pennsylvania . It is great to see them and talk of old times. Funny how that short friendship, about two years all totaled, forged something that has lasted. Both of our marriages have lasted over fifty years now, so there is a safe bet that the girls are not going to ditch us. It was good to see Dal, but don’t mention it to him, he is looking older. On the other hand Marion still looks nearly the same, I am not kidding. LOL! MARION WOULD NOT TELL ME HER SECRET!!!!
Night Shipslog
PS: (Correction, that was Parris Island vs Pleasure Island, my mistake.)

****The democracy will cease to exist when you take away from those who are willing to work and give to those who would not. Thomas Jefferson

*****It is incumbent on every generation to pay its own debts as it goes. A principle which if acted on would save one-half the wars of the world. Thomas Jefferson

***** I predict future happiness for Americans if they can prevent the government from wasting the labors of the people under the pretense of taking care of them. Thomas Jefferson

**** My reading of history convinces me that most bad government results from too much government. Thomas Jefferson

Glad you had a good time with your friends.
I bet they loved the warn weather in Fl.
We have had good weather again, but turning cold
tomorrow. Aunt Dimmie always wore that bonnet
at night. I don't know if her head was cold are she was protecting her hair do. She sure was old fashion. I Wonder where that beautiful
spinning wheel is today. I bet I know.

So glad that you have such dear friends and you had a great time. I love the pictures. I noticed that picture that Miss Shirl was talking about and it was Great.

Isn't it wonderful to make good friends and keep them through out your life? Yep it looks like both of you guys have marriages that are going to last. Wouldn't want you to have to sleep on top of the motor home.

so funny with you thinking people couldn't be named after places, we have Dakota now as a popular name, I've heard Montana for someone's first name,etc.

neat to have a friendship going on that long; and even neater that all like each other; not just men as friends or the wives, but all; glad you had a chance to hook up when they were in your neck of the woods

I like the way you told the story of how you met your friends on a pleasurable vacation. Bet it didn't seem like one at the time. It's great that you have all remained friends for so many years and were able to enjoy each others company today talking about old times.