Who knows about the PAST? 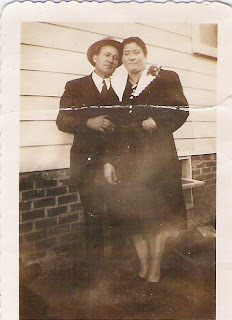 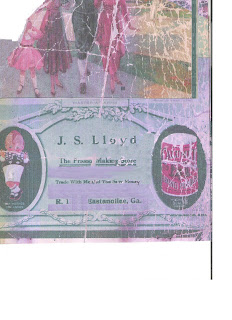 This is all that is left of a memory that I wish I would have asked Mama about. Shirl saved this ragged piece of a calendar advertising her dad's store. I can remember bits and pieces but nothing substantial. I don't even know where it was, other than in or around Toccoa, Georgia in the late 1800's.
I just feel ‘so unneccessary’ is another of mama’s many sayings, if she was not feeling up to par, and that had to be less than five times in my whole life. Mama was never sick, I think she felt like she did not have time. I can remember dad have a cold, but I cannot remember mama being ‘down sick’. What a woman my mama was.
She had insight into people and especially children. I always knew Dad prayed and stayed in touch with the Lord, but somehow I knew mama had an open line to him. Do you remember the song “If I could hear my Mother pray Again’? It was used at a lot of funerals, caused a lot of weeping and wailing from husbands and children that knew their mama was the one who held them up in prayer. Some folks don’t believe in prayer, and that is okay, but I sorta enjoy believing in it. It gives hope in a world gone crazy.
I put another twist to the song the other day I was thinking, I would like to hear my daddy preach again. Dad was known as an ‘Old Testament’ preacher. He loved the stories from the OT, and made them come alive. Then brought them into the present time to make them useful. Dad loved Optomists, Caleb and Joshua were his very favorites. Seems like I have said that before. If so forgive me and blame it on a sickly guy. I said sickly not sick. LOL.
I would urge you that still have Older parents and grandparents, who still have presence of mind to think of all the things you might want to know about their past, and ask them. Funny I never thought of asking, they were going to be here forever.
Their favorite meals as kids?
What was the longest trip they ever took? Who was their first friend? Do they know what happened to them?
When did they first eat Ice Cream? Was it bought or homemade?
How much did they earn on their first job? What was it?
Those are a little light and my mind want go much deeper but one day we all will wonder about the past, I do.
Thanks for coming by the log.
Nite Shipslog,
PS:
WHAT IS A GRANDPARENT? (Taken from papers written by a class of 8-year-olds)*They wear glasses and funny underwear.

**They can take their teeth and gums out.

***Grandparents don't have to be smart.

You have fond memories! I guess we all wish we had saved more photos or more sentimental things from the past. But, what you have saved in your memory bank is priceless!

Jack, I am with you on those types of memories. They can realkly take a person back, especially at my age. Lucyu

Great entry Jack. I got into Genealogy years ago, and I love seeing an old picture or item from my ancestors, especially ones I didn't know or know well. Have a great day. I hope it's not raining on you today, Sheila

You are right I don't remember Mother ever being
sick. I love to see the name LLoyd, some of
the people thought one L was dropped. Mother always wore navy blue or black dress with a white lace collar. But if she was in the Kitchen she had an apron on and could put a meal on the table in 15 min. It was not just one
item. The whole thing including biscuts. How
about egg custard or fried apple pies. I do remember one time Dad telling me to be quiet
because Mother had a headache. I was in the first grade. I think she was going through the change.

I agree I so wish I had ask my Mama quetions. They didn't seem inportant at that time. Your Mama sounds wonderful. I remember my Mama makeing homemade rootbeer one time and the bottles started blowing up. She had them stored outside beside the house in something like a pie safe. Guess the Texas heat was just too much. wish I could remember what kind of caps she put on.

Really great entry! I would have loved to hear your father preach! I love the old testment stories!

I bet it would be neat to hear your dad preach; seems like lots of preachers enjoy the New Testament and rightly so, but the Old Testament has just has many wonderful lessons in it as well!

so true about asking parents/grandparents those questions; I know there are things I wish I had thought to ask my mom.

Just stopped in to say that I hope you are feeling better. Lucy

I've never heard of that song before...gonna have to look it up on Youtube...

I love listening to loved ones talk about the past...and how different things were back then...

I've never heard that song either. Mom and Dad were always good about telling us things as we were growing up about how they lived when they were growing up. But, over the years I've forgotten some of the things they told us. Dad loves to talk about old times, so he's still sharing things with us. After Mom passed away my Mom's youngest sister dug up all their family history she could find and talked to the few of the older generation who were still living. Dad, myself and all my siblings were given a copy of it the first Christmas after Mom passed away. What a treasure it is! My entry on Christmas titled The Christmas Box the story of my Mom singing on the day her Mother passed away when Mom was only 6 years old was taken from the pages my Aunt had written. The night of my Mom's funeral Dad started telling stories about old times and his and Mom's life together and my sister in law wrote everything he said down. A copy of Dad's memories were given to all of us our first Christmas without Mom. In the weeks after Mom passed away my sister in law and her family gathered older pictures from whatever source they could find and presented all of us with what I guess you would call a poster collage, some of the pictures are very old of my ancestors and some of the pictures are of us growing up. When my Grandad passed away in January 1999 one of my sister in laws took pictures the day of his funeral of my Mom, her sister's and their sister in law. When we got back to Mom and Dad's she took family pictures of all of us. At the time I didn't say anything but to be honest I didn't feel like it was the proper time to be taking pictures. How wrong I was when we suddenly lost Mom two months later. We treasure that family picture so much, the last picture of all of us together. She also took a picture of Mom and Dad standing in front of the french doors. When the picture was developed I looked at it in awe, above Mom and Dad's head on the curtains there is an image of a large heart. When she had copies of those pictures made for all of us we thanked her for capturing those memories for us. What precious memories they are! Terri takes pictures every chance she gets, she will never regret being able to look back on the memories she captured.