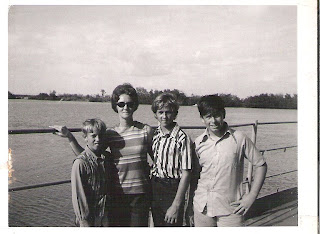 The above picture of Sherry and the boys + a friend, near the spot On GITMO BAY where Columbus once landed. 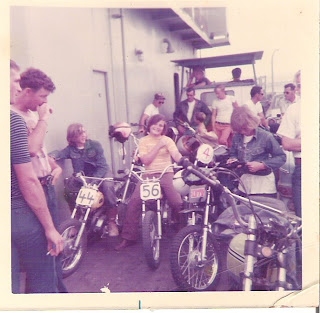 The boys on the ferry in GITMO on their way to a moto cross race. 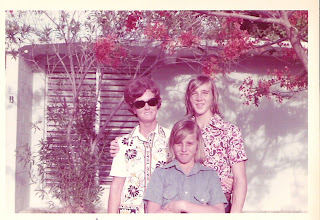 Sherry, Mark & Jack outside our house in GITMO. These years are rated by our family as the best years of our lives as a family. 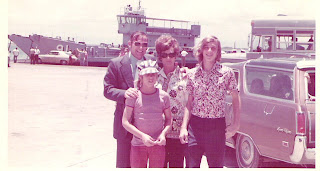 The family at Ferry landing GITMO


This is just to correct another misconception I see going around. Guantanamo Bay is not closing. GITMO BAY as it is affectionately called by Sailors and Marines over the world, is a forty square mile Naval Base. Housed on the base is the FTG (Fleet training Group), NSD (Naval Supply Depot), NAS (Naval Air Station) and Camp Buckley (USMC CAMP). There was a prison on or near Camp Buckley to house Cuban & Haitians awaiting transport to their countries or the USA. It was closed years ago by a judge who deemed it unconstitutional.
That prison was reopened and expanded and upgraded to hold Terrorists. I think this was an unwise move and it has become a thorn in our sides. Our new President plans to close the prison facility at GITMO, that is my understanding, I concur. There are some great prisons in Iraq, put 'em there.
I visited GITMO on a ship a few times, and Sherry & I lived there for 3 ½ years. I am sure the residents of Gitmo will be thrilled for the prison to be closed so that their lives can get back to normal. They have been over ridden by politicians, the press and do-gooders for years now.
GITMO is primarily a training facility which allows near perfect weather to train and shake down a ship and crew. It is no picnic for the ships crew, and a dreaded six weeks. The only break is liberty in Jamaica and Haiti for the crew. They get liberty on GITMO but most don’t consider that great liberty.
Anyway I just wanted to clear the air for those that do not know, the Base is not closing, just the prison.
I have said it here on this blog, I did not vote for our new President, but I certainly wish him well and hope he is the best president we have ever had. I was proud to hear him say he supports normalizing relations with Cuba, I certainly agree with that also.
Thanks for coming this way,
Nite Shipslog
PS:
GROWING OLD..
Sixth ~ I don't know how I got over the hill without getting to thetop.

Seventh ~ One of the many things no one tells you about aging is that it is such a nice change from being young.
Eighth ~ One must wait until evening to see how splendid the day has been.

Ninth ~ Being young is beautiful, but being old is comfortable.
Tenth ~ Long ago when men cursed and beat the ground with sticks, itwas called witchcraft. Today it's called golf

And finally ~ If you don't learn to laugh at trouble, you won't have anything to laugh at when you are old.
Posted by jack69 at 4:02 PM

No Jack you didn't lie we all just got a little confused or I did back in October when we all thought it was your birthday. Now be a good feller and quit getting on Sherry's last nerve cause we want ya around to celebrate your 100th.

Jack I am sorry you are getting things to confused. Your birthday is the 17th and Dad's is the 14th. Why do you thing you are a l06 years old. I can understand you are getting on
Sherry's last nerve if you think you are 106.
Man you are decrepited. Just pretend you are
70 and keep on going. There is a differents in
1903 abd 1939. You are confusing Debbie.
Just say you were both in Januray.

Both of who were born in January? You were born in March I think. Wasn't me. Whose is confused? I am 106 in a couple days. huh?

Debbie is not thew only one confused. My blog has been doing everything but co-operating today so I will just saY hAPPY bIRTHDAT jOE ON THE 16TH AND jACK ON THE 17TH TO COVER ALL BASES IN CASE I destroy my computer tonight. Lucy

I think I'm the one who confused everybody way back in October when I wished you Happy Birthday then. I did know that your 70th birthday is January 17th because I remembered back in all the confusion in October you writing in your journal your birthday was in January so to make sure I got the right day I asked Shirl last week. I also remembered that January 14th was a special date of rememberance of your Dad but once again I had it confused with another date of rememberance and I apologize.
So yes Jack I know that you will be 70 on January 17th and I hope I haven't confused anyone else with this comment.

Well whenever your birthday is I hope it was or will be a good one. Man I can understand Sherry's nerves. A man around the house all time can get on a woman's nerves.

Just wait one ding dang minute there !
You are not allowed to be senile, not yet.
Happy birthday in advance.I knew your dad was the one on the 14 like my A.J's.
I suppose you were a belated present for him! lol
Please dear Sherry, don't do him in yet!!!
although I am sure you have the patience of an angel despite what Jack says.
Jack is one of those endearing men who never really grow up.
He is like the most charming son or brother who can always switch from sage to smartaleck and keeps us on our toes!
Would be a dull world without him. Thank you and Shirl for sharing some of his mischievness with us.Much love to you all!

70 is a great milestone to get to; please behave so Sherry allows you to reach it!

and I'm starting to cut down on my computer time so in case I don't get back to wish you one, HAPPY BIRTHDAY!!!

Happy Birthday yesterday to your Daddy up in Heaven...yesterday was also my cousins birthday!

Happy Birthday to you too on the 17th...thought I better tell ya before I forget :)

Poor Sherry..I know how it feels when your honey gets on your nerves...lol Jack behave :)~