WE have Company Coming 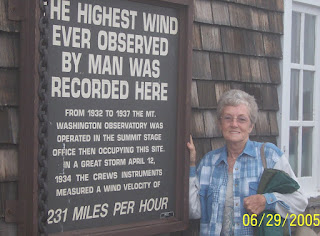 Here is Sherry atop Mt. Washington in the presidential range. We drove up on this occasion. 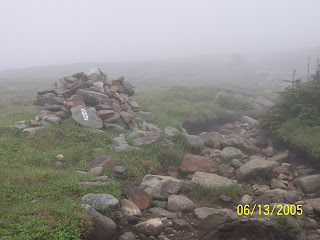 These two pictures are the last mountain climbed in New Hampshire. Mt. Moosilauki. The rocks you see are the actual Appalachian Trail. The white blaze on the rock tells you it is the trail. 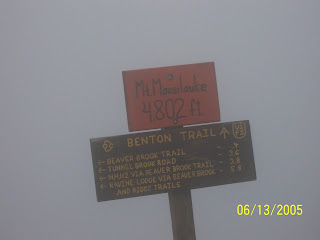 The peak was socked in and the wind was horrendous.
Now to today's Super duper entry.......

We have a son coming down to see us for a day or so. Jack is coming down to watch me turn 70. He is on the road as I type. I just hate it that he is coming to Florida and it is COLD for Florida. At least it is not in the teens or single digits.
Jack is the one who always laughed at the Florida Automobile tags when they all screamed Florida, THE SUNSHINE STATE. His take was always, yeah the liquid sunshine state. He spent a couple years as a High School Student, in Key West, when we lived there.
Jack has tried many jobs, a lot like his dad. He has finally found a nitch (I think) in the courier business. He is with DASH Couriers.
We are looking forward to the time together.
We spent a few hours last night looking at New Hampshire. Trying to get an attack plan for the coming summer. It would be good to complete a hike through the state of New Hampshire. We will need to hike the Mountain range called the Whites, and the presidential range. We get excited thinking about it.
I assume the other son, Mark, is at the beach. He goes every year with his buddy and cousin Steve to some golf tournament. Man I can’t imagine playing golf in the cold weather. Of course it is hard for me to imagine playing golf.
WE are a close yet distant family. Our theory has always been, and has been taken up by the boys, ‘NO NEWS IS GOOD NEWS’. Ah, Sherry talks to them ever couple weeks. I guess I might to, if I could hear. WE have a wonderful family, and when one is in trouble and needs someone, we are all there.
Stay Warm, thanks for coming by the log,

Nite Shipslog
PS:
Why Some sports figures don’t need to get a job:

Football commentator and former player Joe Theismann in 1996: "Nobody in football should be called a genius. A genius is a guy like Norman Einstein.
"Senior basketball player at the University of Pittsburgh : "I'm going to graduate on time, no matter how long it takes." (Now that is beautiful!)

Bill Peterson, a Florida State football coach: "You guys line up alphabetically by height."And, "You guys pair up in groups of three, then line up in a circle.

"Boxing promoter Dan Duva on Mike Tyson hooking up again with promoter Don King: "Why would anyone expect him to come out smarter? He went to prison for three years, not Princeton."
Posted by jack69 at 12:19 PM

Have a great time with your son there. As you know, the Seattle area is known for rain. But the time we were there, the summers were great. It rarely rained during the summer and temps usually in the 70's. Take care, Sheila

It's up to a balmy 19 degrees here now after snow this am. Florida sounds good even if it is "cool". I love the coastline of New Hampshire on up into Maine. Such cute seaside bungalows, all with their own names and not numbers! Lindie

Happy Birthday Jack!
so happy ofr you and Sherry getting to spend time with your son. Please take lots of pictures and have loads of fun.

I can't believe you are turning the big 70. Did I say 70. Maybe I had spell it S E V E N T Y
That doesn't look any better because it makes
me older. Hope you will be able to get out of bed without aches and pains.

I know you will have a good time with JJ he is a happy person. I bet Sherry is cooking his
favorite meal. Hope you are having a big party.
You don't turn 70 by one time and then there
the years go. Trust me.

Just talked with Louise and she give you a BIG HAPPY BIRTHDAY GREETING with HUGS AND KISSES.

I'm happy for you that your son Jack will be there to celebrate your 70th. I'm sure ya'll will have a wonderful time even if it is a litte chilly in Florida. Just in case you celebrate too much and don't write an entry tomorrow, Happy Birthday!
Nope I ain't laughing cause Shirl is rubbing it in, hahaha. Well maybe a little giggle, lol.
Happy Birthday Jack! Wishing you many more!

Well, Happy 70th Birthday and I hope you and your son have a great family reunion! It's going to be around 14 in the morning here... so I hpe it don't get that cold for you guys.

I know you and Sherry will enjoy your son's visit. That first picture is interesting. That is some high wind recorded there.

Hope you have a wonderful 70th Birthday so glad to hear your son is coming down to share it with you!!

We too have a close but distant family...most of us live in or around 30 minutes of each other..with only 2 families living 3 hours away...by distant I mean we aren't up in each others business....lol Like you said if one needs something...we are ALL there...Jack I think you and I both are blessed with wonderful families :)

Enjoy the time with your son...and Happy Birthday again!!!