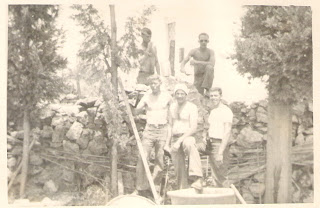 Volunteer working party at a Orphanage in Athen's Greece. I am front/center those parallel lines along the rock wall, are actually water hoses used for water supply to the Orphanage and surrounded houses. 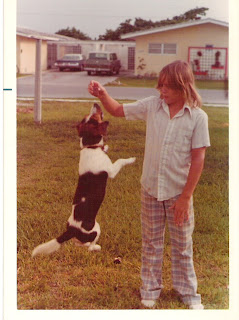 Mark and his dog in Key West, we were trying to remember whatg happened to that dog. 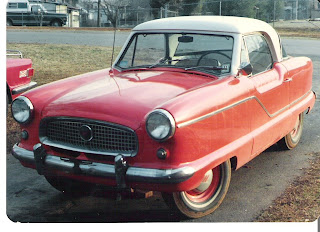 Don’t you just love politics. No one, I mean no one can be themselves. Everyword must be guarded.Not that a flub is a big deal, but let the media get a hold of it and WOW! There will be fall out for awhile now about the statement Mrs. Biden made the He had been offered State or Vice he chose Vice. Now it has been played that it was a slap at Hillary. Immediately there was a statement from the Presidents spokesman, “Joe Biden was offered the Vice Presidency, one offer, that is all.” Politics for years has been weird.
Tis cold in Florida. Our friend Glenda from Okee says it is supposed to be in the 20’s there. They are picking their oranges. I hope the STATE’S fruit is not ruined.
I just went out and disconnected the water from the Motor home just in case the weather man is telling the truth, 22? Here? Unheard of (by me).
We are at the State Park in Fruitland Park, Florida. They rent canoes here and we were hoping to get one and do a little fishing and alligator hunting.
Back when I carried a boat with us all the time, we were fishing in Okeechobee. Fishing was slow and I saw a small opening just wide enough for the boat, into a cove. I pulled in. In doing so I disturbed a giant Alligator (13-14 ft.) he jumped into the water and went under the boat. Well, since Sherry did not yell, I could not act afraid, but I wet the hook for a minute, then said, “It doesn’t look like they are biting here.” I got out of there.
Later I said to my love, I am so proud of you, you did not scream, jump yell or anything when that big guy jumped in. She said she was too scared to do anything. (She just said that to make me feel good, ‘cause I was scared. LOL).
We have never had a confrontation with gators. They have been around the pier, near our boats, close enough to reach with a paddle at times but they have never bothered us. They know my wife carries a knife! Once when we were finishing clearing the water near the pier, we looked back in and a medium size guy about 8’ was right where we had stood a few minutes before. That will make you think.
Thanks for coming by.
Nite Shipslog
PS:
Why some Sports Figures Don’t need to get a Job:

*****Stu Grimson, Chicago Blackhawks left wing, explaining why he keeps a color photo of himself above his locker: "That's so when I forget how to spell my name, I can still find my clothes.

*****"Lou Duva, veteran boxing trainer, on the Spartan training regime of heavyweight Andrew Golota: "He's a guy who gets up at six o'clock in the morning regardless of what time it is."
*****Chuck Nevitt, North Carolina State basketball player, explaining to Coach Jim Valvano why he appeared nervous at practice: "My sister's expecting a baby, and I don't know if I'm going to be an uncle or an aunt." (I wonder if his IQ ever hit room temperature in January?)
******Frank Layden, Utah Jazz president, on a former player: "I told him, 'Son, what is it with you? Is it ignorance or apathy?' He said, "Coach, I don't know and I don't care."

*****Shelby Metcalf, basketball coach at Texas A&M, recounting what he told a player who received four F's and one D: "Son, looks to me like you're spending too much time on one subject." (Probably one of the best one-liners ever, but completely wasted on the player in question.)
Posted by jack69 at 11:50 AM

oh my gosh, I would have been like Sherry with that alligator! I'm sure she was praying a plenty though!

my husband grew up in the Sanford area of Florida; he has shared lots of stories of alligators

22 does seem cold! bundle up for sure if it happens!

who is Biden? lol
alligator story more exciting to me
Sherry sure is brave I wouldnt even have got in the boat there's places i would never let a man drive me into, and a cave with gators is definetly one of them.
Please tell Shirl I said hello

I think I told you we had alligator in Atlanta
at some function. It was tough but had to try
it. There were stations all over the restaurant
that you could try different things. They should just be left in the water. I will stay clear of them dead or alive.

That is a cute little car.

Hey Jack we came close to 70 yesterday but when I got up it was 29 and dropping this morning. I will take snow, cold hot or anything over ALLIGATORS. I am chicken Lucy

I would have been wetting more than a hook if I ever saw a gator. That would have scared the crap out of me too.