Thinking of the spring and summer 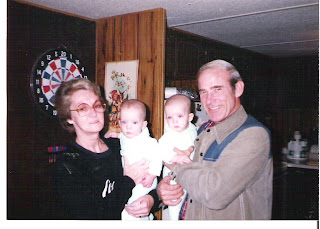 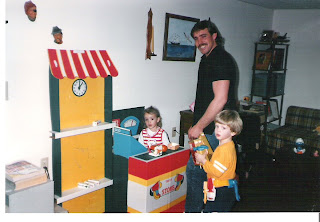 Mark waiting to purchase something from Reece at her store, Christopher her cousin in check out line. 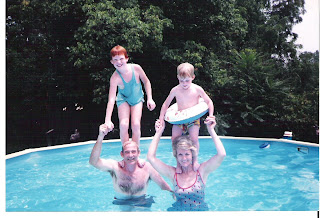 Outdoor pool at Elmer/Lennie's. Corey on my shoulders and Ben on Grandma's. We could not do that now hahaha! 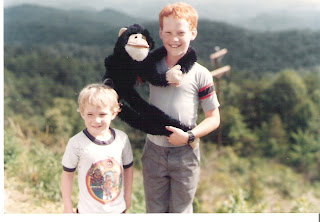 Benjamin, George and Corey on a trip to the mountains of North CArolina. 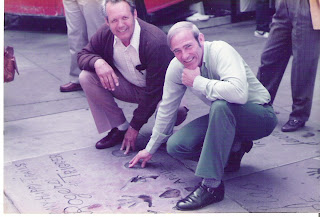 Sonny and I in Hollywood at our favorite actors square and prints, Trigger and Roy Rogers.

Hey I finished 'Cracker's Mule' by Billy Moore last night. A great spoof about a boy during the 1950's. Funny, Rags is also set in the fifties. Cracker being his nick name since he was in Opp, Ala with his grandparents, but was from Florida. Florida cowboys are called Crackers. It is published by JuneBug books. You can find it on Amazon.

Well it is a new year, and we are facing the questions of which adventures do we want to pursue. We both want to go to the North East and hike some. Sherry is not sure if she wants to carry a back pack. I am not sure if I want to carry a tent. I want to sleep on the ground under the stars and eat only p-nut butter crackers. That way the pack is much lighter. That is up in the air. The one thing I know is we want to go to New England and try out the recommended Lobster houses (do you have one to suggest?). And go back to Nunans in Kennebunkport. We also must visit Judy and see her new apartment at her Son’s house. They built her a nice place over the garage after her Al died.
We also want a family thing again. Since taking the cruise, we would love to take the family on a four day cruise. But the logistics are pretty confusing. We want to bring the folks in Utah out here to the East coast IF WE DO IT. If we don’t do it, we would like to make another trip out to see the folks out there . Here in lies the rub. We cannot settle in our minds on a good bunking arrangement .
This is too much for an old folk to straighten out in his mind. I will have to get back with the family on that one. Who ever of the family members read this weigh in.
We also want to take another swing around the USA. I could arrange stops to promote the books. And stop to see the Utah part of our family at the same time. It is a thought.
In the back of my mind I really want to drive the ALCAN one more time. I loved the trip through Canada, especially the Yukon. So much to do and so little active time to do it in. Boy these decisions are rough. What would you do?
Nite Shipslog
PS:
Some things to think ponder:

*** The nicest thing about the future is that it always starts tomorrow.
** Money will buy a fine dog, but only kindness will make him wag his tail.
* If you don't have a sense of humor, you probably don't have any sense at all.
** Seat belts are not as confining as wheelchairs.
Posted by jack69 at 3:33 PM

I am not discussing any travels for you and Sherry. There is nothing wrong with you playing
in the back yard for awhile. This is a lovely
historical town with many places to site see.
Ha. If you invite the group we don't have a
swimming pool for the kids to play. If you would have keep that House on main street where you had the heated in house pool. I forgot Mark has a swimming pool and lives just about 4 blocks. But we would have to clean his house and that would take awhile

I think you should do it all! I'm sure you will make the best decision though for you, Sherry and your family; it all sounds great though!

you made me tired just reading about it. either i am getting lazy or you and sherry drinking from that fountain of youth ponce de leon was looking for in florida and keeping it a secret.
wow I would love to see that chinese theater and look for fred astaire footprints.
hey i have heard of opp ala. gonna look it up on a map and see if its near me.

The first picture of you, Sherry, and the twins is a very nice picture. The others are nice too. Thanks for posting them.

Such great pictures, Well, just where ever you go just take us along through your journal.

Sounds like you have alot of things planned to do. The first thing ya don't want to do is get yourself all stressed out making these decisions. Everything will fall in place just like it did for your trip to Utah last year. Slow down and smell the roses Jack, it'll all work out the way it's supposed to. I think Shirl gave you her honest answer without coming right out and saying it. You're all she has left, she misses her little brother, she wants you to come home for awhile.

Hi Jack, maybe you will make it to do all the things you have listed above lol. You and Sherry seems to be in good health. Make sure you keep us all posted with pictures of all the places.I enjoy looking at pictures and I think my children do to every time they come they get my box of old pictures down to look at.lol. I'm glad they enjoy them. Take care, jean

Love the pics...I would have done anything to have that little store to play with when I was little..how cool!

Whatever you decide to do...take lots of pics and bring back the memories to blog about so we can go along on the journey as well!