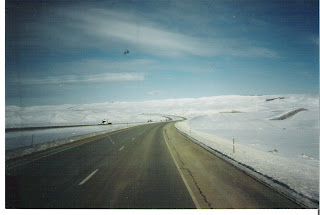 This is a picture of a mistake, we drove into Wyoming once on I-80 before 'SPRING' got snowed in because the interstate closed.


In 1955, Bill had a fifty one Studebaker. He found a great place to run our cars. They were building a new rail road track down to Plant Allen Power plant on the Catawba River. New packed earth and no tracks or ties yet. I followed him down in my Forty eight Chevy. What fun, racing, stirring up red dirt and dust. Neither car was all that fast but we were 16/17 it was just fun.
Bill was always around when I would come back to the Belmont area. I saw Bill a year or so ago and I knew I would never see Bill again, he looked like death warmed over. I told Tuck and a couple friends, “Bill is not long for this world.”
Low and behold I saw him a few months later and he was the picture of health. I joked about him cheating me out of a funeral. We had a lot of fun with it.
I was out by the camp fire yesterday, Sherry came to the door and said come inside, I could tell she was serious. “Look at the screen,” she said. On the monitor was an obituary, Bill’s picture staring at me.
“Well Bill Muse is now on the other side. He was one of the workingest guys I ever knew, his family is the same. Bill married the beautiful Brenda Sanders, they were married forty eight years.”
Amazing what you do not know about a friend. I never knew he was a Mason. I did not know he was the president of the first responder’s assoc. I did know he was retired from the NCDOT. I cannot remember when he did not work at least two jobs.

I DO remember one thing that my Sherry will never let me forget. I left Belmont early one Sunday evening instead of going to church, I was going back to the base, but I stopped by Bill’s to watch a black and white TV when Elvis appeared on the Ed Sullivan show. LOL. Bill’s family was one of the few families I knew that had a TV.
Rest in Peace Bill,
Nite Shipslog

I am sorry at the loss of your friend. I hate to say it again but as we age we see more friends names in the obituary than we like. It sounds like you gave him life again, and that is a good thing. Lucy

They said the Funeral Home was over flowing.
Firemans line up in uniform and stood there
until the viewing was over. Saw a group at McDonald from Charlotte that were going to his
funeral. They knew you but can't remember their
names. Glad I did meet him at Hardee's one morning. He was loved by everyone.

Sounds like you had such wonderful friends and I am so sorry to hear of your loss. Such a great tribute. Great entry.

I'm so sorry about Bill's passing; he sounds like a wonderful man; I bet his wife will enjoy reading Rags and how you honored Bill by naming a character after him

So sorry about the loss of your friend.

My sympathy to you and Bill's family. May he Rest In Peace. What a great tribute to him that you were inspired by him enough that you used his name in your book. So sad that he won't be able to read it but what a treasure it will be for his family.

PS: I'm glad you liked the link in my entry. I think it says so much. I know you couldn't hear the song but it is You Raise Me Up by Josh Groban. It was one of my sisters favorite songs and lifted her spirits on some of her hardest days.