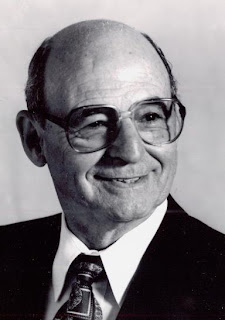 This is Bob Jackson....... A fine man The folks of Gastonia and the surrounding area will miss him.

Moving Day again. We are back in Belmont and Shirl’s back yard. We got a call from the Gazette reporter saying our story may run this weekend. I am looking forward to seeing what she has done.
There is a local restaurant, a cafeteria actually, called Jackson’s Cafeteria in Gastonia. Bob passed away last night. He was a very nice man who has fed the public good food at a reasonable price for 35 years. I sure hated to hear that. He was a man who kept his finger on the pulse of his businesses. At one time he owned 10 restaurants, he was down to three.
A few weeks ago as was his habit he was going from table to table visiting. They came to our table. He did not know me but he knew Vernon (Sherry’s bro). Vernon has had him appear as a guest entertaining seniors. Bob was an accomplished musician and singer. Anyway Mrs. Jackson commented on my hat while the others were visiting. I asked Sherry to find out the size. That night I ordered him one from a website that sells the original handmade Greek fisherman’s hats, size 7. The next week I took it in when we went to eat, The Jacksons were not in that night. I left the hat with his son.
Shirl saw Bob and he said he was thrilled with the hat and told Vernon the same. I am glad I did that for a warm sweet man, loved by his customers and staff. RIP Bob Jackson, 86.
Hope you are enjoying Spring, I am trying not to fuss about the rain considering the drought we were in.
Thanks for coming this way.
Nite Shipslog
PS:
Money can't buy happiness - but somehow it's more comfortable to cry in a Mercedes than in a Kia
No one knows when their end will come, the idea is to have the ticket bought , paid for and kept up to date.
Posted by jack69 at 2:42 PM

Bob was entertaining with the band at Holy Angels. His amplifier had been humming some but
when you pressed it with your hand it would stop. Well it was Bob's turn to sing and he had put his chewing gum on the end of his amplifier so I decided to sit on it. (WRONG) Didn't know about his gum so I got green gum on my left buttocks. That has been a joke every since. Wearing Bob's chewing gum on my behind. That will always be remembered. I got it off my
slacks thank goodness.

R.I.P. to a man who obviously brought a lot of joy to others!

That is a funny story Shirl, about the chewing gum!

So sorry to hear we've lost another good one. Prayers to his family and friends. I hope Shirl got her payment up front this time...ha. I know she's glad to have you back. Take care, Sheila

Sorry for your loss of Mr. Jackson. I'm sure many people will miss him. That was nice of you to buy him a hat he liked. Send us some rain, please.

sorry your friend is gone...but the hat...what a nice thing to do...made his day you did!!! and that pic of Sherry....just precious...wish I had one of me that age...LOL...but no go!!! and someone really likes you alot to have such a nice "parking spot"...flowers and all!!!! as usual your blog is like reading a good book...one good chapter leads to another...thanks for sharing all the good time...and hmmm....sorry someone stole your girl....but then you came out on top with the best pic!!!! right.....LOLOL...hugs toyou both...Ora in KY

So sorry for the loss of a friend...

Keeping his family and friends in my prayers..