I am Not a Fan of the Yellow Pages! 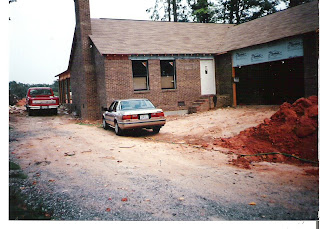 The house on South Main under construction. Note that NC RED mud! 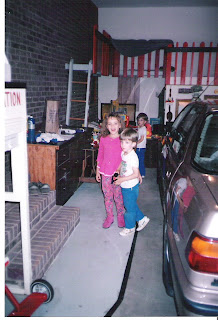 This is the front garage after the house ws completed. There is a Fire station on the left where the tricicle is parked.On back is a two story play house for the grandkids. This one had a all the amenities. for the kids. Here is Reece, Josh and Steve.

Now this is Josh as he has his two seconds crossing the stage.

First.... Speaking of graveyards. Our house on Main Street backed up to the city grave yard. Our grave plots are practically behind the house. I told Sherry I would be looking when she brought a man in the house and went skinny dipping, 'I would be the resident ‘haint’.' That is one reason she did not object to selling the house and moving into the woods. LOL
The Charlotte Airport was going to buy the home my sister Kat. She and her husband were in Florida for the winter when we decided to put our house up for sale. We drove to Florida with some plans and prices. WE all were excited and agreed to build the Condos. Sherry and I came back from Florida, put the house up for sale and called Sticky to start clearing this acre of land. I applied for the permits and started in earnest.
The house sold much faster than we expected, so we had to move. I didn’t learn too much from my first experience in the yellow pages, THE POOL MAN. So I looked there for a mover. None of the well known names could do it that soon, so I ran up on another full page add with six or seven phone numbers in all the surrounding towns. He must be safe. He could do it, but it would have to be on Sunday, the only day he had open. Mover arrived and started packing. WE had agreed that he would store the furniture and ‘stuff’ until I called. But I had to pay $750 for storage in advance. Okay. While they were packing my Bro in law comes over, looks at the tags on the truck, “Are they stealing your furniture Jack?”
Mr. Mover sticks his head out of the Van, laughing and said, “Yeah right here in broad daylight.” WE all laughed….. WRONG!
Truck left, I never thought a thing about it until time to get the furniture. First # disconnected., 2nd # disconnected (I was getting a sick feeling) on through the list, Nada. I checked the phone company all #’s had been shut off a couple months back for lack of payment. They are still trying to locate him to collect for the phones and yellow page ad of $4,500. They would appreciate anything I could find out. (HA!)
It took weeks to locate any storage stuff. Somehow we found ‘em about forty miles away in a ware house that was locked for lack of payment of rent. Contents to be sold to pay the bills. ( much took place) later I was accompanied to see if our stuff was there. Some of the larger items were there, but all the pilfer able items GONE! All electronics, micro etc.
The man was arrested. He had done this before. The Courts allowed him to declare bankruptcy, we got $3.75 I think. Plus the courts allowed us to take what was left. We had to pay another mover.
You just cannot trust the Yellow Pages, I don’t think. LOL
Thanks for coming this way.
Nite Shipslog
Posted by jack69 at 3:21 PM

What is that saying...fool me once, shame on you...etc, etc...ha. I think we all have had a horror story at one time or another. Wonder if he continued down that path or straightened up and flew right. Take care, Sheila
PS. I had to lighten up my pictures before I put them on the blog. They did turn out a little better than I thought they would.

Wow you can't trust anyone. That little episode would have had me plenty upset. I'm attached to my "stuff". That dirt sure is red. Does it stain the side of houses. Down here the wter where people let the sprinkler water hit the house stains it red especially out in the country. Shame on you teasing Sherry like that. I once wanted to buy a house across the street from a cemetary. I liked the house not the cemetary.

That sucks! Who the heck can you trust??? I had a bad moving experience via yellow pages too. I was quoted a 5 hour job with 2 guys. One stunk of booze and gave up after an hour, so the sober responsible one did the rest himself, skinny guy too, I had to help him. It ended up taking 10 hours, I refused to pay so drunkie threatened to take all my stuff. I had to call the cops and eventually we settled on me paying for 6 hours with no tip.

Tried today and it will not take my comments.
I am gettin my hammer ready. I bet it will take
this that is to funny.