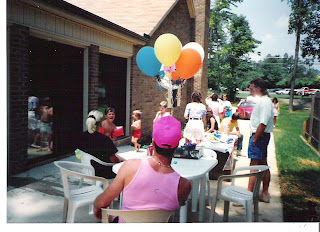 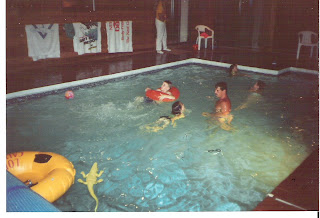 Another inside shot The dining room entrance is just beyond the standing person. 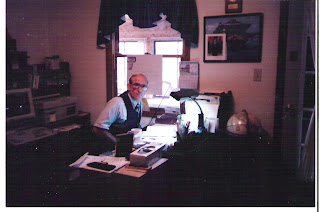 This was my home office. The pool is just outside that window behind me.
/To answer some questions.......

About our indoor pool. It was unique and the only one in town. Some folks have mentioned the cost and upkeep. We had never had a pool, but Sherry’s sister did. It was an outdoor above the ground pool. I helped open and close it every year. That is a pain and expensive. I declared if we ever had one, it would stay open year round. So when we got a chance to build another house, we planned it in. All I did was take an ‘L’ shape plan and make a square, placing the pool in the ‘L’.
Since I had never built an indoor pool I had a lot to learn. First of all that Pool builders have the worst reputation and the least reliable, of all construction groups. I went to the Yellow Pages and picked a nice looking ad. Called the guy, got references, looked at his work. Great guy! Huh uh! He was an out and out crook. Didn’t even pay for the $5,000 ad in the Yellow pages. But he built a solid pool (when I could find him). At the rough-in, I discovered the pool was out of square with the room and pointed it out. No problem he says, I will make the walls thicker on that corner. He did, once the concrete was in, one corner was Two feet thick. But I am ahead of myself.
The Concrete truck comes, and sits at the site. No moving. I asked what the problem was, pool man had told the dispatcher he would have cash, his checks always bounce. I had an account with the company and I told them to put it on my account, and I would deduct it from the price of the pool. We had the strongest pool in the world. He put so much concrete on the walls and in the bottom he lost all the drains, outlets and lights. Fortunately I had filmed the job and we could show the movies and locate all but one wall outlet. It is still there somewhere. Pool was finished, house was finished and no pool heater or pump. After much consternation He got the heater, I eventually installed it and the pump. It all turned out great in the end.
Upkeep, would you believe about $5 a year in chemicals? Yep. The only chemical was Muratic acid. I added about a quart a month. It started turning green once when we were gone, but it did not take long to bring it around. I had always wanted a pool to jump in after a hard day’s work, it was great.
Cleaning? Sherry would throw all the pool furniture in the pool, hose the tile deck down, remove the ‘washed’ furniture and vacuum the pool. About an hour.
But we wanted to travel and we could not think of leaving a pool with no one to watch it. Sooooo we sold it and built another. One of the local Textile mill owners bought it and paid cash.
We moved out of the house and into our motor home while we completed the two Condos. Life was good, BUT my son and building partner was not happy. He was upset that we would sell a house on Main Street and move out in the woods.
Long story about the move. Maybe I will tell it next. Our furniture was stolen, and I watched it, and then paid the guy before he left with it, another Yellow page story.. Easy? YEAH I am.
Nite Shipslog
PS: The pool was not that big an expense. It was going to be a nice home and adding the pool only cost us approx. $15K (since I was doing all the carpenter work electrical etc) but it added $75K to the value.
Posted by jack69 at 11:33 AM

cOOl that you were able to build a pool. I have never wanted one be rich or poor because of my fear of water. Joe is on his way to Cortland to have Ron replace our bumper. I hope Ron drags it out, I could use the break. Lucy

I don't want to read anymore about the house
with the pool it makes me sad. I might just
have to go up knock on the door and ask them to
move. They look like they are happy...Darn.
I see it just about everyday. I guess I will
just keep looking at it as I drive by.

It looks so inviting I can feel that cool water on my toes. We had an above ground pool one time and it was a mess but we had some fun with the kids for a while.

Love the house with the built in pool, I would love to have one , but I can't swim. To old and to tired, lol. Take care, jean

That was always a dream of mine too, an indoor pool. I lived in New Brunswick for a while, my best friend was a girl whose father was the "lumber king" of that province. They had an L-shaped home too with an indoor pool! It was a beauty!

Got the bumper and now we can stand each other but I think the secret was Joe got a good nights rest. When are you and Sherry going to take off on your travels? I loved Jeans comment about the pool. I agree with her. Memorial weekend I gaurantee it will rain here which doesn't bother me but the people that go camping. Been there and done that. To old.

I would love to have one, but will settle for one in a cabin when we go out of town on vacation in Tennessee...every now and then..lol