A photographer took these pictures and sold them to a Paris Newsaper. The first printing SOLD OUT. It took me awhile, not know ing how to put this back together, but I wanted you to see it, if you had not.............Jack

Swallows in Love and Sorrow . . . Swallows: Here his mate is injured and her condition is fatal.She was hit by a car as she swooped low across the road. 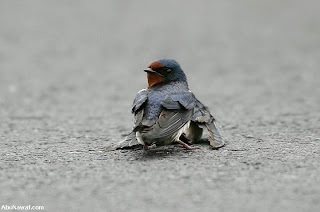 Here he brought her food and attended to her with love and compassion. 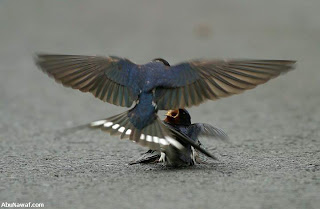 He brought her food again but was shocked to find her dead. He tried to move her, a rarely-seen effort for swallows 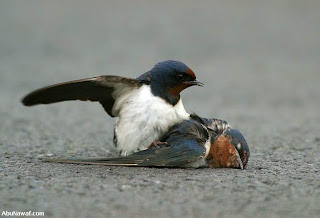 Aware that his sweetheart is dead and will never come back to him again, he cries with adoring love. 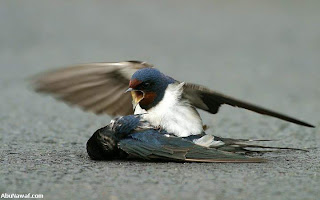 He stood beside her, saddened of her death. 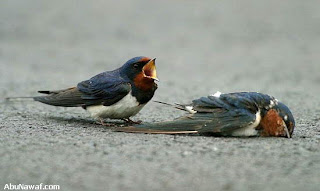 Finally aware she would never return to him, hestood vigil beside her body with sadness and sorrow. 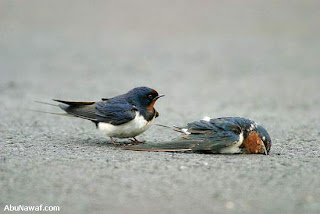 I thought this was such a great story of love in pictures.
Thanks for coming this way.
Nite Shipslog
PS:
Millions of people cried after seeing these photos in America, Europe, Australia , and even India . The photographersold these pictures for a nominal fee to the most famousnewspaper in France . All copies of that edition weresold out on the day these pictures were published.And many people think animals don't have brains or feelings!!You have just witnessed the Love and Sorrow

That was so sad to see but it's wonderful how animals and fowl stand by their mates. Yes they do have great feelings. Thanks for sharing. Helen

This was so touching. It applies to life when
a mate is left alone. We have known so many that
have been left and felt the same way just wanted
to stand there beside them. Truly a display of
love and sorrow. This is why I say if you have a
mate be thankful.

Oh dear, that was really heartwrenching.

oh dear Jack...you made me cry with these pics...and yes...our animal friends have feelings...you think my dog and cat don't show their feelings after being left along a good part of the day...wow..If I could can that energy...I would sell it for a price LOLOL...a good price!!!! your blogs sure do make my day!!! hugs...Ora in KY