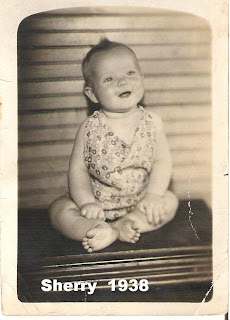 This is my girl Sherry sitting on her mothers sewing machine. It always amazed me how the machine folded into the cabinet. I thought it was sort of magic. 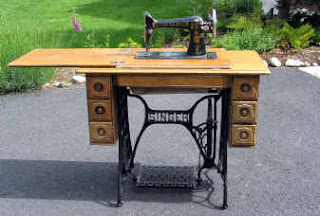 This was like Mama's singer that dad put a motot on later. 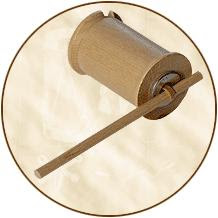 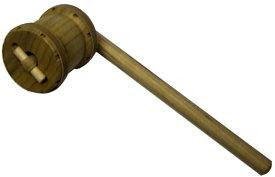 I miss folks sewing. Mama was real tolerant of me when she was sewing. There were times she would let me peddle as she sewed. The best things of the sewing was the wooden spools the thread came on. You could play for hours with those things. Daddy only once showed me how to make a spool tractor, and I made many of them after that. Mama was good about saving the spools for me. She used more thread when she loaded the bobbin, you could see the end coming on a spool.
We had a corner shelf stand, made by gluing spools together in three stacks and inserting a triangular shelf about every five of six spools. After that was done dad shellacked it. I thought it was beautiful. But it collected dust along with the knick knacks set on it. Daddy also used them for drawer knobs.
Mama could adapt to change better than anyone I knew. In Burlington, NC dad converted the old wood stove to kerosene. If mama burned the biscuits or ruined a cake because of the difference in heating, I never knew it. It was there that he had someone add an electric motor to mama’s sewing machine and she did not have to peddle anymore. She could make that thing hummmmm.
I never knew her to make a man’s coat, but I believe she could have. Now if you have never tried to sew you don’t know how to appreciate a real seamstress. You try to get a bunch of yards through and under the machine as you turn around and start back down a long seam. Mama could do it without missing a beat, and the side- by-side stitches looked perfectly alike.
In our early marriage we had a sewing machine in the house. Sherry’s mama had sewed also. We used the machine to patch mostly. Sherry did some light sewing with patterns. Once in North Missouri I decided to make Sherry a dress. I bought the cheapest material I could find (that is probably not being sure of one’s self). She picked the pattern. I did great until it came to the zipper in the back. It was a long zipper. No way could I sew a seam straight that far, and I didn’t. So I added a large ‘kite’ on the back to cover the zipper. I used three small snaps one in the top center and one on each shoulder, the bottom was loose so if the wind caught it you could see the lining. I was proud of the dress, but that was the first and last garment I made.
Tomorrow: Robbie took my Sweetheart.
Thanks for coming by the log.
Nite Shipslog
PS:
**** Scratch a dog and you'll find you have a permanent job.
*****. No one has more driving ambition than the boy who anxiously awaits his 16th birthday.

Sherry is so adorable! Wow, that is such a nice photo! My Grandfather had one of those Singer machines that used the pedal. I remember sewing on it actually, I made a few blouses using that machine. I've been sewing my own clothes, curtains and doodads for years actually, it's a very relaxing thing - but I have never conquered the sleeve properly! Great post!

All this is very familiar to me. Brings back memories. My daughter still has my mother's, it was my grandmother's old treadle sewing machine. She took off the many coats of dark stain or varnish, Underneath all that was a beautiful light oak cabinet. I also remember the spool tractors. We used to notch those edges to make the tractor climb over things LOL. Had more fun with them than a real toy but of course we never got any real toys. Helen

Mother made all our clothes. Our Sister could
sew she made suits. Mother made me a navy blue
coat because our older brothers were in the Navy. Mother made you a soldier uniform. In the 50's I made most of my clothes. Only sew today when it is necessary. Oh the good ole days.

I have a very old Singer much like that, but I am not the sewing type. Love the machine though, wouldn't part with it, & I do toss most things. The best part of this is that picture of Sherry on it, adorable. ~Mary

ps I'd have to agree about the call in the middle of the night. I once got one from someone who needed money. Never heard of him, and I was glad.

Cute picture of Sherry. I think my Mother-in-law has an old sewing machine similar to that. Take care, Sheila

No Jack that was my moms sewing machuine and she used to make me underpants, panties, if you want to be dainty out of flouer sacks that flkowt came in. Talk about rough tiull wahed a few times. I always begged her not to use the oarea with the flour logo. Sherry was just as cute as she is pretty, now. I am back in business with the PC, I think. HP made a huge mistake when they sent me a survery wanting to know how my last service was. More than likely they won't read it. They did screw me over big time and then You can not understand them. Missed you yesterday but was not sure how long this continues to work.

Sorry about the spelling. Chalk it up to being old. Lol Lucy