Watch out for Bears in the Smokies 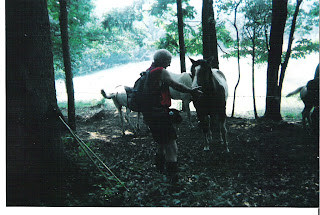 Here I am feeding some horses along the trail. The trail sometimes goes right through a pasture with livestock. 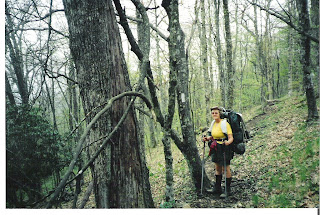 My steady beside the ever present white blaze of the AT 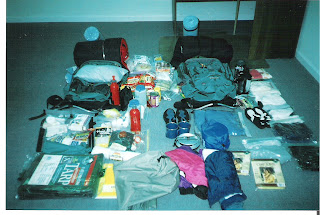 This is the stuff in our packs when we started. We did cut back some, but I still had over 50 pounds and Sherry over 30.
Today's insightful entry..... LOL

Just a little more on hiking and I will have to digress to the Smokies again. We stopped at Spence Field Shelter for the night. I was pretty scruffy, after about four days in the woods. I sat on a Rock in front of the shelter. I looked up and here was a neat young couple coming up the trail, they were not hikers and were dressed very lightly. The girl walked up to me and said, “Excuse me, but do you live here?”

I explained it was a hiker’s shelter and my wife and I were there for the night. We passed the time of day and they went on past the shelter on a side trail. I thought they would get lost, I did not hear any more about them, so they must have made it. They were staying at Cades Cove, and the trail they took did not go there.

Sherry just hates to hike without a bath. So just as soon as we stop for the day she heads off into the woods or the privy, and using ‘handi-wipes’ gives herself a bath. She never gets stinky like most hikers. LOL

The one reason I mention Spence Field Shelter is an incident that happened a few days later. We hike slow so the hikers behind us catch up and pass. One night we spent the night over looking a beautiful valley and a young hiker came in late. Everyone swaps trail stories but he had a good one. He stayed at Spence shelter a couple nights after us. In the morning he was preparing to leave, but took a run down to the privy, leaving his pack. He heard a growl and saw a bear dragging his pack off. He said he actually ran and did a tug of war with the bear for the pack, but lost. The bear dragged it off a piece and started going through the pack. He ate what food he could find along with his trail meds, Ibuprophen, salve etc. Then he left the pack. That was the only ‘bad bear’ encounter we heard of.

At night most hikers throw a rope over a tree limb and pull their packs up in the air away from animals, especially bears. You hang it after you have eaten and leave all food in the pack. You don’t want to invite the bear into your tent with the smell of chocolate or peanut butter.

God Bless America and God Bless all allied troops who are in harms way.
Nite Shipslog
PS:
'Those who hammer their guns into plows will
plow for those who do not.' ~ Thomas Jefferson

***** Your feet are bigger in the afternoon than any other time of day.

Now I'm counting my blinks, and YUCK on the spider fact! I've heard that one before actually...shudder!

Great story about the black bear, that would have scared me. I don't think I would have tried to wrestle my pack from him!

I would have let that bear have anything but me it wanted. I am with Rain for sure o0n the spider. Yuck yuck yuck, shudder

I believe I would have to think a little before
I had a tub of war with the bear. I remember when our family camped in the Hintogas (sp)and
the bear wanted our food that was in the trunk
of the car where Mother and I had bedded down
for the night. What a night.

Now you've got me blinking. I'm tired just looking at all that "stuff". I'm sure I'm not a hiker, I'm a rider around in the pick-up.

I wouldn't have chased that bear but then I suppose I would have gone hungry and thirsty after that. Like some of the others here I sit blinking my eyes only I didn't count them LOL. Helen

The bears would be what worried me the most on the hike. Take care, Sheila

Me...swallow a spider...in my sleep???? saints preserve us....gonna tape my mouth shut from now on before I go to sleep....thanks so much Jack...you give us food (sorry for the pun!!) for thought....but sometimes I would rather you didn't...and as for hiking...you enjoy...and sherry too....I am no hiker...unless it is around Walmart LOLOL...but that is flat...no bears....only a thief from time to time who will take your purse if possible....don't know which is worse??? anyway...have a great time...wherever you are!!!! hugs...Ora