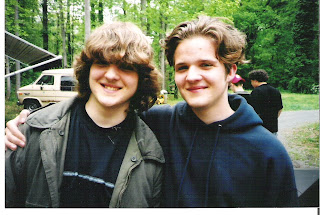 2001, Josh on the left Steve on the right (Steve had cut his hair I think for the lead in Grease.) 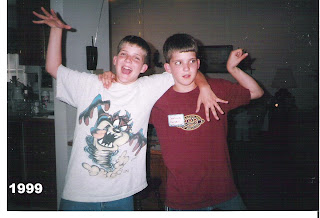 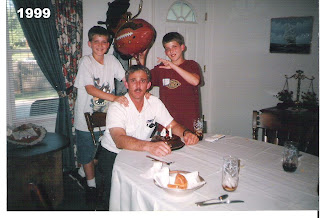 Here is Steve on the left and Josh on the Right. Jack their dad in the center! 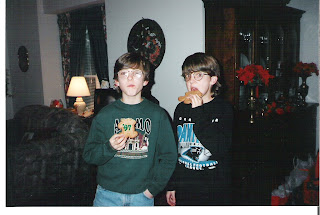 About 1997 Steve on the left and Josh on the right. (my opinion) 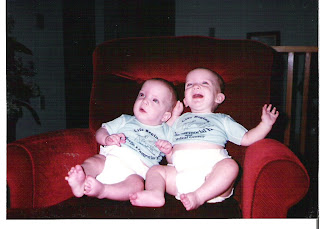 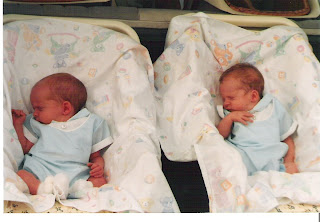 I will stay with Steve left and Josh right. 1987


TWODegrees! (THAT'S HOT!) and that is not the temperature!

My Sister Shirl was our families first High School Graduate. Sherry was her families first High School Graduate. I, another HS dropout, am surrounded by educated people. Over the years I have finally piece-mealed an education but have never crossed a stage to receive a diploma.
Today we have two grandsons who will graduate from college, the first college degrees in our family. I am sorta proud of that, NO! WHAT I MEAN IS THAT WE ARE REAL PROUD of that. Jack’s twin grandsons finish four years of college today. WOW, with scholarships and side jobs they have made it.
I am not going to be worried about the job market; they would be facing worse if they had not attended college. We cannot change the economy from this motor home so we will not cry (or try), we will just shout inside and out, YES! They did it.
WE will be at UNCC for Josh this afternoon. I said we, Sherry’s dates dropped out so I will go with her. (I NORMALLY DO Not ATTEND THESE FUNCTONS) I am not fussing about that either, I will be there and I will be proud. Stephen will come down from Mars Hill College later and we will all get together.
Tonight we celebrate our families FIRST COLLEGE GRADUATES!
Thanks for coming this way.
Nite Shipslog
PS:
'Those who hammer their guns into plows will
plow for those who do not.' ~ Thomas Jefferson
Having a child fall asleep in your arms is one of the most peaceful feelings in the world.
You should never say no to a gift from a child.
I can always pray for someone when I don't have the strength to help him in some other way.
TRUTH HERE!
This is one of the most important keys to a long friendship or marriage:
Being kind is more important than being right.
Posted by jack69 at 11:43 AM

Okay I scared myself, I thought I had lost this entry. I will add later pictures tomorrow. Seems I lose things when I push too far. I had later pictures the last try and it died. Glad at least part of them were saved.
Thanks for reading.
Jack

Yeagh for the graduates!! So many just do not make it. As for jobs their education will help tremendously but I would be suprised if it was almost instantaneous (that words is to big). I think my son is starting to worry. The dent and hail damage is ABOUT ALL DONE now. He is an EMT
and has tal;ked about taking a few community college classes to maybe get him work in a hospital. Lucy

Congrats to the graduates! Although I don't have children, I'd say that having pugs fall asleep in my arms is on the list of most peaceful feelings!
:-)

Congrats to your grandsons. I see they always put the same twin on the left. Was that so you could tell them apart? lol My youngest granddaughter will start college at the University Of Texas in fall and her sister is already there.

Congratulations to Josh and Steve! Sheila

Hi Jack and Sherry! There's a game of blogger-tag going around, and I tagged you both- you're it! It's my post for today, just some silly fun, I thought you'd both enjoy doing it!

How proud of Josh and Stephen to spend 4 more
years after HS. I'm sure they both will make it. They are talented and have good personalities and know how to mingle which is
very important. Knowing how to do PR.
We have good evening at the Grad Party. I know
the Grand Parents are proud.