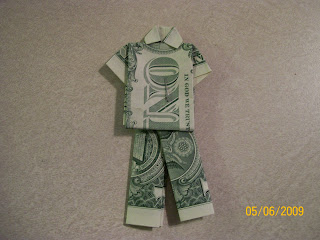 Robbie folded the dollars and gave them to us. He says he does this and then staples them to his business cards, Stop by Valdese and go to His accounting office and ask for his card. (It might work! No guarantees!) 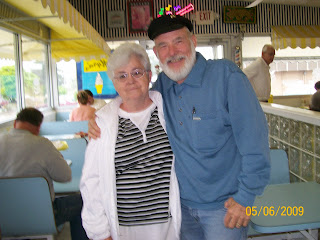 This is me and my first sweet heart, and she never knew it. She was the prettiest thing around until I came across my Sherry. 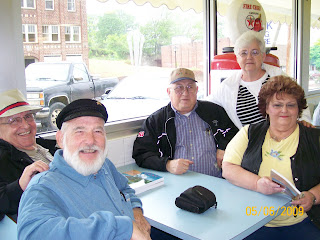 This is the bunch that got together to talk over old times in Valdese. L-R.. Jim Page, me, Robbie, Peggy and Linda, Jim's little sister. inda was working and had to get back to work.
Today's revealing entry!!!!!

Robbie Cook took my girlfriend! Well she never knew she was my first girl friend because she never asked me. Ha! She was for sure one of the prettiest girls around. I am sure Jim or Bub might have thought the same. I didn’t know Robbie was in the running, yet he got her, probably for being older and wiser. Plus he probably at some point told her he wanted to be her sweetheart. She was Betty Carswell.
They are a wonderful couple and have been married over 50 years. While we sat at the table Robbie folded some one dollar bills. The pictures are above of a shirt and pants. That is two dollars. He has an accounting business. He said he would do that and staple them to his business cards, novel idea. I took the $2, he gave Sherry $2 also. Jim bought the meal, man we made out!!!!! Thanks guys. I did ask Jim what time supper was, he never did answer. LOL
Okay so yesterday was the meeting,we got together with my old friend Jim Page in Valdese at Myra’s Ice Cream and Sandwich place. Jim had gotten Robbie and his beautiful wife Betty to come down also. We had a wonderful time. I forgave Robbie because I had found another beautiful girl, but this one I told her she was my sweetheart, if she would have me.….LOL.!
I would tell you I ate a foot long hotdog, ‘all the way’, but then Shirl would bitch at me about the cholesterol. But mainly she would bitch because she did not have one. LOL.
There are a lot of memories in the few years I lived in Valdese. We get to talk over a lot of them. I have good friends still living who are real sick. I asked about an Algebra Teacher, Mrs. Brevard. She is not well. I remember her very well, she was one of those folks who are natural teachers, or work at it so hard that they actually teach. I had Algebra I under her and got a B+. My next school in Algebra II the teacher was teaching the same thing Mrs. Brevard taught; when she gave a test she had bonus questions. At the year’s end I had a 110 average or an A+.

Valdese is a town in the edge of the South Mountains, the school was relatively small. The High School is run down, empty and windows are broken, and it is a sad testimony to the many students who learned there.
Thanks for coming this way,
Nite Shipslog
PS:
******. No one ever says 'It's only a game' when their team's winning.
******. I've reached the age where the happy hour is a nap.
****** Be careful reading the fine print. There's no way you're going to like it
Posted by jack69 at 1:41 PM

Rub it in you genius I had to work for my grades. Yes you are right I love Hot Dogs but
they are cholesterol city. Someone here in
Belmont was talking about Myra's Ice Cream having the best Hot Dogs they had ever eaten. I would love to see all of them again. Maybe next visit. I talked to my HS friends on the phone and see them at HS reunion. Nice place.

Well you have to splurge every now and then, especially if they have the best hot dogs. That was neat how he folded those dollars. Sounds like you are enjoying your time in the mountains.
Take care, Sheila

That's so neat! It's funny, when I worked as a waitress about 20 years ago, I used to make the little shirts out of bills too. I'd always tip the busboys with them, so they'd like me better and work harder in my section and it worked! ha ha.