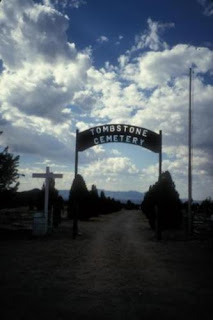 The cemetary just outside Tombstone.

Geronimo & FAmily, theis picture by Fly the photographer from Tombstone.

This is the close up of Geronimo captured by Fly's camera. 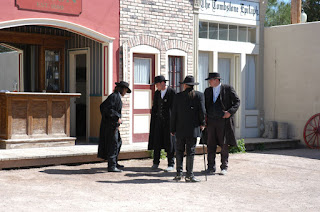 The Earps and Doc Holiday (actors) Just outside the Tombstone Epitaph.

Today's entry (Part of an article submitted to the local newspaper, never printed.)

Every boy from the 40’s and 50’s wanted to be a cowboy. I was able to satisfiy some of my yearnings by visiting Sedalia, MO, Dodge City, KS, San Antonio,TX, Deadwood, SD, Yuma, Cochise Stronghold, and Tombstone of Arizona. I walked in the actual alley, just behind the OK Corral, where the famous gunfight took place. Sherry and I loved these places. So much History, so many lives bigger than Life.

Western History refers to the incident as ‘The gunfight at the OK Corral’. It was about half-past two on the afternoon of October 26,1881. The gunfight actually took place on an empty lot, 15 feet wide and 30 feet deep, located behind the famed OK Corral. The Lot was bordered by the Studio-Boarding house of the famous photographer C.S. Fly and the Harwood house. The argument was between the law, being Chief of Police Virgil Earp, his sworn policemen and the cow-boys. The bone of contention being the town ordinance of not carrying fire arms inside the city limits of Tombstone, but that was not the only point of contention. When Wyatt arrived in Tombstone it was well known that he had cleaned up the town of Dodge City. Rough riding cow-boys were bad for business.

The leaders of Tombstone, mostly Republicans, wanted the same done in Tombstone. They were going to back Wyatt in the next sheriff’s election. In their opinion Sheriff Behan was not tough enough on the cow-boy element, and remained chummy for political reasons. There was also romantic jealousy involved in the affair.
Some little know facts:
Virgil Earp was in charge, a Deputy U.S. Marshall acting as Chief of police.
Wyatt, Morgan, and Doc were sworn ‘Special Policemen’.
Virgil and Morgan did not like Doc, and tolerated him because of his friendship with Wyatt. The friendship began when Doc saved Wyatt’s life in Dodge City.
The Earp’s were Republicans, the cow-boys along with their friend Sheriff Behan were Democrats.
The cow-boys were on the empty lot (just behind the OK) looking for Doc, to ‘do him in’. Doc and ‘Big Nose Kate’ lived in Mr. Fly’s boarding house. The window of their room faced that empty lot; Doc was not there at the time.
Mr. Fly was a very famous photographer. Without him we would have no pictures of Geronamo before his surrender. Fly went into the badlands and photographed Geronamo, his family and warriors during hostilities.
Wyatt had just recently taken Sheriff Behan’s girl friend, Sadie Marcus, and planned to marry her. Sadie worked at the famous ‘Bird Cage Theatre’. Sadie did become Wyatt’s third wife.
Western Tourist attractions are nothing like the attractions of the Coast’s. The numbers of tourists are small, allowing much more attention and time to look around. Tombstone is one of my top travel memories.
Nite Shipslog
PS:
Answers given by 2nd grade school children to the following question:

Why did God give you your mother and not some other mom?

2. God knew she likes me a lot more than other people's mom like me.

What kind of a little girl was your mom?

1. My mom has always been my mom and none of that other stuff.

2. I don't know because I wasn't there, but my guess would be pretty bossy.

Great post! Thank you for the history lesson! The only U.S. history I know is all the way back from Grade 10 "world" history - which really was just about memorizing dates unfortunately. Tombstone is my favourite western movie. I think I've seen it a dozen times.

I don't what has happened I will not post my
comments.

You have always been a cowboy at heart. Glad
you got to see all the places that you had listen to on the radio. We can get you some
boots and a cowboy hat and put some guns on
your hip in case you need to have a shoot out.

Hope this post. I have never had this happen
before. Maybe the distant is to short. HEE HEE
Thinks I should just deliver the message.

The West and cowboys have always been an interesting subject...and Wyatt Earp always a favorite...course there was Roy and Gene...but Wyatt was real!!! LOL...and Doc...good friend...mean drunk...but watched your back!!! yes he did!!!! LOL...good entry...good history lesson...I love the movie Wyatt Earp...was always happy that he was content in later life...or so the movie says anyway!!! hugs...Ora

Shucks you all used up all the good names. Jack are you doing something to stop Shirls comments!!! Ya better cut it out!!! Lucy

I was thinking the same thing Lucy, I think Jack's up to something.

Well I lived in San Antone and we went to Dodge City when we lived in Kansas. My hubby has been to Tombstone, when he was young and again when he was in Tucson on business. I don't guess 'Frontierland' in NC counts? I hope you, Sherry and Shirl are having a great Memorial Day. I know it's for the heroes who didn't make it but thank you for your service to our country. My hubby served in Vietnam. Take care, Sheila